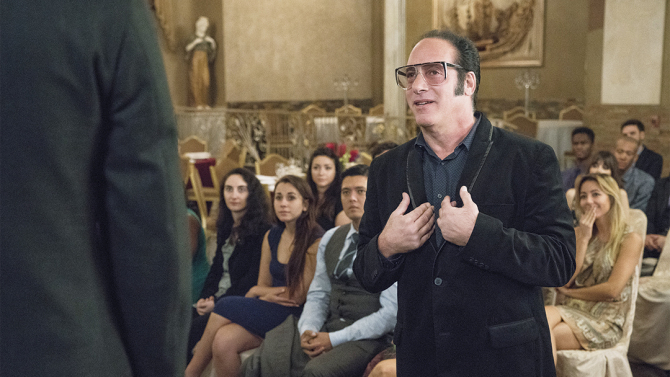 April 10 will be a big day for bingeing. All 13 episodes of Steven Soderbergh’s series “The Girlfriend Experience” will be available to stream that morning, as will all six episodes of Andrew Dice Clay’s new comedy “Dice.” But neither show will stream on Netflix, the company that made binge viewing a thing. “The Girlfriend Experience” will premiere on Starz, and “Dice” will bow on Showtime, dropping on their respective digital and on-demand platforms hours ahead of their cable-television debuts.

Having watched subscription video-on-demand services generate massive buzz by delivering seasons of shows in toto, some television programmers have taken to binge releasing as a way to set their product apart in the too-much-TV era. And more are following suit.

TBS made comedy “Angie Tribeca” available to stream when it premiered in January, part of a marketing offensive for the show that included a 25-hour marathon on the linear cable network. Parent company Turner Broadcasting had already experimented with binge releasing last year with TNT drama “Public Morals.” NBC did the same with summer drama “Aquarius.”

According to Weitz, shifts in viewer habits have made such moves low-risk.

“Those who consume on VOD and SVOD are a different consumer base than those who are going to consume things linearly,” he said.

But results have been mixed. “Angie Tribeca” had already been picked up for a second season when it premiered. “Public Morals” had not, and was canceled after its first. The drama debuted
to a decent 519,000 viewers 18-49 in Nielsen live-plus-seven numbers, but quickly fell off. The series finale drew fewer than half that number.

More precipitous was the decline of “Aquarius.” The series bowed to 1.9 million viewers in the demo, but the finale drew only 490,000. NBC renewed “Aquarius” nonetheless, citing multiplatform success. But the network hasn’t made a decision regarding future release strategy.

Ad-supported NBC and TNT can draw a straight line from bad ratings to low revenue; premium networks such as Showtime and Starz, not so much. Dependent on subscriber dollars only, the premium nets are emulating the streaming services in more than just scheduling strategy. In December, Starz announced a deal that allows Amazon Prime customers to subscribe to the network without a cable subscription. Showtime has similar deals with Amazon and Hulu. It makes sense for the premium cablers to deliver product to a growing base of paying
customers, digital or otherwise.

“Once you subscribe to Showtime, we’re happy to share our programming with you; that’s the beginning, middle and end,” said Showtime programming president Gary Levine. “Exactly what the timing is — exactly what device you watch it on — is practically irrelevant to us.”

check this out on variety.com