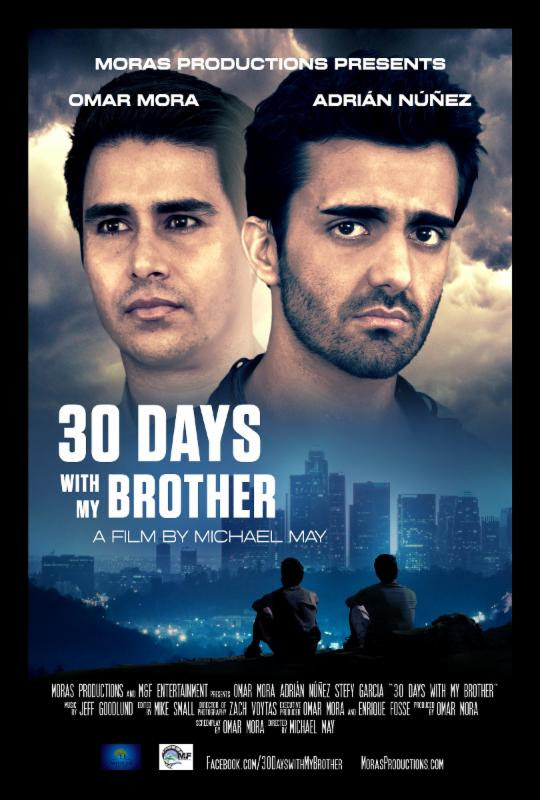 Moras Productions and M&F Entertainment announced today the release date for 30 Days With My Brother. The independent film will open on April 8, 2016 with limited distribution in select markets through AMC Independent™. The emotional drama directed by Michael May, stars Adrian Nuñez and Omar Mora who also wrote and produced the film. 30 Days With My Brother is also being distributed in Puerto Rico by Caribbean Cinemas.

Omar Mora is the first Puerto Rican from the island to produce a film resulting in national distribution in the states through AMC Independent™. A feat not to be taken lightly, Mora has been working towards this goal since he began his writing career in 2012 with the intention of documenting his stories and producing them into feature films. As a member of the National Association of Latino Independent Producers (NALIP), Mora has benefitted from their programs and workshops and has learned the ins and outs of independent filmmaking. It was at the 2015 NALIP Media Summit where Mora learned about AMC Independent™ through the workshop, The Big Screen: How Tech Enhances Movie Distribution presented by AMC Theatres. Led by AMC Theatres' Nikkole Denson-Randolph, the workshop provided Mora with the knowledge and tools needed to successfully distribute his film in the US.

"The AMC workshop I attended last summer was one of the best experiences ever...I received so much valuable information which is currently helping me market my film," said Mora about the workshop. He added, "I attended so many workshops and conferences at The Summit and learned so much, that it gave me the confidence to self-distribute my film, something I never thought I would do."

A heart-warming drama, 30 Days with My Brother is the story of two brothers who are forced to confront their past, themselves and try to restore their relationship as brothers. Starring Omar Mora and Adrian Nunez, 30 Days... is a highly emotional look at the lives of two brothers from Puerto Rico who are separated by a tragedy at a young age. After 17 years they reunite, one a doctor with a secret, the other a dark, somber character holding on to the past.

AMC Independent™ dedicates over 20% of their theaters to showing independent films throughout the year, including AMC-exclusive releases. Their goal is to engage and inspire audiences and at the same time, give distribution to independent filmmakers.

30 Days With My Brother also star Stefy Garcia, Evelyn Michelle, Amy Schloerb and Enrique Fosse. The film was written by Omar Mora and produced by Moras Productions and M&F Entertainment.