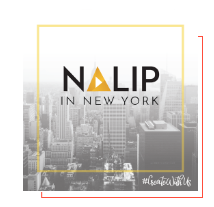 Executive Director Ben Lopez is currently in New York attending the Tribeca Film Festival, along with NALIP members Cecilia Aldarondo, Cristina Ibarra, Alex Rivera and Inti Cordera. Both him and our membership is looking forward to meeting NALIP members and supporters from the East Coast throughout their time there!

The festival kicked off on Wednesday night and will run until Sunday, April 30. Now in its 16th year, Tribeca is showcasing a diverse set of films exploring different subjects from all around the world. For those of us into Latino films, there is a lot to look forward to this year. The line-up includes projects across various platforms- the big screen, television, the web and even virtual reality.

One of the big projects making a debut at the festival this year is Iñárritu’s ‘Carne y Arena,’ a virtual reality experience which takes participants through the journey of immigrants and refugees. Iñárritu will be participating in Tribeca’s famed Director's Series, where he will be sitting down to talk with performance artist Marina Abramović. In en equally-fascinating conversation, Robert Rodriguez will also be taking part in the Storytellers Series with legend Barbra Streisand.

‘Nobody’s Watching,’ by Argentinean Director Julia Solomonoff, will have its world premiere in the International Narrative Competition. The film follows a famous Argentinian actor, Nico, as he leaves his home country in search of making it big in New York. When friends from Buenos Aires visit him in the Big Apple, Nico must juggle his old image in Argentina with his new reality as a struggling actor. In the film, Solomonoff paints a portrait of immigrant solitude.

Colombian-American co-production ‘A River Below’ by Mark Grieco will also have its premiere in the World Documentary Competition. The documentary touches on ethics of activism in the modern media age, as it covers the dwindling population of the indigenous pink river dolphin in the Amazon. As a marine biologist and a famous TV star work to raise awareness and protect the species, they find that their approaches to doing so clash. After a scandal erupts, there are big ethical questions that come up.

Other films that will premiere at the festival include ‘Samba,’ directed by Laura Amelia Guzmán and Israel Cárdenas from the Dominican Republic, and ‘Elián,’ by Tim Golden and Ross McDonnell. For a full list of must-see Latino titles at Tribeca, click here.

The TFI at TFF Party will also be taking place this Saturday, April 22 at 8 p.m. The event highlights another year of powerful stories told by a diverse and creative group of filmmakers and creators. Ben Lopez will be in attendance at this event, and we encourage our membership to be present and spend a night networking and celebrating with other NALIP members. Those interested can register here. We want to hear from you!

We are thrilled to be a part of Tribeca this year and can’t wait to attend the remarkable screenings and sessions throughout the festival. Make sure to keep an eye out for our NALIP members attending these events, and don’t forget to take advantage of our Spring Special for our 2017 Media Summit, coming June 22-25, 2017!