Meet the Women Speaking at the Diverse Women in Media Forum 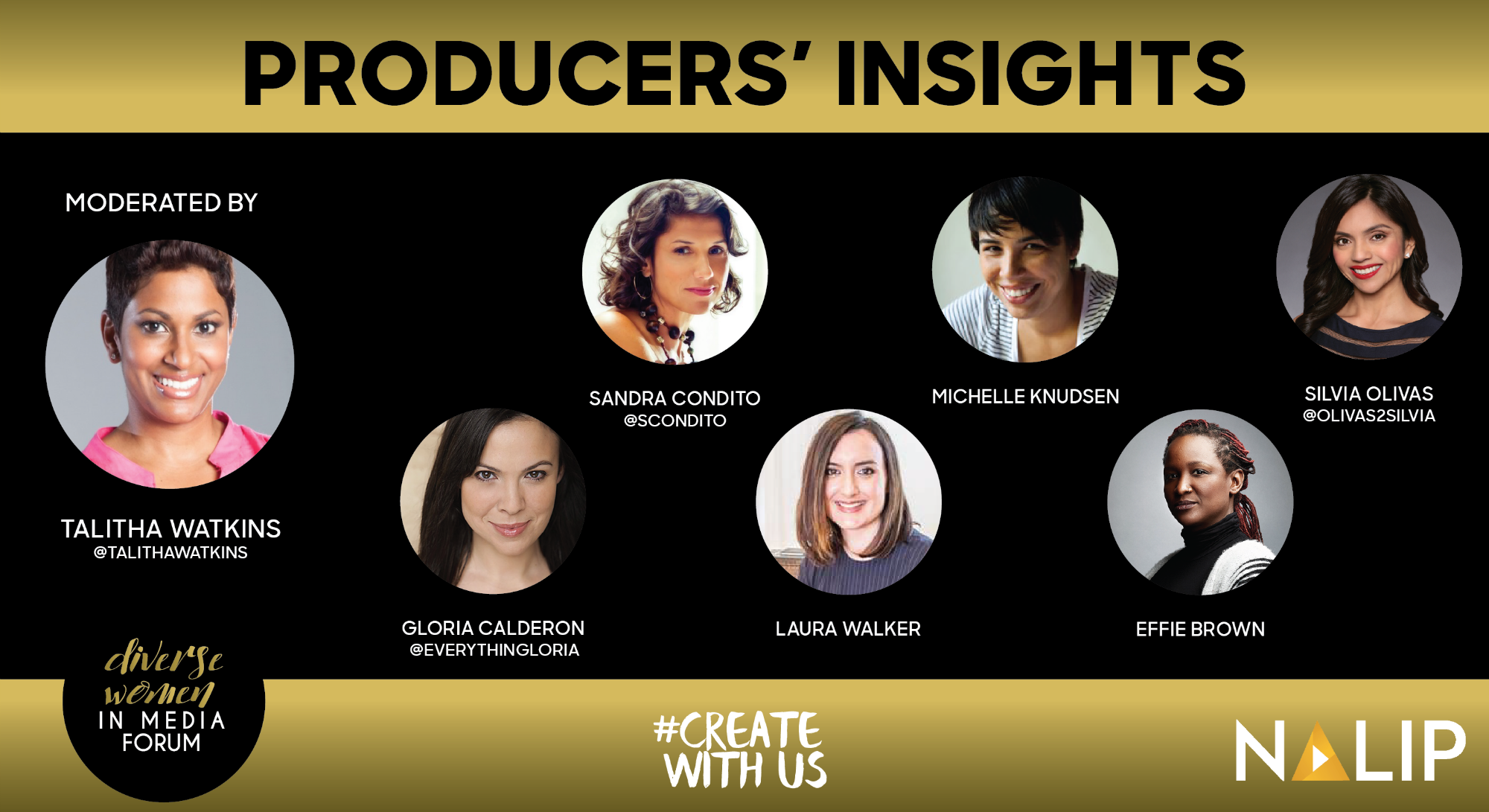 NALIP is excited to announce the Diverse Women in Media Forum speakers for December 6, to be held at the Pacific Design Center: Spectra. Attendees will learn from dynamic industry women leaders, hear thought-provoking sessions and come away with new tools, ideas and connections to influence the future of women in media. 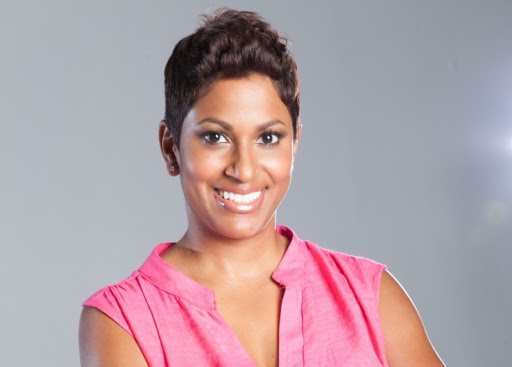 Talitha Watkins is an Executive in the Lifestyle group at leading entertainment and sports agency Creative Artists Agency. Based in the Los Angeles office, Watkins helps build out the agency’s multicultural business and capabilities, and creates enterprise opportunities around diverse talent. Watkins also provides insights on multicultural audiences and markets to CAA’s motion picture, music, marketing, and television clients.

Watkins came to CAA after six years as Vice President of Multicultural Marketing at Universal Pictures, where she worked across all marketing divisions, including publicity, media, digital, creative, research, and partnerships, to maximize the studio’s outreach efforts to African-American audiences. While at Universal, she worked on numerous films, including the multicultural blockbusters FAST & FURIOUS 6, FURIOUS 7, and the record-breaking STRAIGHT OUTTA COMPTON. She was also instrumental in supporting the success of African-American films, such as the box-office hits THE BEST MAN HOLIDAY and RIDE ALONG.

Prior to Universal Pictures, Watkins was an Assistant General Manager with Telepictures Productions, Inc. and oversaw operations, sales, and marketing for five female-focused digital properties in the Warner Bros. portfolio, including Ellentv.com, Extratv.com, and TyraShow.com, as well as worked in a development capacity for Essence.com. 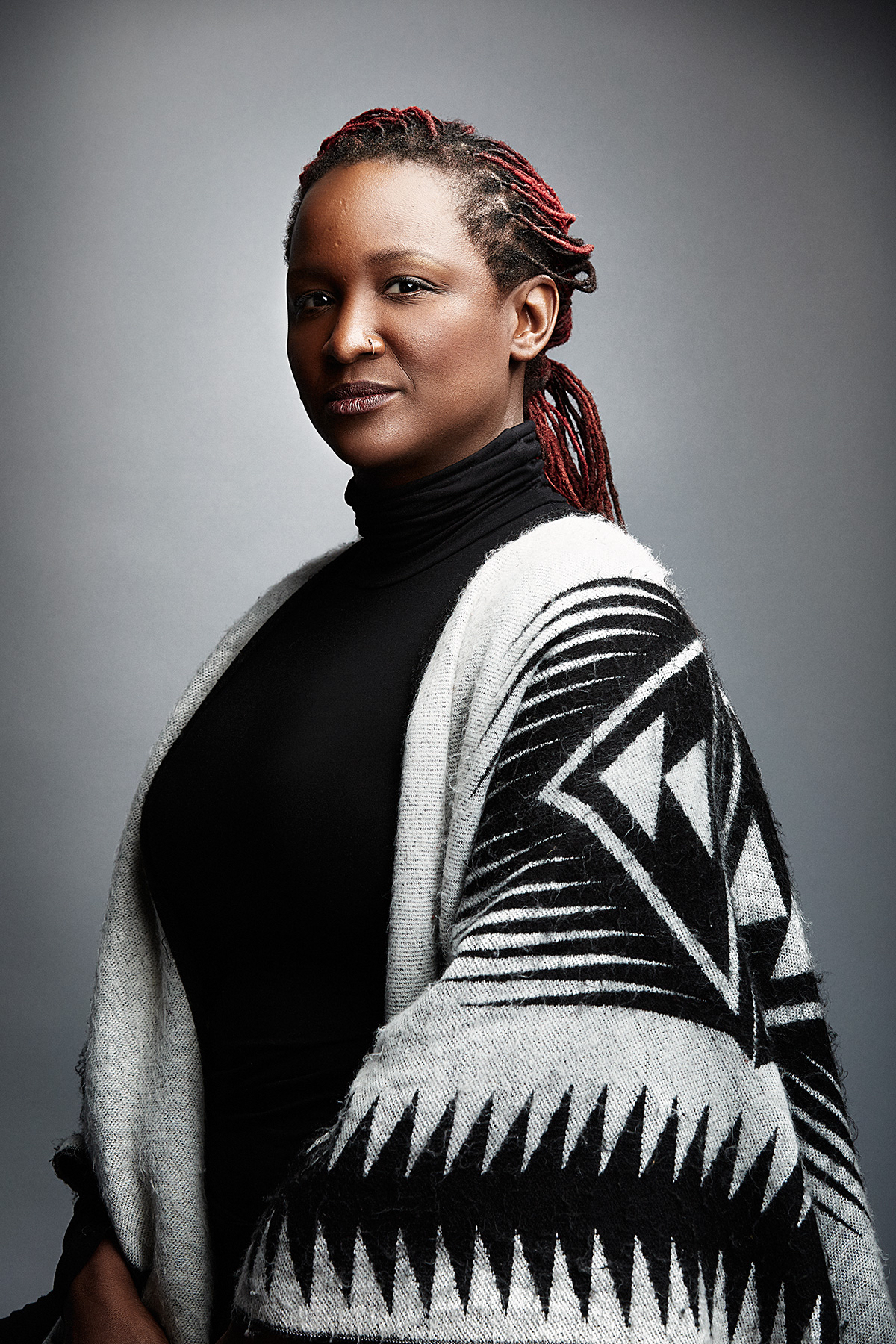 Effie T. Brown is a film and television producer, known for the highly acclaimed independent feature Dear White
People . She currently serves as Executive Vice President of Development and Production for Lee Daniels
Entertainment. Through her company, Duly Noted, Inc., Brown is producing the Lionsgate feature Flyy Girl  (based off the best
selling novel by Omar Tyree) and she recently sold The Good House ( by acclaimed novelist Tananarive Due) , to
Lifetime films.

She has produced several critically acclaimed HBO Films and award-winning projects including Stranger Inside ,
Jane Campion’s In the Cut, Real Women Have Curves , Everyday People  and Rocket Science. In 2015, Brown
joined Matt Damon and Ben Affleck as Producer and Mentor in the controversial reboot of Project Greenlight.
With a love of multiple platforms Brown focused on digital episodic content and produced over 130 episodes of
WIGS, an award winning, original content channel funded by Google/YouTube. Currently, the number one
scripted channel on YouTube, WIGS has recently been picked up for wider distribution via Hulu. 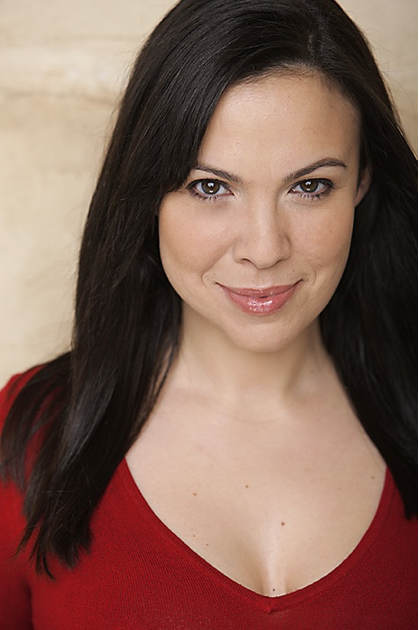 Gloria Calderón Kellett is the executive producer and co-showrunner of the upcoming Netflix series “One Day At A Time.” The series, which is a reimagining of the classic 1970s sitcom from Norman Lear, will now shift its focus and center on a Cuban-American family led by a recently divorced, former military mom, her two children, her old-school, Cuban-born mother, and their quirky building manager.

Previously Gloria served as a writer and Supervising Producer for the series "iZombie” and has worked on several additional TV series including "Devious Maids,” "Rules of Engagement" and "How I Met Your Mother" during which she won an Alma Award for Outstanding Script. Gloria graduated from Loyola Marymount University and her first play "Plane Strangers" went on to win the Del Rey Players Playwriting Award, and the LMU Playwright of the Year Award. Gloria went on to earn a Master’s degree in Theatre from the University of London. Her play, "Dance Like No One's Looking," won the International Student Playscript Competition.
Since her return to Los Angeles, Gloria has been a founding member of the sketch comedy group And Donkey Makes Five. Her book, Accessories , has been translated into Italian and in her free time she teaches and lectures about writing and on occasion she acts. 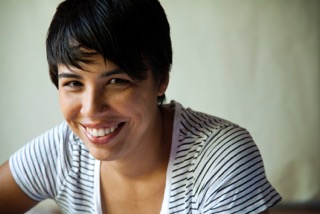 Michelle Knudsen manager and producer at MXN Entertainment will speak at our Diverse Women in Media Forum this December 6th at the Pacific Design Center. After graduating from Columbia University, Michelle Knudsen got her start working for agent Sarah Self at Gersh NY before moving to LA. She then partnered with manager/producer Mason Novick, jumping immediately into production on "500 Days of Summer."  MXN has since gone on to produce "Jennifer’s Body," "Young Adult," "Bad Words" among others.  Michelle also produced the music documentary "No Cameras Allowed" for MTV.   Most recently,  MXN wrapped on Netflix production "When we First Met," starring Adam Devine and Alexandra Daddario. In addition, Michelle is a lit manager for writers and directors. 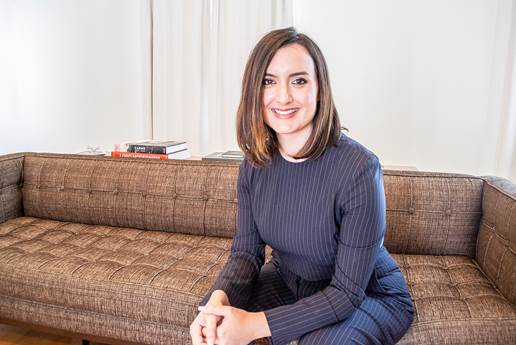 Laura Walker has over ten years of experience in film which spans production, post-production, financing, packaging and domestic sales.  After graduating from the University of Texas, Laura worked on projects like “Boyhood” and “Friday Night Lights.”  However, most of her career has been spent at Creative Artists Agency where as an agent, she put together films like “Still Alice,” “The Master,” “Under The Skin,” “Spring Breakers,” “The Heat,” and “Neighbors.”  She now runs AG Capital, which is a film and television equity fund that is focused on supporting proven and exceptional content creators in the film, television and digital spaces.  AG Capital is based in Los Angeles, CA. 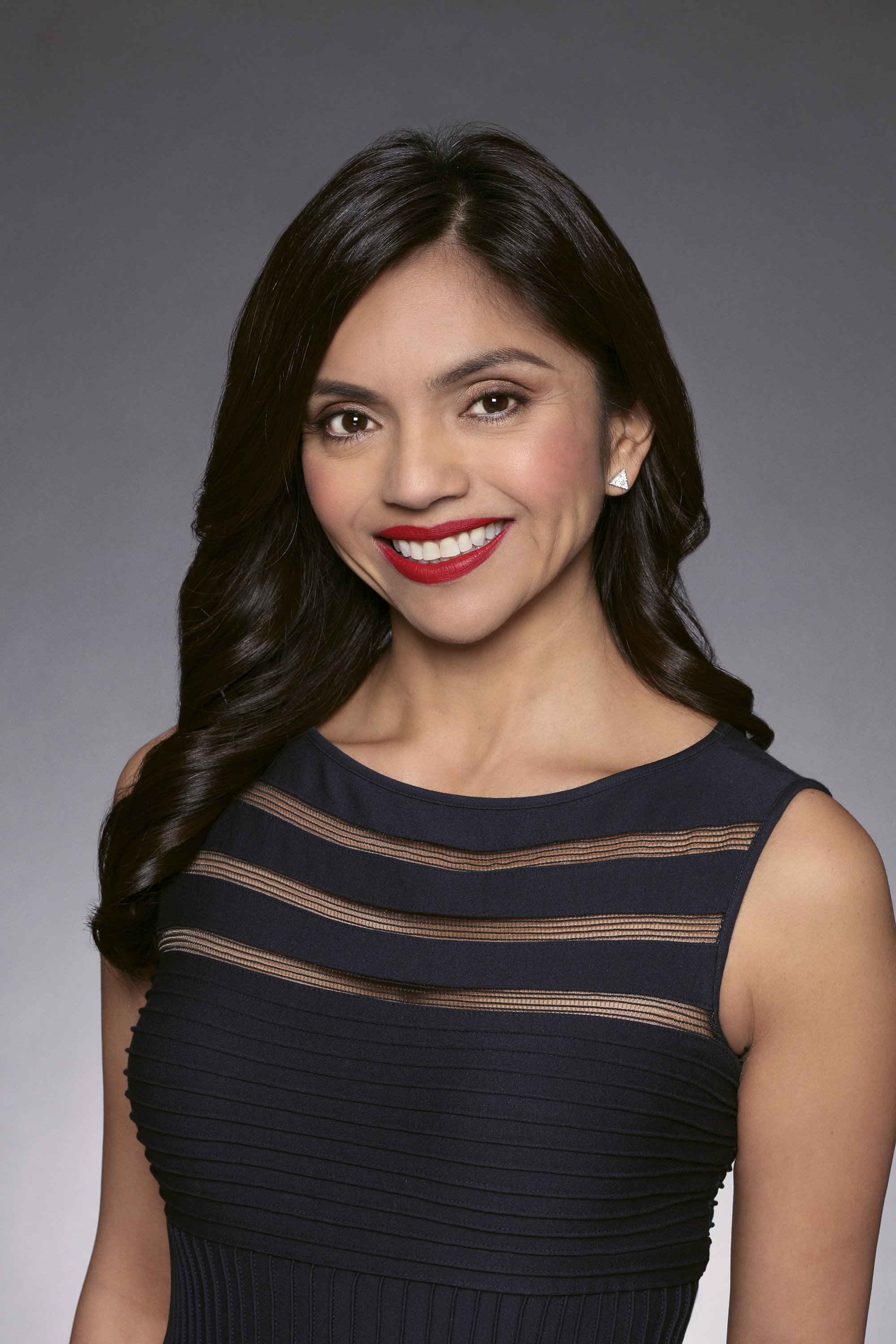 Olivas began her career in television as a stage manager on "El Show de Paul Rodriguez." She served as a writer-producer on the hit series "Moesha," and wrote and co-executive produced "The Brothers Garcia," for which she was nominated for a Humanitas Award. Wanting to try her hand in the world of television animation, Olivas wrote her first animation script for Disney Channel's "The Proud Family." Her additional animated television credits include Disney Junior's "Special Agent Oso," "The Misadventures of Maya and Miguel," "Martha Speaks," "Fatherhood," "Pound Puppies" and "Olivia." 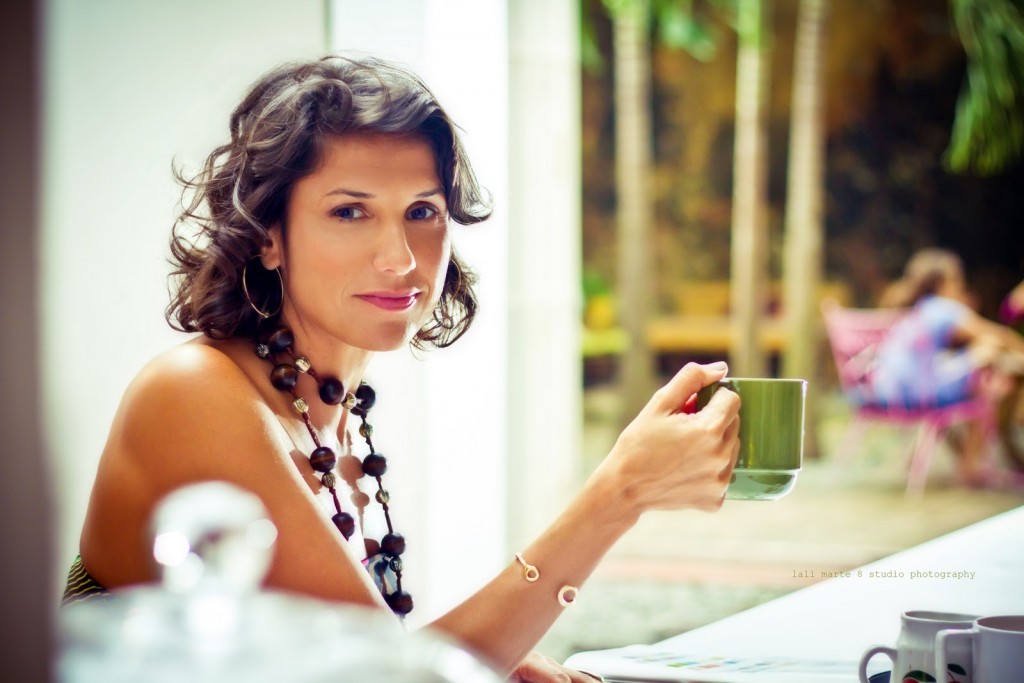 Prior to her role as President of Production at Straight Up Films, Sandra handled acquisitions, development and production at Pantelion Films, where she was involved with the feature films, Girl in Progress, starring Eva Mendes, and Casa De Mi Padre, starring Will Ferrell. She has also served in various executive capacities at Miramax/Dimension Films where she was integrally involved in all areas of filmmaker Robert Rodriguez’s Troublemaker Studios, including fostering the Company brand as well as developing its box-office franchise hits Spy Kids, Sin City, as well as Grindhouse, starring Kurt Russell, also for Dimension Films, and Once Upon a Time in Mexico, starring Johnny Depp and Salma Hayek for Sony Pictures. Condito began her career as a publicist at Miramax/Dimension Films, where she executed publicity and marketing campaigns for Malena (Monica Bellucci), The Faculty (Josh Hartnett, Salma Hayek) and the Academy Award winning Life Is Beautiful (Roberto Benigni), among others.