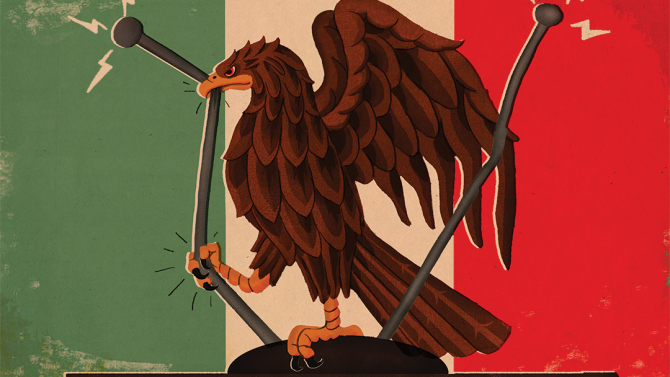 Mexico’s broadcast industry has fallen on hard times, but no network is facing a tougher challenge than TV Azteca. Caught in the whipsaw of the country’s rapidly changing media landscape, with laws designed to break the TV duopoly market leader Televisa and Azteca have enjoyed for decades, the network’s outlook is worsening amid plunging ad revenues, soaring costs and stinging competition.

Benjamin has been responsible for such short-lived programs as gameshow “Asgaard,” which features costumed contestants vying for prizes in a show colored by Norse mythology; sci-fi-tinged drama “Drenaje Profundo” and action series “La Teniente.”

Unam U. sociology professor Raul Trejo says Benjamin Salinas “has a history of leading very bad programming.” His  track record has not inspired confidence in his ability to jump-start innovative content, which TV Azteca desperately needs.

Notes Jorge Bravo of industry consultant Mediatelecom in Mexico City: “It’s been a very difficult year for both Azteca and (rival broadcaster) Televisa, but especially for Azteca. They are not growing, telenovela production is stalled, they don’t have a pay-TV distribution platform, and while they are working to improve news, it’s not enough.”

Azteca posted a $127 million nine-month loss compared with a $6.5 million profit over the same period a year ago.

A weakening peso hiked international content and production costs to 71% of revenues from 60% year over year. Azteca imports a large chunk of its content for flagship Channel 7 from Disney, Fox and Sony. Its other channel — Channel 13 — airs mostly local soaps.

Meanwhile, Mexico’s 2013 telecom and broadcasting reform will bring new digital rival Cadenatres to the fore this year, further pressuring Azteca’s domestic sales, which account for the bulk of its revenues.

“Cadenatres is not going to affect Televisa’s dominant position, but it could start denting Azteca’s,” Bravo adds, noting that the digital network is expected to account for 8% of the TV audience in five years.

Azteca’s main problem seems to be its snail-like reaction to a rapidly changing market, which the reform laws have shaken up through monopoly-busting regulations, new digital channels and an analog-to-digital switchover — the so-called Apagon Analogico, which was scheduled to take effect Jan. 1, though that action has been delayed.

“There is a huge opportunity to grow Totalplay, as well as Azteca’s fiber-optic Internet and pay-TV businesses,” Bravo says, but adds that the network needs to invest $400 million by 2018 to flesh out Totalplay. “Televisa has 62% of the pay-TV market, followed by Megacable,” and there is rising competition from Cablevision and Axtel. According to Bravo, Azteca has less than 1% of the pay-TV market, even though it controls 30% of the open-air spectrum. Televisa, in turn, controls 70% of the open-air market.