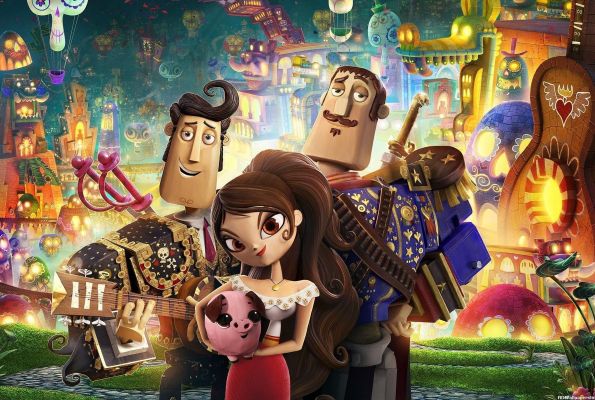 The new animated film The Book of Life, directed by Jorge Gutierrez and produced byGuillermo del Toro, looks like a game of Candyland exploded in Mexico during Día de Muertos. Voiced by a star studded cast of mostly Latinos, it’s steeped in Mexican culture (there’s bullfighting, churros, late-night serenatas, and Café Tacvba is on the soundtrack) but tells a charming love story that anyone can relate to.

It’s a star-crossed lovers tale, but with a feminist spin. Manolo Sánchez comes from a long line of matadors but his heart isn’t in it. He’s a sensitive fellow who can’t stand to kill a bull and just wants to sing and play his guitar. Plus, he’s too busy falling in love with a strong-willed and independent young lady named María who’s also being courted by Joaquín (who happens to be Manolo’s best friend.) When Manolo and Joaquín fight over her, she sternly tells  them, “I belong to no one.” There’s a bet over who will win María’s heart that sends Manolo on an epic journey through fantastical worlds (like the Land of the Remembered that promises all-you-can-eat churros) and his fight to get back to the Land of the Living.