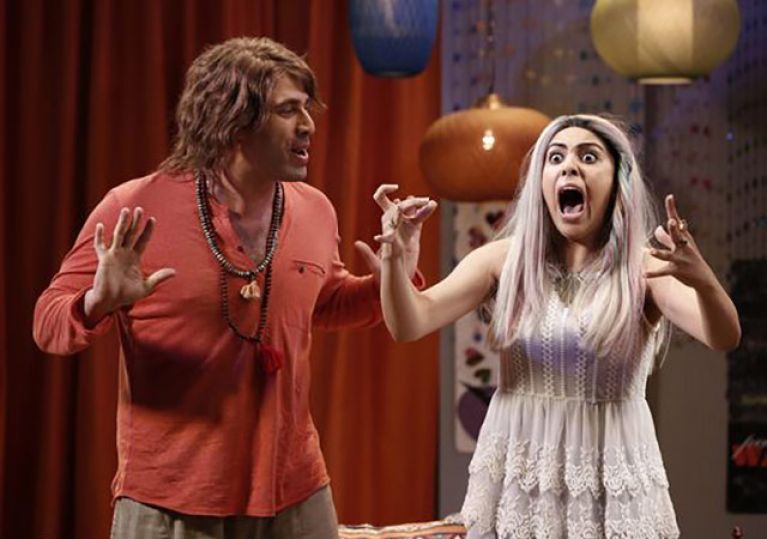 While Saturday Night Live cast members are dropping faster than your morals at last call on a Friday. But who needs SNL anyway? Latinos don’t because well, they almost never cast us (save for Fred Armisen, Horatio Sanz). Enter the revamped, reboot of the sketch comedy show, MADtv, which now airs on the CW. No need to start online campaigns for MAD to hire minorities—their cast is literally the United Nations of comedy. And, of course, we’re all about Michelle Ortiz—the Latina who gives Dora the Explorer a ‘hood vibe, makes Sofia Vergara’s accent funnier, and has the ever-contorting face of an emoji. Get to know your new comedy crush.

You were in almost every sketch in the season’s first episode.

The first episode is kind of the Michelle show. It wasn't on purpose. Even the writers and producers didn't realize how much stuff I was in until the night of the last taping. Actually in the last taping, I wasn't in that much to balance it out.

You also imitated Melania Trump, which is ironic because you’re Latina.

I thought people would be commenting more about that, but actually people paid more attention to Dora. They didn't really give any shot outs to my Melania and they ended up using the take where I improvised a lot for the actual show. I can guarantee you will see Melania again in episode two.

How did you get into the arts?

I always did musical theater growing up. That’s why I feel sketch comedy came so easy to me. I've been doing characters since I was little but not really knowing I was doing impressions. My mom always says she knew I was going to be a comedian when Family Matters would come on and I would imitate Steve Urkel. That was my first impression.

Did you ever audition for SNL?

I did. What’s so crazy is that in middle school I would stay up and watch both MADtv and SNL at the same time. I always like MADtv better, but then it got cancelled so I was like, “I guess I’ll try getting on SNL.” And then this came back on. I was like, “I'm happy now I won’t try for SNL.” I didn't try out, they were interested in me after they saw my CBS showcase and they reached out. They were like, “Maybe we can see you in New York.” They were interested and then luckily MADtv happened like a month later. All within the last year.

And you would’ve been the first Latina cast member on SNL.

That was my plan. I was like, “You know, fuck it. I'm gonna be the first Latina on SNL.” That’s gonna be my title. But it just never happened and then a month later I got the audition for MADtv. I guess it was just meant to be.

Correct. I feel like MADtv, even back in ‘95 when it first started, when it casted its people they were really color blind. They were just looking for the best or most alternative, or the most contemporary actors that people can relate too. They never forcibly were like oh let’s make the show about diversity. I'm not even the first Latina onMADtv [Anjelah Johnson] so I think that’s what sets them apart from SNL.

As the only Latina on the show, will you impersonate every single Latina celebrity?

That’s definitely what’s going to happen. For the audition I did Penelope Cruz, Sofia Vergara and it’s an honor and privilege to be the only Latin cast member. I was so adamant about getting my Dora the Explorer character in there because I feel that she is a very positive Latin role model for kids. So to take her to the adult situation shows that there’s a lot more to us than being rapists and migrant workers.

When did you realize you were funny?

I still don't think I'm funny. Growing up I was always imitating Shakira and Christina Aguilera for my parents. My dad is from Tijuana and for the summer times we’d always be there or anywhere in Baja, California. There was this one time when I was really little, I think like 7, and we were at some hotel resort where no one was there and they ere like Oh Michelle sing us a song, because I had been taking private voice lessons when I was young and I was like okay! So I get up in front of the pool on the deck and I started singing "Let me Entertain You", and I'm doing all these weird dances and I finish the song and this is just to my mom, dad and little brother who are in the water, and all of a sudden I hear all this singing and applause and it’s as all these drunk people watching me from their balconies from their room and they were cheering anchor, I just jumped in the pool, I had no idea they were watching, so maybe that’s when I first realized I could entertain. I'm gonna say between 7-9 buy its probably 8 because I hadn't done my first musical yet.

Who are some of your comedy idols?

Alex Borstein. She had the Miss Swan character on MADtv. Maya Rudolph, back in the day when I was switching channels I was obsessed with her on SNL. Those are my big comedy women.

Your look is definitely Latina but you can also pull other ethnicities. Has that been an advantage?

People definitely can see I'm Latin right away but I get a lot of Armenian. Oh yes I'm going to be doing Kim Kardashian too. With my commercial agent I think they've been pinning me more for ethnically ambiguous because I can go for Middle Eastern roles. The truth of the matter is if I didn't speak Spanish and was bilingual, I probably would have never booked that Direx commercial and it probably would have taken me longer to break into this industry. That’s a realization I had recently because I was such a hater. I did the ABC diversity showcase and the CBS diversity showcase and those are showcases that try to find actors of different color, gender, sexuality and try to introduce them to the industry. I hated I was a part of it because I was like, “Why can’t I get something just because I'm good? Why does it have to be because I'm brown?” I struggled with that so much. The last CBS showcase I did, once I got the audition for MADtv and I was like, “Holy shit if it wasn't for these diversity programs, I wouldn't have gotten this.” I feel very lucky, fortunate and proud to be first generation bilingual American because I wouldn't be here without it. There’s a generation that I think their parents told them you don't need to learn Spanish, you're American, you were born here. But I was fortunate enough that my parents forced me to only speak Spanish at home and that ended up being my first acting gig.

Check this out on latina.com