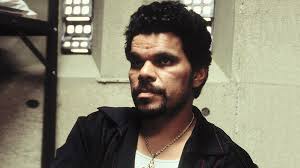 Luis Guzmán doesn’t need an introduction around these parts. Hollywood’s go-to character actor has been doing his thing for going on 40 years, and has almost single-handedly flipped the script on Latino representation in Hollywood along the way. And somehow he’s managed to do it all while remaining exceptionally humble and true to his Lower East Side Boricua roots. But don’t think it’s all been made in the shade for the legendary actor.

After first following his passion as a social worker, Guzmán kicked off his acting career in the late 1970s with your stereotypical Gang Member #2-type roles. But as a testament to his intelligence and tenacity, Guzmán deftly parlayed his rising star into an enviable filmography that includes roles in masterpieces of Hollywood auteur cinema (see: Traffic, Magnolia), alongside diverse roles as chefs, cops, dads, and E.R. nurses. And now, at 59 years old, Guzmán can celebrate two new career firsts: a role on the main cast of a network drama (Code Black), and a turn on one of Netflix’s groundbreaking digital series (Narcos).

So even though the man’s easily got a few decades of work left in him, it seems appropriate that the Lifetime Achievement awards start rolling in about now. And the first organization to give Mr. Guzmán the honor has been the National Association of Latino Independent Producers (NALIP), who recently bestowed him with a Latino Lens Legacy Award in recognition of his unparalleled career trajectory. 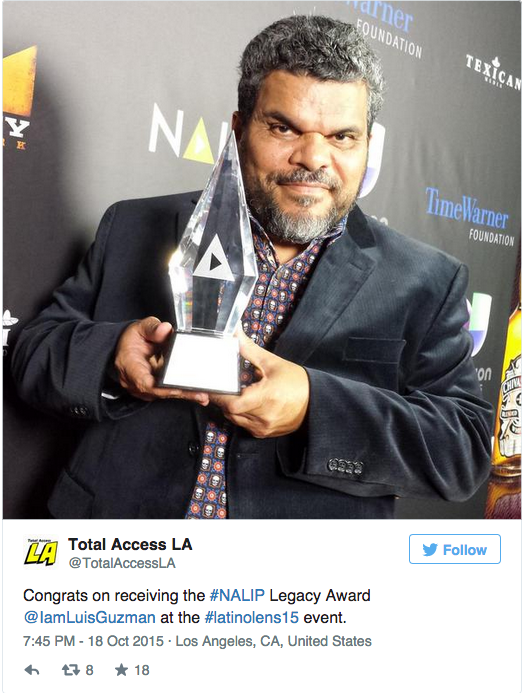 And guess what? To mark the occasion, we took the chance to chat with him about his favorite roles, a very special necklace, and the magic that’s taken his career to such great heights. So take five minutes and prepare to be inspired, mi gente, because Luis Guzmán’s just as real, thoughtful, and generous as you would hope him to be.

“I love what I do, but more than anything I’m really passionate about being able to pass that on to other people.”

I still consider myself pretty much the same person today that I was when I started out. I love what I do, but more than anything, I just really love the idea of being able to inspire other people who are up and coming. Because I know when I started out, I was inspired by people like Raúl Julia, ’cause I looked up to him and the things that he was doing. That was for me a great inspiration. Also, coming from the Lower East Side of New York City. I grew up when the Lower East Side was a very tough neighborhood to grow up in, but it also nourished me with a lot, as far as being a community activist and someone who is all about the community. The acting thing for me is great – I love what I do, I love the people that I work with. I continue to grow, but more than anything I’m really passionate about being able to pass that on to other people, especially young people.

On Taking It One Role At A Time

Early on…I understood the importance of building my foundation, and when you build a foundation you do it piece by piece, in my case it was role to role. I didn’t have a crystal ball that was going to say to me, “You know what, you’re going to make it.” No, my whole thing was that I wanted to grow, I wanted to learn, I was all about observing everything that went on. I asked a lot of questions. I used my life as a reference for a lot of my characters. I understood certain things, and pretty much that’s how I incorporated my roles into my life and vice versa. On Challenges For Latino Creators

Nowadays a lot has changed. I feel that we are in more prominent roles. Not only as actors, but as directors and producers and writers, and makeup and hair and electricians and carpenters, and set designers and wardrobe. Though I think there’s always room for progress. And the question is always asked, “Do you think that Hollywood is giving Latinos a fair shake?” And I don’t think that question today applies anymore. We really do have the power as Latinos to improve the quality of stuff that’s out there, because we can create some of that quality. But I also feel, and this is really key to me, that we have to really improve the quality of our own products, of what we put out there when it comes to entertainment. And I believe we’re making progress in that direction.

There was a time when we [Latinos] really didn’t have a say [in the roles we took]. That’s what you took to put food on the table. But I knew it wasn’t going to be like that forever, because everything keeps evolving. And when things evolve it’s like, “You know what, I don’t have to play that anymore, I can play the dad, I can play the doctor, I can play the President.” In life we’re always going to have stuff that’s stereotypical. That’s unavoidable. I would have a problem if that was all that was being done. But you’re always going to have that element. On The Hardest Show He’s Ever Done

“Doing Code Black is a wonderful opportunity because I’m doing something that I love and making a difference in people’s lives.”

[Code Black] is the hardest show I’ve ever done in my whole career, and it has nothing to do with dialogue. It has to do with the fact that emotionally you’re invested in it. You have to learn medical procedures, you need to understand medical lingo. You need to understand how rapidly things happen in a trauma center. I actually visited the trauma center, and when you see what goes on it’s an incredible controlled kind of chaos. For me doing Code Black is a wonderful opportunity because I’m doing something that I love, and that is working with people and saving people and making a difference in people’s lives, and this nurse that I portray is doing that. And it’s a good feeling. It really really is.

On The Absolute Realness of How to Make It In America

For me it was one of the best roles I’ve done, because it was showing to me what dreams are made of. And it showed that here’s a guy who’s been in and out of jail, he’s one of those jodedores from the neighborhood and he’s going to try his best to make it. And I love that. I love that about my role, I love that about some of the other roles, and people trying to get on with their lives and make something of themselves. And you move up two steps and you fall back ten, you move up three, you fall back four… And it’s this constant back-and-forth struggle of trying to make it, and every time something great happens then something knuckleheaded happens. And that’s part of the reality. On Why He’s Always Wearing A Necklace

“I’m not there to be the biggest, the baddest, the outcast. I’m there to do the work.”

It’s my own personal necklace. It’s a part of me. It was something that someone gave to me 30 years ago and I’ve never taken it off. And if I do have to take it off, it’s always in my hands. It has nothing to do with wardrobe. That’s part of the Luis Guzmán brand.

On That Luis Guzmán Magic

Of course, there’s certain advantages that I have, you know growing up on the Lower East Side. It’s been the circle of people I grew up around, the influences that I have. To me that’s the magic. How I’m able to incorporate my own personal life and my own personal emotions into what I do. And I guess also that’s really kept me grounded… I’m really proud of who I am and where I come from and the people I grew up with, and the influence my Mom and Dad have had on me, and the influence of some of my older friends especially. That to me is all part of the magic. 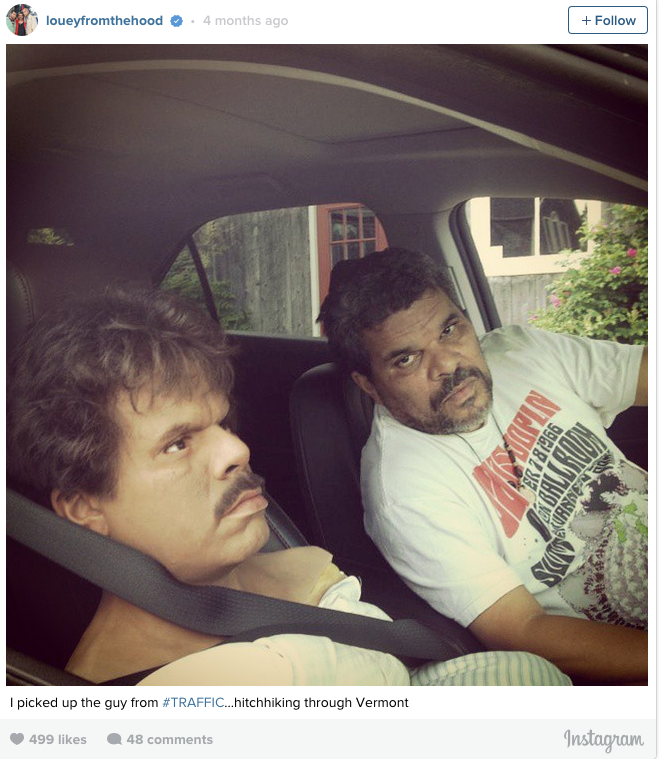 Check this out at Remezcla.com