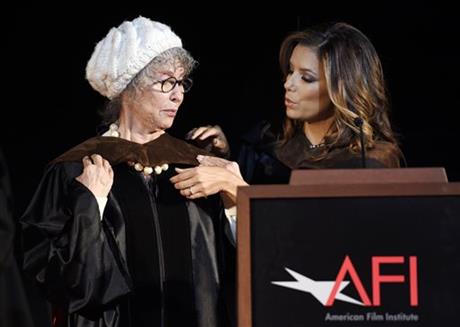 LOS ANGELES (AP) — Eva Longoria has some advice for the new graduates of the American Film Institute: Use Rita Moreno as a guiding light to use myriad points of view.

Longoria presented the legendary stage and screen actress with an honorary doctorate of fine arts Wednesday in Los Angeles.

"As you go on to write and direct and produce ... rise above caricature, as she does. Create complete and complicated characters, as she does," Longoria told the audience of students and their family members — including Denzel Washington, whose son was graduating. She stressed how important it was to her as a young Latina girl to see Moreno lighting up the big screen in "West Side Story."

Moreno took the podium with a little spin and a kick after the "America" song and dance scene from "West Side Story" played on the big screen behind her at the TCL Chinese Theatre.

"All I can figure is that the powers that be are giving me credit for 70 years of not giving up," Moreno said. "The trick is just to live for 84 years and wear them the hell down."

Moreno recalled her discouraging early days in Hollywood where she was called on by studios to play any and every ethnicity — and how she'd use the same accent for all. She called them "dusky maiden roles," and usually they would involve her character ending up devastated after being rebuffed by white men.

"I had to deliver lines to my white lover like, 'why you love Ula no more?'" Moreno said, referring to the 1955 film "Seven Cities of Gold."

And yet, Moreno said, that those directors and studios "could not succeed in drowning this Puerto Rican." She of course would rise above that early stereotyping, winning Emmys, a Grammy, Tony and Oscar.

Quentin Tarantino was also on hand to pick up an honorary doctorate, laughing about the fact that he never even graduated high school.

"I actually did try to enroll in AFI in the early 80s," he said. "I actually tried to get a job at Grauman's Chinese Theatre and that didn't work out either."

He urged the graduating students to use their work to contribute to the conversation "on race ... on culture ... on America ... on the world ... on politics."

Check this out on ap.org