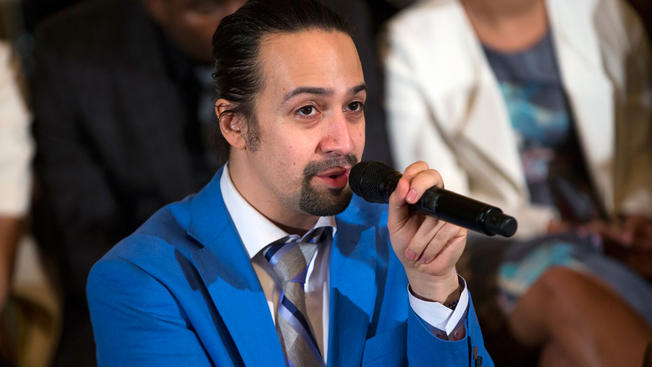 Composer and playwright Lin-Manuel Miranda has accepted one of the largest prizes given for the stage by celebrating immigrants, saying that his creation of the Broadway smash "Hamilton" was sparked by learning about Alexander Hamilton's overseas roots.

Miranda, who on Thursday was awarded The Edward M. Kennedy Prize for Drama Inspired by American History, told of reading a biography of the first U.S. treasury secretary by Ron Chernow and learning that he was born and raised in what was then the West Indies.

"I grew up in an immigrant neighborhood. We just knew the rule was you're going to have to work twice as hard," Miranda, whose family came from Puerto Rico to New York City, said in his acceptance speech.

"When I found that out about Hamilton, I said, 'I know this guy. I know this guy and he's not going to let me go.' And he didn't let me go for seven years.

The prize, bestowed by Columbia University, was created to honor a new play or musical that explores the United States' past and deals with "great issues of our day." It comes with $100,000. This is the fourth year the prize has been given and the first time a musical has won.

"We are all in awe," Edward M. Kennedy Jr., the son of the late senator, told Miranda. "You've made history come alive. And 'Hamilton' makes us all want to learn more about history.

Before the ceremony, Miranda got a chance to see some of Columbia's Hamilton memorabilia, including his wedding band, enrollment papers and his final letter to his wife, Eliza, written on the morning of his fateful duel. He was also serenaded by the Young People's Chorus of New York City, performing songs from "West Side Story," a musical that inspired him to songwriting.

The prize was established by Kennedy's sister, Ambassador Jean Kennedy Smith, in consultation with playwright Tony Kushner. The year's recipient is announced every Feb. 22, the anniversary of the late senator's birth.

"Hamilton" explores Hamilton's life and is told by a young African-American, Asian and Latino cast and with music that blends musical theater, rap and pop.

The show has won a Grammy Award and awards from the Outer Critics Circle, the New York Drama Critics' Circle and the Drama Desk, and it is a likely candidate for Tony Awards this summer. The show's album became the highest-debuting cast recording on the Billboard Top 200 in over 50 years.

Miranda said he hoped his work would inspire more: "History is so subjective. The teller of it determines it," said Miranda. "I'm excited to see what stories come out of this and what comes next."

Check this out on nbcnewyork.com