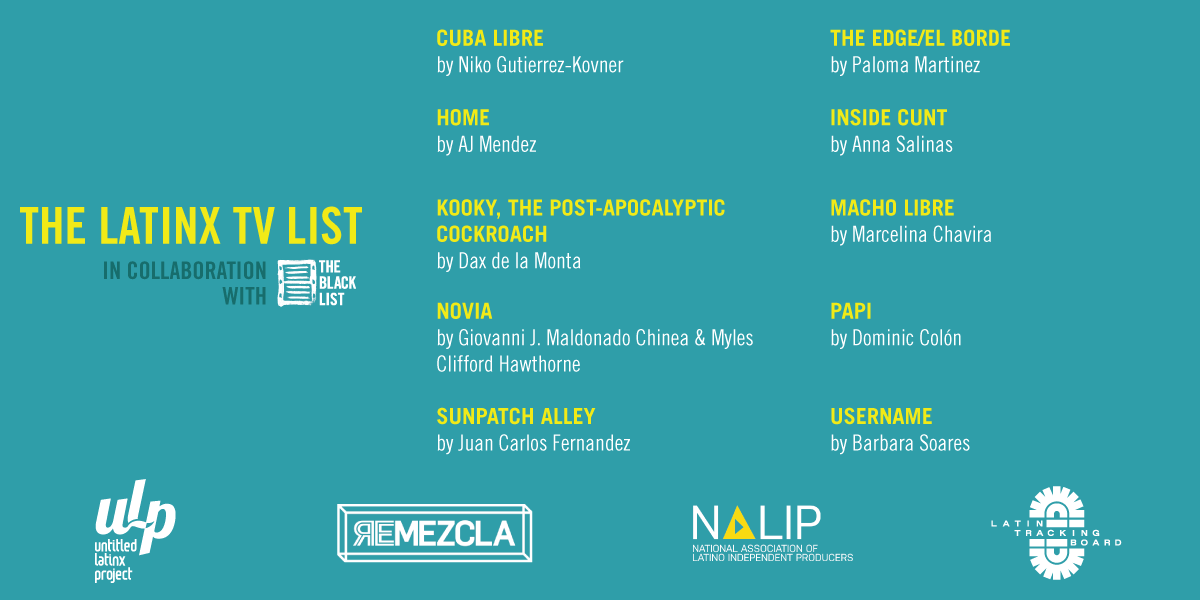 In partnership with The Latin Tracking Board, Remezcla, The Untitled Latinx Project, and The Black List, NALIP is proud to announce with our partners the ten original television pilots selected for the inaugural Latinx TV List.

The selected writers and projects were announced during our Latinx TV List session with NALIP executive director Ben Lopez joining Franklin Leonard and Kate Hagen of The Black List and television creators Gloria Calderon-Kellett (ONE DAY AT A TIME) and Tanya Saracho (VIDA) of the Untitled Latinx Project during the NALIP Media Summit 2020 Virtual.

As an additional benefit of placement on the Latinx TV List, selected writers will have their pilots shared with Hulu. The premium streamer plans to offer a WGA minimum blind pilot script deal to two of the writers or writing teams selected for the inaugural Latinx TV List, in addition to meeting with all ten writers selected.

“NALIP is thrilled to have partnered once again with the Black List for the Latinx TV List. We have always aimed to be a platform for underrepresented communities and the winners now have a chance to tell their incredible stories. We also applaud Hulu in their commitment to the Latinx community. In collaboration with our partners, The Black List, Untitled Latinx Project, Latin Tracking Board, and Remezcla, we would like to sincerely congratulate this year’s Latinx TV List!"- Ben Lopez, Executive Director, NALIP

Congratulations to all the selected writers! check out the article over at Deadline by Dino-Ray Ramos HERE!

CUBA LIBRE tells the story of Fidel Castro’s revolution through the eyes of a couple who become crucial to its success, risking their marriage, their livelihoods, and their lives for a movement that ultimately loses sight of the people in one man’s blind pursuit of power.

THE EDGE/EL BORDE by Paloma Martinez

After a destructive storm triggers the largest sewage spill in the history of North America at the US/Mexico border, a local teenage girl must prove there is an unnerving new life form evolving and threatening human existence.

A dark comedy about a young Latina who struggles to re-enter the world after surviving a suicide attempt, but uses her comatose Mormon roommate's seemingly perfect identity to start fresh.

INSIDE CUNT by Anna Salinas

A brash 28-year-old Nuyorican is pulled into a dangerous world of international espionage when her vagina suddenly starts intercepting Russian spy signals.

Miggy, a perpetually upbeat and slightly naive loser, must survive a road trip across a nuclear wasteland with the help of his misfit coworker, old school abuelo, and a wisecracking chatterbox who happens to be a giant, mutated cockroach.

After his fathers pass away, a mature and woke AF 11 year-old boy is forced to move in with his estranged, old school, super macho, ex-luchador grandfather above the aging man's eccentric wrestling academy.

In 1929, a young girl escapes her abusive life in Mexico City for Los Angeles and the promise of stardom in a Spanish-language version of the Universal classic, DRACULA -- only to find that the monsters of one's past don't simply vanish, but follow. Based on the true story of Lupita Tovar.

PAPI, is a half hour dramedy that explores the life of Kilo Rodriguez, a closeted bisexual barber from the Bronx, who on his 21st birthday, unexpectedly gets custody of his foul-mouthed six-year old daughter. As Kilo tries to navigate becoming an adult, while avoiding the temptations of the streets, and understanding his fluid sexuality, he embarks on a transformative journey discovering what it takes to be a good "Papi.”

The times, they are a-changin' in this dark, comedic drama set in 1970's New York. GRACIE FUENTES, the creative director of a popular kids' show, finds her noble pursuits of inclusion continually steamrolled by the show's sexist and alcoholic star, LOUIE BARNETT. But when the station is taken over by the crime family Louie is indebted to, Gracie seizes the opportunity to take matters into her own hands. "Sesame's mean streets."

After joining an A.I. talent agency where she impersonates a CGI Instagram celebrity, a hacker finds herself at the center of a high-stakes conspiracy when that same celebrity begins enlisting her followers to commit suicide.