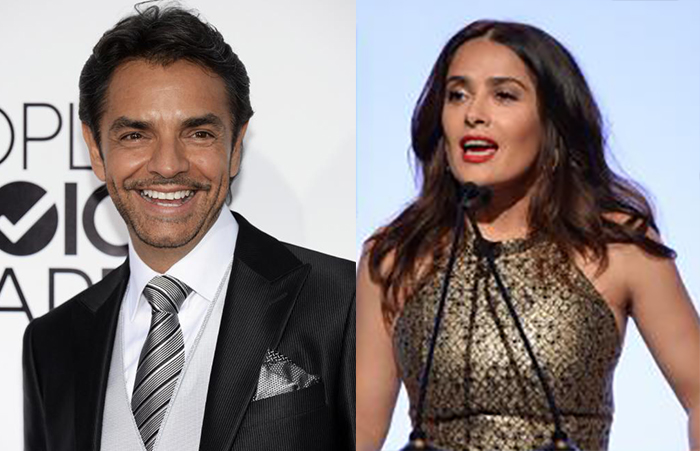 CinemaCon, the world’s largest gathering for the worldwide motion picture theater industry, will honor Eugenio Derbez with the CinemaCon International Achievement in Comedy Award, Salma Hayek with the CinemaCon Vanguard Award, and Isabela Moner with the Rising Star of the Year Award. All three Latinx stars will receive their awards on March 30th in Las Vegas.

Derbez is becoming a big name in Hollywood. He co-wrote, directed and starred in the smash hit “Instructions Not Included,” which is the most successful Spanish-language film ever in the US, according to HuffingtonPost. Derbez and his production company, 3Pas Studios, then struck a first-look deal with Pantelion and Lionsgate.

“Already one of the most influential creative forces in Latin America and with the US Spanish-speaking audience, Derbez is sure to gain international attention with his upcoming roles in such films as ‘How To Be A Latin Lover,’ ‘The Nutcracker And The Four Realms’ and ‘Overboard,’” said CinemaCon managing director Mitch Neuhauser in a press release.

Hayek, who will also star in “How To Be A Latin Lover,” has come a long way since her breakthrough role in “Desperado.” An Academy Award nominee and an avid advocate for the Latinx community, Hayek has starred in dozens of films, ranging amongst a variety of genres. “The Hitman’s Bodyguard,” in which Hayek plays a hitman’s notorious wife, will be screened at CinemaCon.

“A commanding presence onscreen and off Hayek has proven herself to be one of the most prolific actresses of our time,” Neuhauser said. “We could not be more honored to present Hayek with this year’s ‘CinemaCon Vanguard Award.’”

Moner is an up-and-coming Peruvian actress. She started her acting career on Broadway when she sang in Spanish alongside Ricky Martin in the production of “Evita.” Moner is best known for her role in Nickelodeon’s “100 Things To Do Before High School” series, and soon audiences will see her in the upcoming “Transformers: The Last Knight” film.

Congratulations to these Latinx stars on their well-deserved awards! We are excited to see their future projects as they continue to represent for the Latinx community.