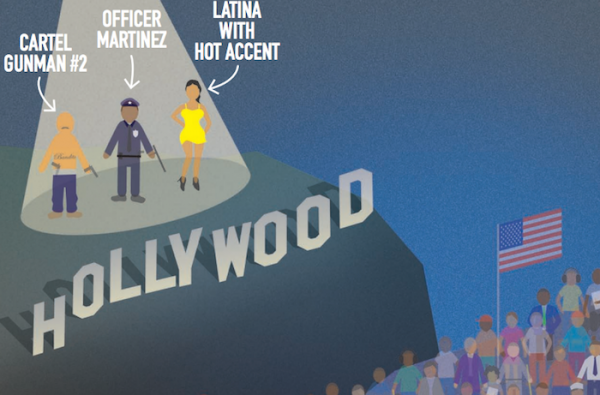 Although the Latino population in the United States is growing, a thorough review of the top movies, TV programming and news reveals that there is an abysmally low number of talent and executives in the entertainment and media industries relative to population. The new study, The Latino Media Gap: The State of Latinos in U.S. Media,  was released in June 2014 by Columbia University’s Center for the Study of Ethnicity and Race. The study was created in collaboration with the National Hispanic Foundation for the Arts (NHFA), the National Association of Latino Independent Producers (NALIP) and the National Latino Arts, Education and Media Institute (NLAEMI).

One of the most comprehensive studies of this issue to date, The Latino Media Gap also found a narrower range of Latino roles and fewer Latino lead actors today, as compared to 70 years ago, and persistently low levels of Latino participation in mainstream English-language media.

“The success of a few Latino stars has created a widespread perception that media diversity in the U.S. is significantly improving,” said Frances Negrón-Muntaner, director of Columbia’s Center for the Study of Ethnicity and Race and the study’s lead researcher. “But our findings indicate that, in some ways, it is getting worse.”

Although the Latino population in the U.S. grew more than 43 percent between 2000 and 2013, to 17 percent of the total U.S. population, participation behind or in front of the camera stayed stagnant or grew only slightly, often proportionally declining. Even when Latinos are visible, they tend to be portrayed through centuries-old stereotypes, either hypersexualized, as comic relief, and/or cheap labor.

“Latinos are constantly portrayed with a broad brush—and the picture displayed is extremely limited,” said actor Esai Morales, NHFA co-founder and co-star on CBS's Criminal Minds. “I call it the four H’s of Hollywood—Latinos are either cast as overly hormonal, overly hysterical, overly hostile or overly humble. Far too often, we’re supposed to be the spice on the side, rather than a central figure, a hero or leader. And that needs to change.”

“The scale of Latino media exclusion is stunning,” added Negrón-Muntaner. “Just imagine that any references to the entire state of California (38 million people) and Illinois (12.8 million), or the combined states of New York, Florida and Pennsylvania (49.8 million), were eliminated from our media culture. That would be deeply troubling, and so is this.”

Findings from the report include:

Columbia University’s Center for the Study of Ethnicity and Race

Founded in 1999, the Center for the Study of Ethnicity and Race (CSER) at Columbia University is a vibrant teaching, research, and public engagement space. The Center's mission is to support and promote the most innovative thinking about race, ethnicity, indigeneity, and other categories of difference to better understand their role and impact in modern societies. CSER is unique in its attention to the comparative study of racial and ethnic categories in the production of social identities, power relations, and forms of knowledge in a multiplicity of contexts, including the arts, social sciences, natural sciences, and humanities. To promote its mission, the Center organizes conferences, seminars, exhibits, film screenings, and lectures that bring together faculty, as well as undergraduate and graduate students, with diverse interests and backgrounds. CSER partners with departments, centers, and institutes at Columbia and works with colleagues and organizations on and off campus to facilitate an exchange of knowledge. More information at www.columbia.edu/cu/cser

Frances Negrón-Muntaner is a filmmaker, writer and scholar, as well as the director of Columbia University’s Center for the Study of Ethnicity and Race. Among her books are Boricua Pop: Puerto Ricansand the Latinization of American Culture (CHOICE Award, 2004) and Schomburg (forthcoming). Her films include AIDS in the Barrio, Brincando el charco: Portrait of a Puerto Rican and the upcoming television show, War in Guam. Negrón-Muntaner is also a founding board member and past chair of NALIP, National Association of Latino Independent Producers. In 2008, the United Nations’ Rapid Response Media Mechanism recognized her as a global expert in the areas of mass media and Latino/a American Studies. In 2012, she received the Lenfest Award, one of Columbia University most prestigious awards. More information at www.francesnegronmuntaner.net.

The Media and Idea Lab

The Media and Idea Lab is an integral program of Columbia University’s Center of the Study of Ethnicity and Race. The Lab’s main goal is to enable students, teachers, and visitors to jointly develop curatorial, video, web, and mapping media projects that enhance understanding of crucial questions, create knowledge communities, and found discussion spaces. At its core, the Lab offers courses, project opportunities and working groups that all promote media as modes of inquiry and community-building. More information [email protected]