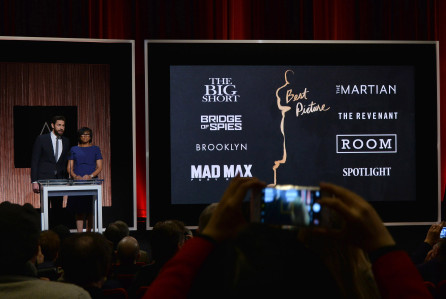 Academy president Cheryl Boone Isaacs was diplomatic but clearly disappointed when I spoke to her at this morning’s Oscar nominations about the omission of African American-driven films like Straight Outta Compton, Concussion and Beasts Of No Nation. “Of course I am disappointed, but this is not to take away the greatness (of the films nominated). This has been a great year in film, it really has across the board. You are never going to know what is going to appear on the sheet of paper until you see it,” she told me, while acknowledging the Academy’s very public efforts at diversity are moving too slowly. “We have got to speed it up.”

Already the #OscarsSoWhite hashtag from last year’s glaring lack of diversity in the acting nominations is back in action, and you could see at this morning’s announcement for the 88th Annual AcademyAwards that officials were bracing for another tsunami of bad press regarding the lack of diversity on the list, especially regarding black artists. And despite Ang Lee’s and Guillermo del Toro’s presence in reading the nominations today, there was little to cheer about in the Asian and Latino communities also (with the BIG exception of last year’s big Oscar winner Alejandro Gonzalez Iñárritu’s presence with The Revenant). 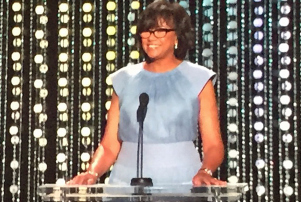 This is despite big efforts by all concerned to deliver those missing nominations. Netflix, for instance, put a huge campaign behind Idris Elba for Beasts, and Will Smith gave arguably the finest performance of his career in Concussion. Recent National Society Of Film Critics Best Actor winner Michael B. Jordan, star of Creed, was even passed over, even as his co-star Sylvester Stallone was nominated in the Supporting Actor race. Creed‘s young director Ryan Coogler was also overlooked in the directing contest.

The cast of Compton also failed to break through. In fact Compton — produced, directed and starring a strong African American team — received only one nomination, Original Screenplay for Jonathan Herman and Andrea Berloff, S. Leigh Savidge & Alan Wenkus — who are all white. Universal, which distributed the film, also did a very costly print and television campaign for the film aimed at getting into the Best Picture race. It didn’t happen.

Is it fair to blame the Academy for this? Voters have certainly handed Oscars to many black performers in the past and just two years ago gave the Best Picture prize to 12 Years A Slave and Supporting Actress to Lupita Nyong’o. It wasn’t long ago when Denzel Washington and Halle Berry won the top two acting prizes in the same night. And the organization has really tried to shake things up in the membership, with many minorities, not just African Americans, gaining entrance to the exclusive club in recent years — particularly since Boone Isaacs became president and Dawn Hudson got the CEO job.

Boone Isaacs today pointed out the aforementioned presence among Latinos in today’s nominations with Gonzalez Iñárritu’s Revenant leading all movies with 12 nominations, as well as the high number of women producers and writers on the list this year. But there is no question the headlines hurt. And can the Academy really do anything about a democratic vote in which more than 6,000 members cast a private ballot?

Much of the lack of nominees of color often is said to lay more at the hands of the industry and its employment practices and green lights for movies, rather than the Academy, which really is at the end of the filmmaking process and looking to honor quality wherever they may find it. I have to say I was impressed earlier in the fall when I participated in an all-day event at the Academy designed to encourage largely minority filmmakers in their efforts to break into the business. So this year then is particularly heartbreaking in this quest because the quality was clearly there on screen. This morning someone was overheard saying, “Perhaps this year’s Oscar shows theme line ‘We all dream in gold’ should be changed to ‘We all dream in white’. ” Ouch. And certainly not really fair.

Academy’s Board Of Governors in November gave quintessential black director Spike Lee an Honorary Oscar; Boone Isaacs is the first black president of the group and only the third woman to lead it; Chris Rock is back for his second stint hosting the Oscars this year; and one of its producers (with David Hill) is Reginald Hudlin, who, while also expressing enthusiasm for many of the nominees, told me this morning he was also disappointed.

“Of course. I thought there was anextraordinary amount of Oscar-worthy work by black artists and they all got overlooked,” he said. “That’s a lot, so it’s very disappointing. But that doesn’t change the fact that those movies are there, those movies are great, audiences love them and they were some of the biggest boxoffice of the year. So America’s clear, the world is clear as they are celebrating them. I hope they are not being punished for their success.”

Of course they are also in good company today with directing snubs for Ridley Scott and Steven Spielberg along with the likes of Johnny Depp, Aaron Sorkin and on and on. One person close to process recently predicted to me, “a lot of people will be disappointed on nomination morning.” He was right, but there always are those who get overlooked. You can’t help it.

Even the year’s biggest movie, Star Wars: The Force Awakens, was blown off the Best Picture list and received just a handful of technical nominations despite Academy efforts to get more popular movies on the list, while the second biggest movie of the year, Jurassic World, was blanked completely. There’s only so much you can do with a slow-moving organization that hands out memberships for life. Still the issue of diversity is one that isn’t going away this year, despite the Academy’s efforts to effect significant change and make the list of nominees look more like the world around us.