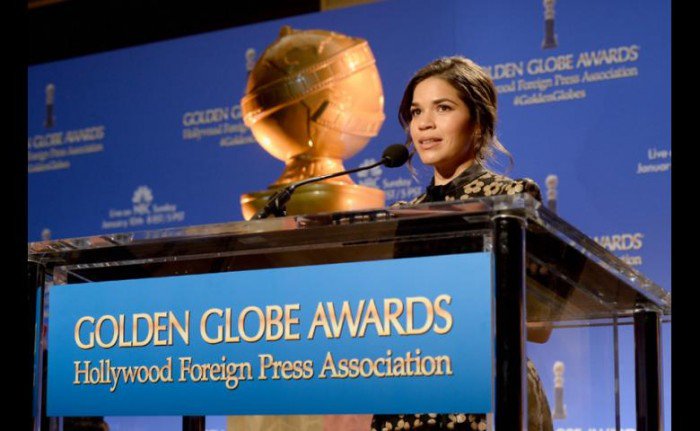 It’s the most wonderful time of the year! No, not Christmas. It’s time to get our award season on. Today, actors, actresses, and filmmakers are waking up to either champagne and mimosas, or sadness, for today, the 73rd Golden Globe nominations were revealed.

The nominations were announced by America Ferrera, Chloë Grace Moretz, Angela Bassett, and Dennis Quaid. That’s right – three women, two of whom are minorities, and one sole white man. Here’s hoping the nominations are just as colorful. Spoiler alert: they aren’t.

The Hollywood Foreign Press Association (the organization that doles out the awards) already started off on the wrong foot – the person in charge of the official Golden Globes Twitter account can’t even tell Latinos apart. As America Ferrera walked on stage, a pair of tweets went out announcing that Gina Rodriguez would be part of the nomination announcement. Their families are not even from the same country, you guys. And they don’t look anything alike. Get your shit together.

This year, Alejandro González Iñárritu repped us with Birdman, and perfect human specimen Gina Rodriguez obliterated the Grinch inside us with her acceptance speech. Who will top #ICanAndIWill this year?

Read below for a list of the Latino peeps who will be partying it up, thanks to The Hollywood Foreign Press and their hard work this year.