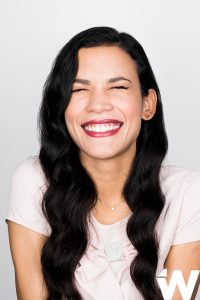 Actress Danay Garcia has traveled a long road to be where she is now. Originally from Havana, Cuba, Garcia was born during the Communist regime that severely toiled the Caribbean island. In 2003 she was granted asylum by the United States and was able to migrate from her homeland with her son. Having a background in the arts, Danay pursued her dream of becoming an actress in Hollywood. However, when she first arrived in the US, Danay was not fluent in English.

Instead of letting this barrier stop her dreams, she used it as fuel to work twice as hard as those around her. Danay used her background in the arts to her advantage and was able to navigate the auditioning process, although not always with success. She stated that for her, failure is something essential if one wants to win, “you have to fail so many times to win one little thing. But it’s all worth it.”

In the process of making US her home, Danay started learning English by studying with teachers and dialect coaches while simultaneously beginning ballet studies at the Debby Allen Dance Academy.  She first began her acting career by booking commercials and was able to land her first US feature film role playing opposite Marisa Tomei in the 2006 psychological thriller Danika. Danay then made her television debut on both top rated shows, CSI:NY and CSI:Miami. Her breakout role came as a series regular in the Golden-Globe winning Fox television series, Prison Break as Sofia Lugo which went on to span five seasons to critically acclaimed success.

Currently, Danay portrays the role of Luciana Galvez, in AMC’s Fear the Walking Dead which just premiered up its fourth season. Her character is an immigrant from Mexico and a former member of the La Colonia community from Tijuana that must navigate a new environment, one without borders and do so while facing life threatening situations and the relentless attack of zombies. Danay feels that her character Luciana is quite relatable to her own life. Although Luciana is living in the end of the world, to an extent, her relationship with the zombies is uniquely tied to the relationship Mexican culture has in relation to the dead. “The dead are our neighbors and friends. We recognize then and of course it’s difficult but it’s the only way we survive. We protect each other whether we’re dead or alive. To me, that’s an act of love,” Danay reiterates.

Even as her character becomes the fan favorite, Danay doesn’t want her character to be seen as just a badass woman. Luciana is a character with many different layers. She is independent, in charge, vulnerable and able to feel and be delicate but can still take over the world. Danay wants women of all ages to identify with her character and feel empowered. Especially for Latina women who come from many other countries to the US with dreams of their own. “If they can root for her, they are somehow rooting for themselves.”

Although Danay has gathered a plethora of Walking Dead fans and is now under her own spotlight, she is constantly working on elevating her craft. As an actor she knows that waiting for jobs, for the right producers and the right distributors is half of the challenge. Living in this kind of reality led to her open an exciting and creative layer of her own. Danay wants to create her own universe and empower her own characters. “You cannot sit down and wait,” Danay reiterates. “You do not get paid to wait.” As a creator Danay knows that creating characters that are complex and a universe of inclusion is a dream that anybody can be apart of. Her own special project, La Cura was a result of this inspiration. In between shooting for her AMC show, Danay headed to Mexico and put together a group of people to create something truly special. She encouraged everyone to stop waiting for something to happen and instead get up and do something for yourself.

As Danay’s career as an actress and as a content creator continues to grow, she places high value on organizations like NALIP to spread important stories that can move people from all around the world. It is important to her that organizations care about what creators need in order for them to succeed and build a legacy where others can learn from each other, “that’s the only way different people can connect and become unstoppable.”

Catch Fear the Walking Dead every Sunday on AMC.