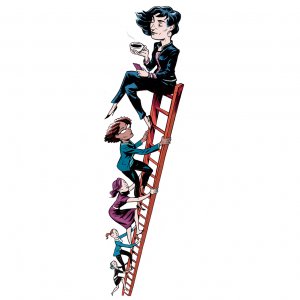 "For so long, women have believed there's only one seat at the table, and I'll be damned if I have to give up mine." So says a TV exec as she writes anonymously for The Hollywood Reporter about the limitations of the one-on-one relationship.

This story first appeared in the 2015 Women in Entertainment issue of The Hollywood Reporter magazine.

I am one of the lucky ones. I actually had a mentor. I arrived in Hollywood at 22 and found her right away: a woman with a fancy TV job and a loving family and cool friends.

I declared her my mentor, and she was game to play that role for me. For several years, I shadowed her, emulated her, vented to her and accepted (gratefully) all of the tools, rules and access that she gave me. But at a certain point, my own career started to take shape, and as I watched her continue to carve her path — which was inspiring and maddening and confusing and wildly educational — I began to realize that her path was not mine. I needed to strike out on my own. Find my own path, my own identity. For better or worse, I outgrew her.

Now I am in a position where I can mentor others, and I feel compelled to do so. After all, there's no better way to pay it back than to pay it forward. But along with this compulsion to "pass the torch" comes a hesitation, as I've seen the limitations of a one-on-one mentoring relationship. The motivation for engaging is often driven by a sense of obligation, or quid pro quo for loyalty and dedication. Agendas seep in, feelings get hurt. And it's not just that. I can't help but wonder whether this kind of exclusive pipeline prevents people from diverse backgrounds and perspectives from finding a match. In my experience, mentoring often occurs between like-minded people. I've certainly said, "I see myself in you!"

All of which raises the question: Isn't there a better way?

It's a question I've been thinking a lot about ever since I scored an invite to a cocktail party hosted by an influential female executive in another male-dominated industry. It was at her home, and more than 100 women — from top-level executives to their low-level assistants — turned out, as they do each time she hosts. It was hugely inspirational, in part because the tenor of the gathering wasn't negative or competitive or even hierarchal; instead, the evening was focused on openly sharing experiences to identify common struggles and discuss potential solutions.

It was the sort of group hug that I had never experi­enced here in Hollywood, where for so long women have believed that there's only one seat at the table and, well, I'll be damned if I have to give up mine. All of it left me wondering: Why put all of our efforts into finding that one woman when we could be developing an entire community? Each of us has the power to build our own network. And we should be building them … together.

So here's an invitation: It's not a weekly standing meeting. It's not 15 minutes in an office. Let's have a dinner party, no agenda. Reach out to your women — those above, below and next to you. I'll cook; you bring the wine. If your title is senior vp or above, we're coming to your house. In my opinion, that might be all we need to get everyone a seat at the table.