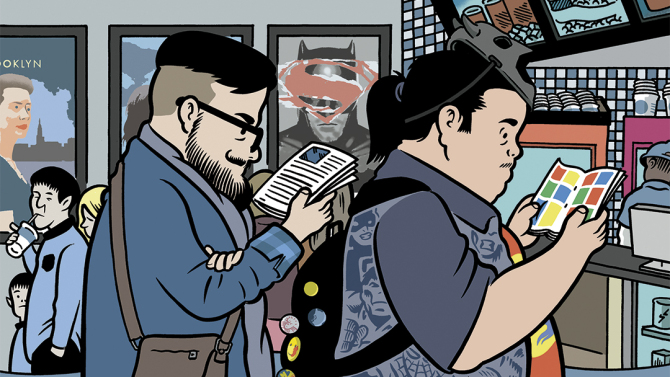 With Cinemacon beginning this week, there will be much talk of summer blockbusters. But don’t count out the smaller films.

Talk about mismatched opponents. In one corner you have box office monsters (“Batman v Superman,” “Deadpool,” the latest “Star Wars” entry) and in the other, acclaimed indies (“Room,” “Brooklyn,” “45 Years”) that, by comparison, barely make a dent in the charts. So will independent cinema survive in theaters when the world is becoming an increasingly blockbuster-centric experience?

“Absolutely, as the world doesn’t live by blockbusters alone — and it never has,” says Tom Bernard, co-president of Sony Pictures Classics. “There’s a big audience for intelligent cinema that isn’t going away.” He cites the “specialized marketing departments” run by AMC, Cinemark and Regal. “They’re the big blockbuster players, yet every week they make room for indies and intelligent cinema. The theater owners, who are the front line, know there’s an audience.”

Bernard also notes that older audiences have “a lot of disposable income, while the teenage audience doesn’t have $15 or $20 to drop every week on the latest blockbuster. So variety seems to be the spice of life, and the only way indie cinema won’t survive is if they stop making movies.”

“Indie releasing has never been easy, but we’re dedicated to it, and there’s definitely room for both,” he says, citing the chain’s current programming. “We’re screening ‘Batman v Superman’ like everyone else, but we’re also showing indie drama ‘Too Late,’ shot and projected on 35mm, and horror films ‘Hush’ and ‘The Witch,’ so we’re very easily able to find a balance between the two.”

League reports that such recent indies as “The Lady in the Van,” “Brooklyn,” “Room” and “Ex Machina” have “all done very well, and if an indie release can find the screens and partner with theaters on marketing and promotion, they also find the audiences. I’m still very bullish on the theater experience, and indie audiences will show up if you offer a great product. And no mater how many movies Netflix decides to buy, they’re not going to buy them all, and there’ll always be great, quirky content to enjoy at the cinema.”

Movio CEO Will Palmer reports that there are four key areas where independent films could “greatly benefit” from a focused strategy: “First, the filmmakers and exhibitors really need to target their market — and more specifically,” he notes. “And right now they’re losing the battle. Second, they need to focus release dating so it coincides with their audience’s attendance patterns. There are very avid indie films fans out there — just as avid as the blockbuster fanboys — but we’ve studied the data in detail, and it’s very evident that release frequency is also key. Too many a month, and it saturates the market. But too long a gap between releases and it’s just as bad.”

Palmer goes on to stress that indie audiences “are very different” from blockbuster audiences, “so exhibitors need to look at the best times to cater to these audiences, as they go at very different times. And our data shows that indie audiences take twice as long to go to see a new film as a blockbuster audience, as they tend to wait for reviews. So indies don’t need to be screened at premium times, but they do need to be screened for far longer runs.

“Finally, the indie filmmakers really need to understand their audience profile and look at all the data — and that data is far more important for the indie market to know than it is for the blockbusters, and it can be surprising.” As an example, he cites “the big audience overlap” between people who flocked to see “Philomena” and those who watched “Whiplash.” “You need to cater to that broad range of taste and think holistically.”

Looking to the future, Palmer says if the indie business follows these pointers, “they’ll be just fine.”

For acclaimed indie auteur Jeff Nichols (“Take Shelter,” “Mud”), whose latest film, “Midnight Special,” was just released by Warners, “Indie cinema will survive because they tell the sort of stories that audiences want to see in theaters,” he notes. “And whether you see films in a theater or at home, I think you can have the same emotional connection if the story elements are there. But it’s the job of the distributors to make sure they’re viewed in such a way that they represent the filmmaker’s vision, and that isn’t the case with the harsh HD look of TV and tiny screens on phones and so on. I still believe in that shared theater experience.”