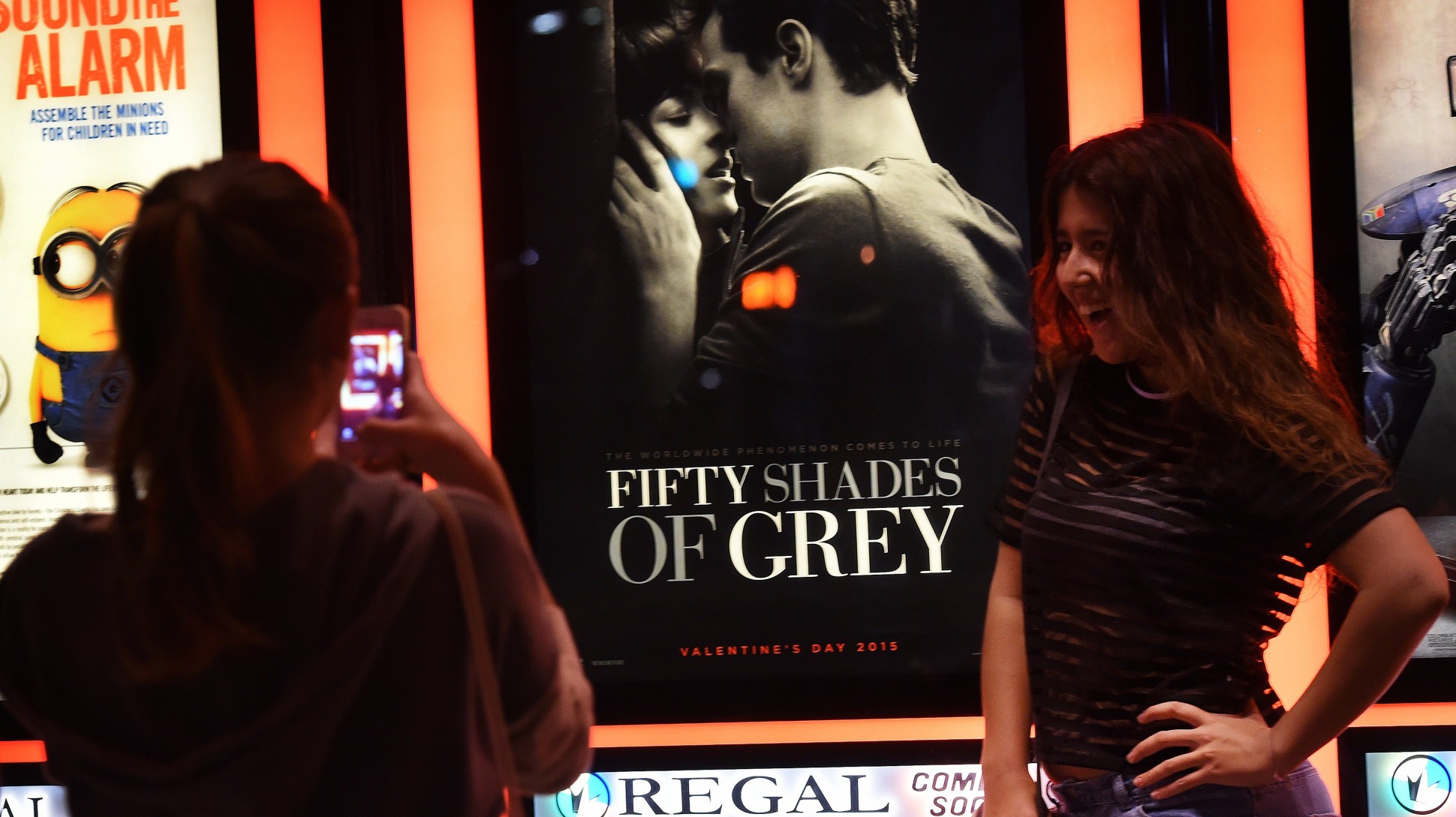 If you are one of the estimated 56% of movie-going Twitter users who takes to the platform to rant about an actor or rave about a film, watch out – the studios are listening.

In the last few years, a handful of companies have started tuning into social media conversations to gather information on how people perceive movies and their stars. In a multi-billion dollar industry, where production budgets can top $200 million per film – and marketing budgets may soar just as high – insight into what people think about a leading man or blockbuster trailer is lucrative knowledge that, if harnessed, can flip a film from red to black.

Fizziology is one such social media research firm which provides studios with reports sourced from online sentiments. “We have over 2 billion social media feeds related to media and entertainment in our data warehouse,” explains Ben Carlson , cofounder of the Indianapolis, IN-based company which has built software that plugs into Twitter, Facebook, Tumblr, Instagram and blogs to follow conversations about movies.

Gifs of an actress posted to Tumblr, tweets about a Fast & Furious sequel – all of this data is pulled and filtered by one of Fizziology’s 12 full-time employees or various freelancers, providing a confidence level in their research, says Carlson. Then, that data is packaged into reports provided to studios for a fee (Fizziology would not disclose exact prices). 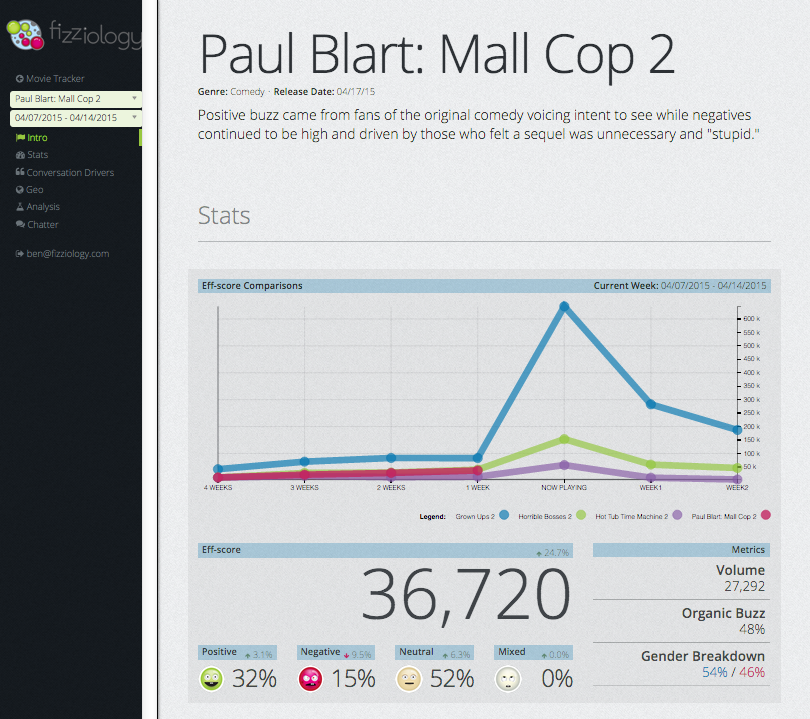 “We’re going to be working on 70% of the major releases coming out in 2015,” Carlson said, before noting that is a 20% increase over their 2014 reach. “We don’t work with every studio and every movie, but we work with most studios and most of their movies.”

Started by Carlson and fellow ex-advertising executive Jen Handley, the duo began making content reaction reports to send studios after trailers were released. Now Hollywood can order casting reports to understand how the star of an actor is waxing or waning, helping the companies decide whether that makes the actor a fit for a future role based on the gender and age of his fans. Casting someone who has a young fan base in an R-rated movie, for example, seems like an unwise business decision.
“Emma Watson has a huge social following online and anything she appears in gets a ton of conversation,” Carlson notes. “But that might not translate to a movie that doesn’t attract her typically female audience.”

In an industry where movie stars – save, perhaps, Leonardo DiCaprio and Tom Hanks – no longer guarantee box office bucks, information on how a star’s standing tracks over time is crucial. So far, the company has monitored over a thousand films since its founding in 2009, which Carlson says lets them compare upcoming films to similar prior offerings to predict how the new release might fare. They also track movies for a custom time frame and can monitor for up to a year in advance, according to Carlson.

Fizziology’s information on ‘Ant-Man’, set to be released on July 17, 2015, shows 73% of the movie’s conversation comes from men. (Image courtesy Fizziology)

Similar Hollywood-focused startups include Moviepilot, which analyses social data and runs digital marketing campaigns, and ListenFirst Media, which studies engagement particularly for TV. While there are plenty of social listening platforms, such as Salesforce.com’s Radian6 and Crimson Hexagon’s offering, the trick for companies looking to break in is building relationships with studios.

Enter PreAct, a partnership between Hollywood stalwart United Talent Agency and movie monitoring company Rentrak. A sophisticated dashboard that lets studios monitor how successful their marketing campaigns are based on social media conversations, PreAct gives each film a score from 1-100, with a series of sub metrics that show the size, sentiment and nature of a conversation.

“The holy trinity in social conversation is volume, a large conversation; sentiment, people saying good things; and an organic conversation that is consumer driven rather than from studios or press,” explained David Herrin, head of research at UTA, a talent agency which represents the likes of Owen Wilson and Angelina Jolie.

Most importantly, PreAct examines movie data a year before the film is released and provides scores that change on a daily basis. This means that if a studio sees its first trailer is performing poorly from Facebook comments or that people don’t like a particular actor on Twitter, they can alter the second trailer and refocus marketing to save the box office fortunes of a flick.

“Measuring things a year out is a difference between course correction and bracing for impact,” explains Steve Buck, the SVP of business development of Rentrak which helped create PreAct with Herrin. “It’s truly changing the way things are done.”

Herrin began dabbling in social media data back in 2011, when he was interested in hearing how people were responding to film trailers during the Super Bowl. By 2012, Herrin had developed an internal tool to monitor how UTA’s clients were being discussed online when he happened to go for a casual lunch with Buck.

“Steve told me Rentrak was looking for some sort of social tracking product and was having a difficult time finding one he liked,” Herrin recalls. He took Buck back to his office and showed him the as-yet-unnamed tool; the duo started working on a marketable product almost straight away.

They rolled out PreAct in March 2014 as an add-on to Rentrak’s existing movie tracking dashboard, which interacts with 25,000 theatres around the globe through census-based surveys. Founded in 1977, Rentrak started tracking moves in 2001 and is already an industry standard, which gives the UTA-produced add-on an industry advantage.

Rather than employ human filters as Fizziology does, PreAct says they use a key word process to isolate film title and actor names so that they can ensure tweets about “the help” are referring to the 2011 film.

“If people are talking about a movie it will perform better at box office,” explained Herrin. For studios, more precise intelligence is crucial – where once a $50 million marketing budget for a blockbuster was considered weighty, publicity spending can occasionally swell to some $200 million for tentpole projects, according to the Hollywood Reporter.

PreAct is now used by some 70% of the major distributors and has tracked some 700 films to date, says Herrin. They catalogue all films that will be released in over 1,000 theatres, even if those movies aren’t being distributed by PreAct subscribers. Studios that do subscribe get info on every single movie, not just their releases, which makes it possible to compare outputs for individual stars or genres by searching the PreAct library. 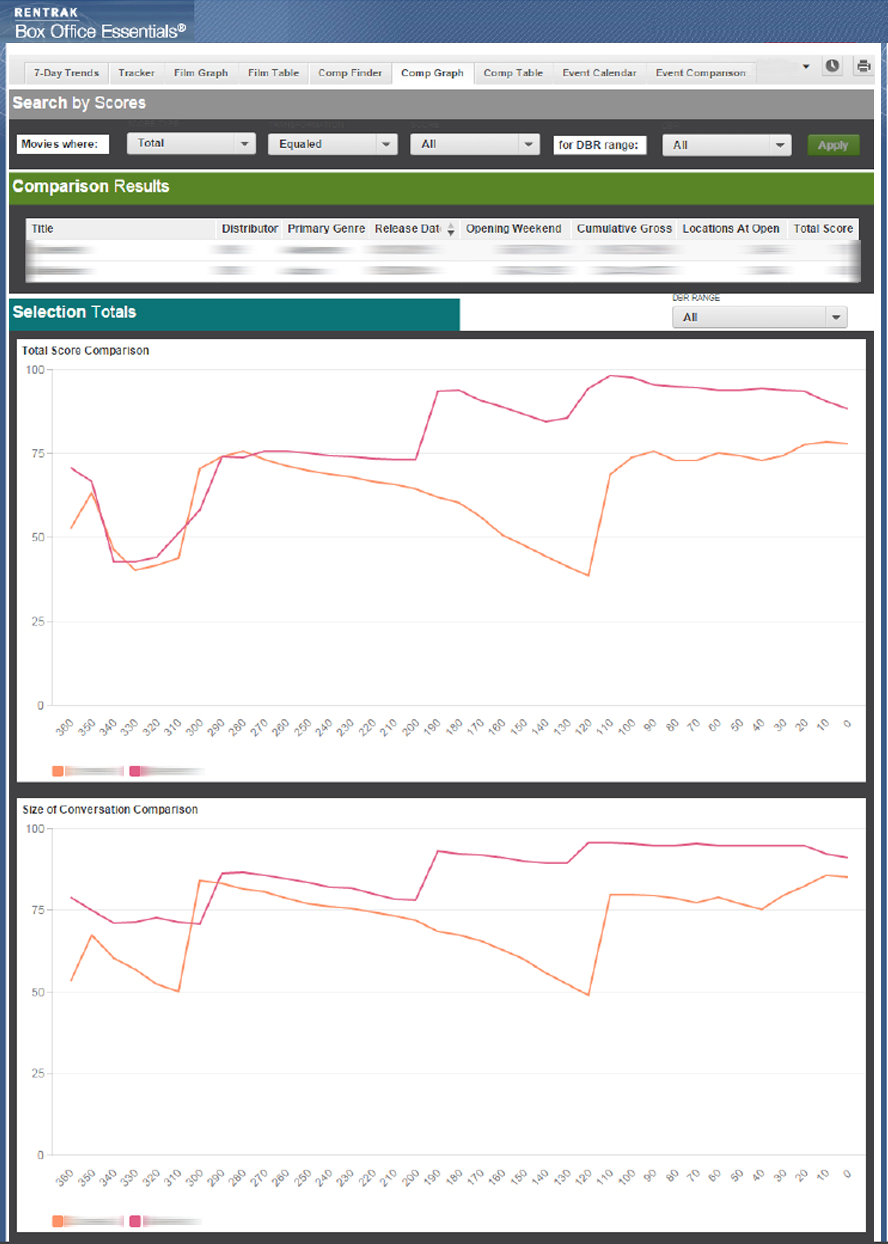 “You’re spending a lot of money to support a movie you believe in and want to see succeed so you need to be targeted with your messaging,” Buck reiterated. And studios are willing to spend to listen in, with the likes of 20th Century Fox and Sony Pictures Entertainment doling out hundreds of thousands of dollars for services such as PreAct and Fizziology.

Studios have also started using PreAct data to determine movie dates, says Herrin. Considering the importance of opening weekends in drawing crowds and headlines, studios need to ensure they don’t face heavy competition from similar films on their release date. The year-long lead of PreAct helps studios figure out where they could slot a release, based on how people are discussing competing movies.

For now, studios still spend relatively little on digital marketing, doling out around $10 million according to The Hollywood Reporter. But as more and more conversations take place online, you can bet your bottom dollar Hollywood will soon be spending big bucks to control them.

Check this out on forbes.com