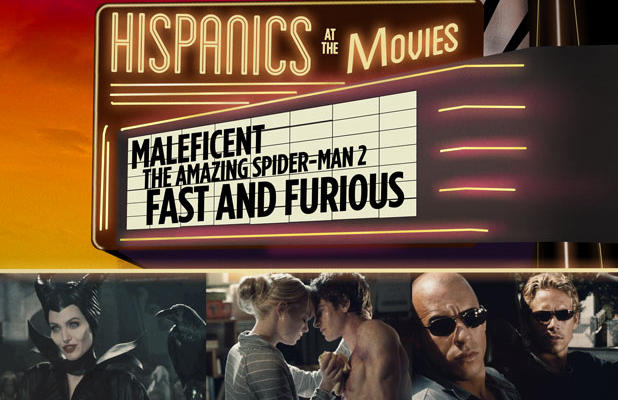 First in a series: Hispanics have accounted for at least 20 percent of opening weekend ticket sales for every hit this summer, Nielsen research shows

Hollywood experts love to fret about the future of the movie business, but the industry has begun to embrace one group that is indisputably on the rise: the Hispanic audience.

Hispanics are the fastest-growing ethnic group in the United States, and their passion for movies is unsurpassed. The group bought 25 percent of the tickets sold in 2013 though they comprise just 17 percent of the population, according to the Motion Picture Association of America's year-end study.

According to figures from the U.S. Census and a Nielsen report on movie audiences, Hispanics make up 15 percent of the population over the age of 12, and 19 percent of tickets sold for teens and older.

The group, defined by the U.S. Census Bureau as people of “Cuban, Mexican, Puerto Rican, South or Central American, or other Spanish culture or origin regardless of race,” is making its presence felt at the summer box office. The group has accounted for more than 20 percent of the audience for hits as disparate as “Maleficent” and “Godzilla,” according to data compiled by Nielsen and Univision.

“You don't have a major hit without Hispanic moviegoers,” Chris Aronson, Fox's president of domestic distribution, told TheWrap. John Fithian, the CEO of the National Association of Theaters Owners, dubbed Hispanic moviegoers “far and away the most important consumer at our cinemas” at the Produced By Conference in June.

As a result, movie studios, publicity firms, talent agencies and theater chains are all catering to the growing Hispanic audience like never before.

CAA and WME, Hollywood's two biggest agencies, have assembled groups to devise a strategy for the group. Universal and Warner Bros. have hired and promoted marketing executives dedicated to the same market while Pantelion, a joint venture of Lionsgate and Televisa, makes movies specifically for the Spanish-speaking market.

“We went in with the notion that the Latino market was underserved,” Paul Presburger, CEO of Pantelion, told TheWrap. “That turned out not be the case, for the most part. They are buying more tickets; Hollywood is serving them well, and it can do even better.”

Why invest now? Rapid growth. The ethnic group accounted for more than half of growth in the U.S. population between 2000 and 2010.

“Hispanics are becoming less of a niche audience and more a part of the mainstream,” Fabian Castro, SVP of multicultural marketing at Universal, told TheWrap.

The data supports his point. Hispanics have constituted more than 20 percent of the audience for the highest-grossing movies in May and June (see chart below), according to the Nielsen/Univision data. (This does not include July releases “Tammy” or “Dawn of the Planet of the Apes.”) 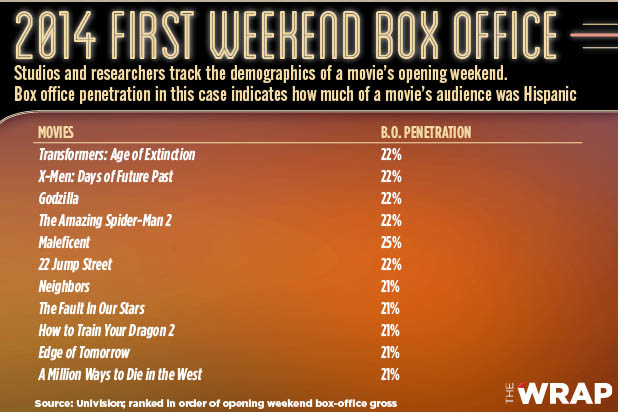 “The Fault in Our Stars,” for example, shocked most industry experts when it grossed $48 million over its opening weekend. Fox, the movie's distributor, owes 21 percent of those grosses to Hispanics.

Horror, action and comedy are considered the favorite genres of Hispanics and Latinos. Yet data suggests the Hispanic audience is increasingly vital to the success of movies in every genre. Between 2009 and 2013, the number of adult Hispanics who saw dramas rose by 15 percent while the audience for romantic comedies rose by 12 percent. The total audience for both of those genres dropped over the same time frame.

While movie studios rely on specific audiences for certain movies — women for romantic comedies, fanboys for comic book movies and African-Americans for select films — it can count on the Hispanic audience for all of the above.

“With a wide rollout you're going to reach [the Hispanic audience],” Aronson said. “Word of mouth spreads more quickly among that group, because they're more frequent moviegoers.”

Hispanics go to the movies an average of six times a year, twice as often as the average moviegoer, per the MPAA's report. Word of mouth is even more important within that audience because “Hispanic consumers are even more heavily engaged with their mobile devices than non- Hispanics,” according to a recent study by PriceWaterhouseCoopers.

Hispanics are also more likely to use their phones to shop, access the Internet and communicate with friends than non-Hispanics, according to the same report.

Many wonder if this sudden fascination with the Hispanic market is fleeting. Census data, studies, and successful movies have prompted interest before.

“This happens every few years, this renewed desire to take advantage,” Alexis Garcia, a partner at WME and former boardmember of the National Association of Latino Independent Producers (NALIP). “The question: is who will make a concerted effort to actually understand and embrace the market rather than just be reactionary?”

Studios have often recoiled after one negative experience, Bob Orci, the Mexico-born writer and producer of hit movies “Star Trek” and “The Amazing Spider-Man,” told TheWrap.

“The studio has one misfire, and they all say, ‘We're wrong; there's no targeting this market,'” Orci said. “That's not true.”

Check this out at TheWrap.com