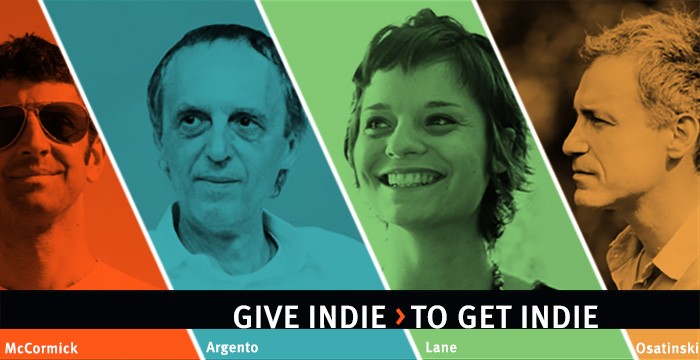 Fandor, the curated online distribution platform known for featuring indie shorts, features, and docs, announced the Filmmaker's Initiative (FIX) over the summer, and now they are kicking into high gear, and putting their money with their mouth is.

Working with filmmakers like Hal Hartley and Dario Argento, as well as lesser-known indie talents, FIX is, among other things, contributing to member filmmaker's crowdfunding campaigns. According to Fandor's Amanda Salazar, FIX is Fandor's attempt to build a "community of filmmakers," as well as "connect filmmakers and audiences in a meaningful way," so that the site isn't just a place for films to "sit and get clicked on."

The aim, according to Fandor, is for a filmmaker to have a place where all of their work can be displayed, like this page for legendary documentarian Al Maysles, as well as a resource for funding their new work. Fandor is working with its filmmakers' crowdsourcing campaigns, contributing a month's membership at the site for every $5 donated to a FIX filmmaker's project.

Right now, some of the FIX filmmakers with projects in development include Matt McCormick, horror legend Dario Argento, and filmmaker Gleb Osatinski, whose Kickstarter campaign for his sci-fi short, The Quantified Self, ends this week.

And how does a filmmaker get involved with FIX? Easy, says Salazar. Just submit a film to Fandor. If selected for the site, the filmmaker will automatically become a member of FIX. This "different approach to online distribution" aims to help "develop filmmakers," and if you're a filmmaker looking for a home for your work, as well as a platform to help raise money for your new projects, FIX might be worth checking out. Time will tell if this novel approach to online distribution and funding changes the existing paradigm of internet distribution, but so far, results have been good: FIX filmmaker Penny Lane's new work overshot its Kickstarter goal just last week.