First of all, the story of The Book of Life:

The story focuses on the romantic, strong-jawed Manolo, who has big problems besides the growing competition with his best friend. Manolo dreams of breaking away from his family’s rich history of bullfighting to play the guitar, much to the dismay of his father, the world’s greatest matador (Hector Elizondo) and super-macho grandfather (Danny Trejo).

This journey takes him from the Land of the Living to the Land of the Remembered, where people who have lived complete lives, and are remembered among the living, go after they die. A final, daunting destination is The Land of the Forgotten, where those who have died with unfulfilled lives dwell.

Along the way Manolo meets his bullfighter great-grandfather, who always wanted to be an opera singer (Placido Domingo) but never followed his dream. There are also wild characters including Candle Maker (rapper Ice Cube), an ancient god with a body of wax and a beard made of clouds. 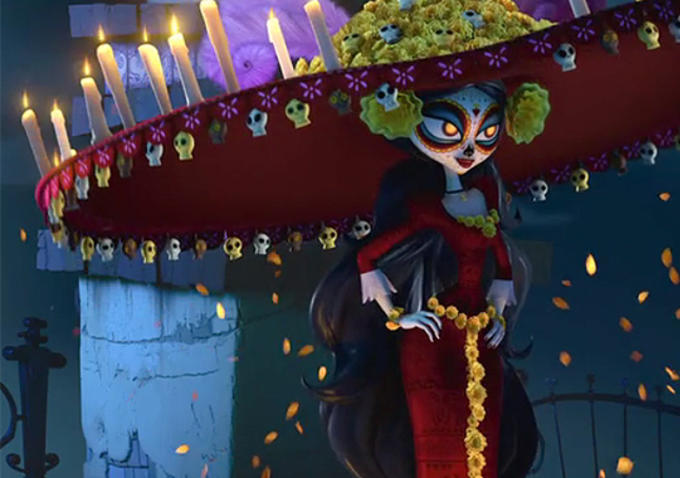 Some weeks ago, Fox invited some scribes over to the Little Theatre to see preview footage of Guillermo del Toro-produced 3D animated/action adventure comedy/romance “The Book of Life,” which comes out October 17, just before Halloween.

“I saw purity and uniqueness,” Del Toro told us. “I saw a world so unique and powerful that could embody the complexity of the culture he was trying to represent. The worst thing is when something looks like every other animated movie. The worst thing that is happening to film is that it will uniform itself into one flavor. This has an identity. It has the possibility of being universal because it is so particular. We’re creating a dish with a world of flavor, with a delicious mole sauce, chile, chocolate, peanuts. Otherwise you end up with catsup.” 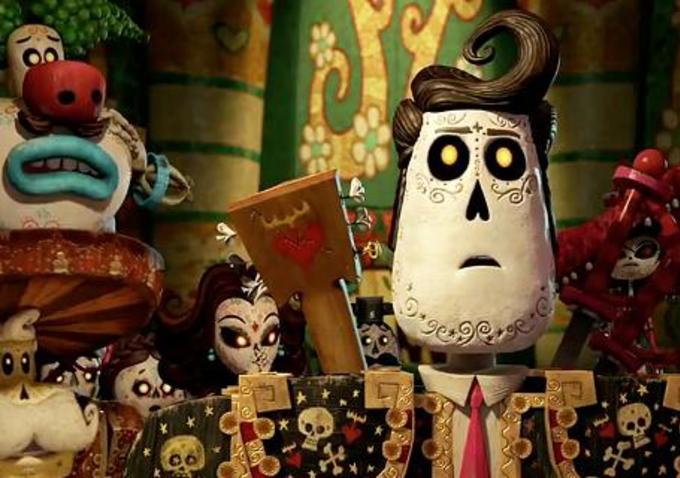 This Mexico, Del Toro promised, “is not just as folklore memory. It’s punk, scat, rock ‘n roll modernity. It’s a colorful and playful celebration of the life of all those who came before us.”

“He’s the Mother Theresa of film,” said the grateful Gutierrez, who showed Del Toro his shorts. “It’s crazy.” He credits his producer with keeping him focused, on a simpler track, trying to get his “ideas across in a cleaner way.”

The movie is also, Bollywood-style, about unabashed big feelings. “The new punk is emotion,” said Del Toro. “The world is so cynical.” Gutierrez is also respectful of the women in his movies: his wife Sandra designs them, while he sticks to the males.

The two filmmakers and Argentinian composer Gustavo Santaolalla had fun combining volatile musical elements, creating hybrids of 90s bands Radiohead and Cafe Tacuba, Elvis Presley and other musical cultures. One song is a ranchero version of “I Will Wait for You.” Paul Williams composes two original songs.

HD trailer here and below:

Check this out on Latino Weekly Review.