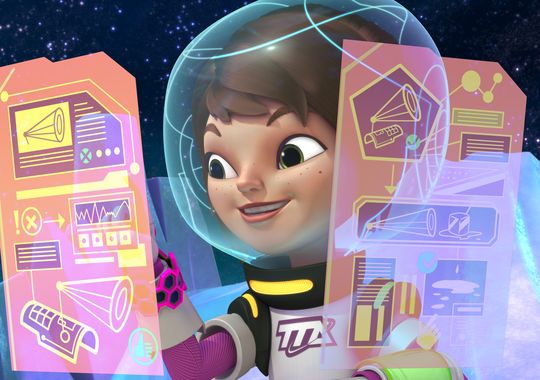 Loretta, the sister in "Miles from Tomorrowland," uses her passion for science and coding to find new worlds. (Photo: Disney Junior)

SAN FRANCISCO — For many male scientists, the high-tech hook was set by Star Trek and Star Wars. Now Google hopes to increase the number of future female hires by counting on the appeal of a math-savvy cartoon character named Loretta and a code-loving foster kid named Mariana.

As tech continues to fuel economic growth here and internationally, there's a growing need for employees who are fluent in the digital language of the trade. In fact, by 2020, there will be a million more computer jobs than students with that degree, according to Code.org.

That's led to a push to get more people of color into the computer science pipeline — and women of all races into the field.

Which is where Loretta and Mariana come into play. They're characters in two Disney-ABC Television Group shows — Miles from Tomorrowland and The Fosters — who, with Google's assistance, have embraced computer science in order to cast a positive light on girls who code.

"Our research shows that for girls when it comes to focusing on a career, perceptions of that profession rank second in importance only to parental encouragement," says Julie Ann Crommett, who headed diversity efforts at NBC Universal before joining Google in 2013 as program manager for computer science education in media. She recently was part of a tech-meets-Hollywood panel at SXSW in Austin called Decoding Percepciones: CS, Latinos and Storytelling

"If we want to expand the employee pipeline, we must tackle this because girls who don't see others like them in the field tend not to go into it," says Crommett. "TV can have an impact. The popularity of CSI led to a big jump in people going into forensic science, and many of them were women."

Google's assistance to Disney-ABC ranged from offering advice about computer scientist personalities to helping write code sequences that would translate well on the small screen. (Random House might have used that sort of counsel before putting outa kids book last fall called Barbie: I Can Be A Computer Engineer, which featured the famous doll calling her male friends to help troubleshoot computer problems.)

"I'd read a lot about the efforts to get girls to code" by groups such as Girls Who Code and Black Girls Code, says Sascha Paladino, creator of Disney's cartoon, Miles from Tomorrowland. "In our show, the brother is creative while the sister is scientific, and I thought if we can help boost the numbers of girls who think science is cool that would be great."

Paladino used Google's input for an episode that features Loretta discovering a new planet thanks to coding. "I learned there's a difference between coding that's beautiful and coding that's not. The idea that there's an elegance to it was new to me."

For Nancy Kanter, executive vice president of original programming for Disney Junior Worldwide, the idea to partner with a big tech company to help push science was a throwback.

"So many of today's scientists say that what inspired them in part were shows such asStar Trek and movies like Star Wars," says Kanter. "We need to do what we can to help girls imagine what they can be. I took it as a great sign that the star of Gravity (Sandra Bullock) was a woman scientist."

Check this out at USAToday.com