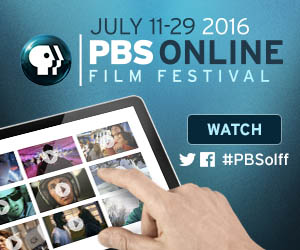 PBS announced the 25 films that will be part of the fifth annual, Webby Award-nominated PBS Online Film Festival on July 11-29, 2016. NALIPster filmmakers Evan Apodaca and Eli Jimenes are among those featured in this year’s Festival for their films Que Lejos Estoy and Capoeira.

Beginning July 11, the festival will be available via PBS and station digital platforms, including PBS.org, YouTube and PBS social media channels. The films will also be available via the PBS app on iOS, Android, Apple TV, Roku and FireTV devices.

Viewers are encouraged to watch, vote and share their favorite film by going to pbs.org/filmfestival. The film with most votes will receive the “PBS People’s Choice” award.

Check out the NALIPster films and vote!

The PBS Online Film Festival showcases powerful and engaging stories from filmmakers across the country. The festival has become a popular annual online event, attracting more than 1.5 million video streams over the first four years, as well as nominations in the Webby Awards.

“PBS and its member stations are proud to be the home for independent filmmakers and to provide a platform for diverse voices to showcase their unique stories and talent,” said Ira Rubenstein, Senior Vice President and General Manager, PBS Digital. “Through the PBS Online Film Festival, we are giving a national audience the opportunity to watch 25 engrossing, high-quality independent films on-demand and, for the first time, vote for their favorite film through social voting.”

PBS, with 350 member stations, offers all Americans the opportunity to explore new ideas and new worlds through television and online content. Each month, PBS reaches nearly 100 million people through television and nearly 33 million people online, inviting them to experience the worlds of science, history, nature and public affairs; to hear diverse viewpoints; and to take front row seats to world-class drama and performances. PBS’ broad array of programs has been consistently honored by the industry’s most coveted award competitions. Teachers of children from pre-K through 12th grade turn to PBS for digital content and services that help bring classroom lessons to life. PBS’ premier children’s TV programming and its website, pbskids.org, are parents’ and teachers’ most trusted partners in inspiring and nurturing curiosity and love of learning in children. More information about PBS is available at www.pbs.org, one of the leading dot-org websites on the Internet, or by following PBS on Twitter, Facebook or through our apps for mobile devices. Specific program information and updates for press are available at pbs.org/pressroom or by following PBS Pressroom on Twitter.