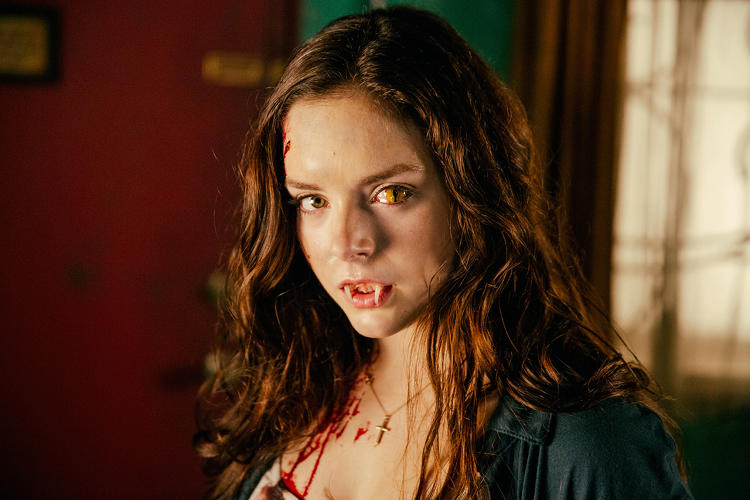 The From Dusk Till Dawn director explains El Rey’s strategy for branded content and shows off what he did for his first client.

Robert Rodriguez’s career has jumped all over the place: From indie darling behind El Mariachi, to Quentin Tarantino collaborator (on Four Rooms,From Dusk Till Dawn, and Grindhouse), to Spy Kids franchise builder, to the boss at his own cable network, Rodriguez has built his identity on continually finding ways to do more and more with what he has—which is a diligent work ethic, a full studio of his own in Austin, and an unceasing drive to keep creating.

The latest arm of Rodriguez’s empire is El Rey Digital, where he’s creating branded content in the El Rey style—exemplified by shows like From Dusk Till Dawn and—for companies who want access to his aesthetic (and audience). And one of the first brands to take advantage of the resources that Rodriguez can bring to bear on a project is Swedish sock purveyor Happy Socks. The company, which is famous for collaborations with everyone from Snoop Dogg to David LaChapelle to Minecraft, tapped Rodriguez to both design socks and create a short film for the company to show off the wares—a challenge that Rodriguez jumped at immediately. Not just as a chance to create something original for a brand whose socks he admires, but also as a chance to show off what he can accomplish with El Rey Digital. 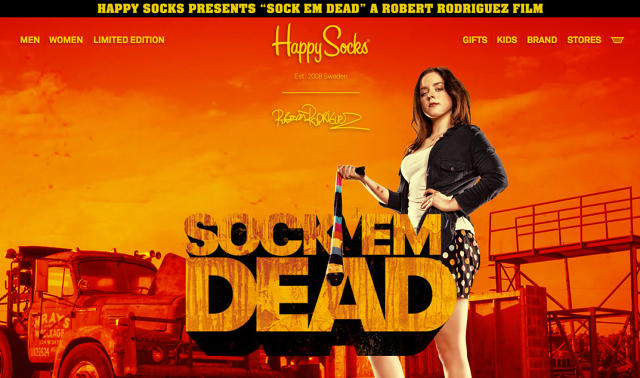 The film, "Sock ‘Em Dead," stars From Dusk Till Dawn’s Madison Davenport as an actress working on a vampire film—not a huge stretch—whose trip to the FX trailer gets a little more real than her director (played by Rodriguez himself) anticipated. And Rodriguez says that putting together that concept was something he was able to get together on the fly. "You can do that pretty quickly if you think about it like, ‘Okay, I’ve got socks, I’ve got this place, how can I utilize these cool sets?’ It just worked out that they were still using that set, so it was already lit," Rodriguez says. "So we just had to schedule all of this around when Madison was free, and when they would still be on that set, but with enough time to sneak and not dominate their whole schedule, because they have a TV show to shoot." 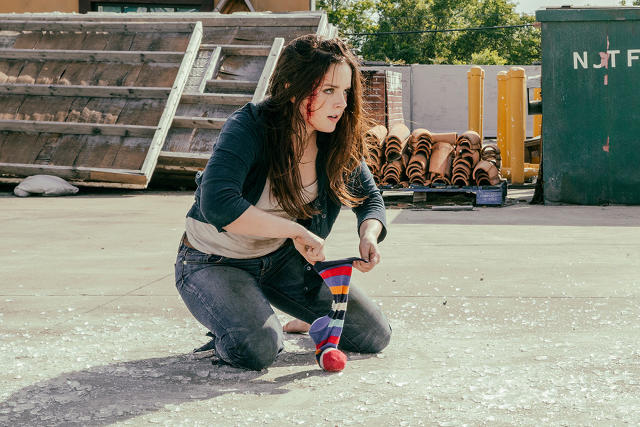 That makes things pretty intense at Rodriguez’s Troublemaker Studios, but the benefits outweigh the scheduling concerns, the director says. "[Happy Socks] benefit from getting all of the production value, if I can just haul inMariachi-style, and grab this stuff while people are in their in-between moments," he explains—but it’s not just about delivering something extra for the client. Making use of the sets when they’re off-camera is something Rodriguez has long been interested in. "Doing multiple movies on the same sets is something I’ve always wanted to do," he explains. "One time I visited JJ Abrams on the second Star Trek set, and they had this whole set already lit on the Bridge, so they’re shooting in one section, but the other part is just lit. I was like, ‘Man, I wish I had my camera together, I would take Spock and Kirk, who aren’t even working right now, and just shoot a short film in the hallways called ‘Set Phasers To Kill!’" How badass would that be?"

Star Trek fantasies aside, Rodriguez sees the abundance of assets at his studio as something he can deliver to clients as some value-added. (In "Sock ‘Em Dead," Rodriguez brings not just the shooting location, the makeup effects, and Davenport, but also Danny Trejo and From Dusk Till Dawn’s Wilmer Valderrama, who were on set that day for a TV shoot. "We want to make cool stuff using my backlot, because we’ve got sets lying around and talent running around, especially when we’re in production," Rodriguez says. "‘You’ve got Trejo there, let’s shoot something with him!’ That was a cool way to show a proof-of-concept. Happy Socks and I were gonna do this thing together, and their timing was perfect—it doesn’t always have to be tied into From Dusk Till Dawn, but when they tie into the the machine that’s here, we can over-deliver to clients, and show that we’ve got a television network and a studio, and if they come to do something with me, they’ll get a lot more bang for their buck."

Check this out at fastcocreate.com