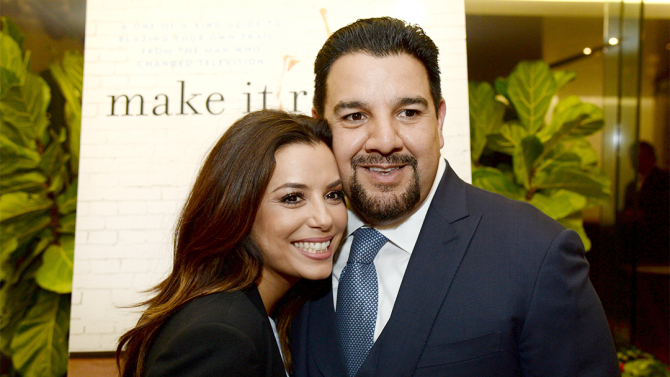 Endemol Shine North America Co-CEO Cris Abrego’s book launch party brought out the who’s who of reality television Thursday night at CAA headquarters in Century City. It was even offhandedly dubbed the “prom of reality TV” by CAA’s Christy Haubegger.

“What would be a reality get together without a lot of booze?!” Abrego quipped during the launch party of his new book, “Make It Reality.”

Those who came out to support included Abrego’s partner and Endemol Shine’s other Co-CEO, Charlie Corwin; Monami Entertainment CEO Mona Scott-Young; and Bunim/Murray Productions co-founder Jonathan Murray. The latter was given a warm thanks during Abrego’s speech, which detailed how his big break in reality television came after being promoted from camera assistant to production coordinator on the set of “Real World/Road Rules.”

“The way that I got promoted was that the show was going to Mexico, ‘Road Rules,’ and out of over 100 employees, I was the only one who spoke Spanish,” Abrego recalled. “It was like the one time being Mexican paid off.”

Eva Longoria noted their similar cultural background during the evening, stressing that the entertainment industry needs more Latinos behind the camera. The actress also joked about how they bonded as friends, in part, by being part of a very small club of Mexicans in showbiz — adding that Mario Lopez and George Lopez rounded out their minority representation.

“I have been so honored to work beside him as a great producer, but he is also a great leader in our community,” Longoria stated. “It’s so important for young Latinos to see your story because we can’t be what we don’t see.”

That disparity in particular is one of the reasons why Abrego decided to write down his Hollywood success story in the first place.

“The timing of the book became not so much where I was in my career, more about where I was in my life in terms of philanthropy,” Abrego told Variety. “With the kids that I’m working with in El Monte at my old high school, I felt like there was a need to go wider with that story and let these kids know that it was very much a possibility to pursue their dreams — especially in entertainment.”