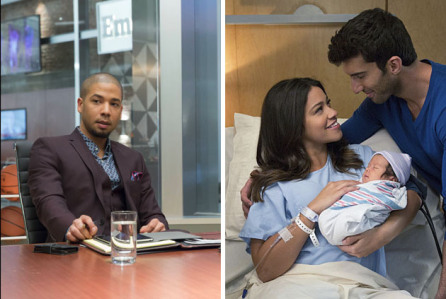 The 67th Emmy Awards nominations were announced this morning and even though the ceremony won’t be broadcast on Fox until September 20, there already were winners and losers. The former being those who are in the big TV race like Mad Men, House Of Cards and Better Call Saul. The latter, of course, being the would-be or expected contenders who didn’t make the cut. Here’s some of the big snubs of the 2015 noms – feel their pain.

Empire – The biggest show on broadcast that isn’t sports, the hip hop drama broke a lot of barriers in its first season but not the TV Academy voters favor. Yes, Taraji P. Henson got nominated but Terrence Howard didn’t. Also, this series getting overlooked has to be even more of a shock as the Emmys are on Fox this year and that’s got to hit a bad note.

The Americans – Another year, another snub. Yes Margo Martindale got an Outstanding Guest Actress nom but otherwise the Cold War on this FX drama grinds on.

The Walking Dead – It has become tiresome how the TV Academy denies the most popular show on TV any significant Emmy recognition year after year – and once again today. The slight against the zombie apocalypse series must bite even more after the heavy emphasis on Drama FYC campaign that AMC put on this year to get voters to overcome their prejudice and give TWD and stars Andrew Lincoln and Melissa McBride a fair shake.

Jane The Virgin – A Peabody Award, Golden Globe win for lead Gina Rodriguez, AFI and Critic’s Choice noms and yet, despite a witty campaign for Rodriguez, the TV Academy voters shunned The CW romantic comedy. America is ready, looks like Emmy voters weren’t.

Vincent D’Onofrio – The former Law & Order: Criminal Intent and past Emmy-nominated actor owned the streaming screen as baddie Wilson Fisk AKA The Kingpin in Netflix and Marvel’s Daredevil …but that grasp wasn’t enough to snag a nom today.

The Affair – The Showtime series took home the Golden Globe for Best TV Series Drama earlier this year. Ruth Wilson grabbed the Globe for Best Actress too. Emmy voters decided that was all the love The Affair going to get. Tough love.

Ellie Kemper – Unbreakable Kimmy Schmidt got nominated but not the actress who held the whole Netflix comedy together? That’s an Emmy doomsday scenario if ever I’ve heard one.

Grace & Frankie – Do the voter math – the new Netflix comedy comes from Friends co-creator Marta Kaufman, it stars regal favs Jane Fonda and the incomparable Lily Tomlin plus President Bartlett AKA Martin Sheen and L&O’s long standing D.A. AKA Sam Waterson. That should have all added up to an Emmy nomination, but even with legacies like that, it looks like new math won out, Tomlin got a nom but G&F lost out.

The Big Bang Theory – The hugely popular CBS comedy from Chuck Lorre and Bill Prady never wins but it gets in the race. That’s not the science this year – and nothing for Jim Parsons either, which must be the cold fusion of this year’s race!

Sissy Spacek – As the weary but indulgent matriarch Sally Rayburn in Netflix’ Bloodline, which was bathed in other noms, the Academy Award winner was a standout among a stellar cast. Not enough to garner TV Academy voters attention it seems.

The Good Wife – The CBS show used to fly the flag for broadcast in the Drama Series category but the past few years have seen it absent. Looks like 2015 continues that trend and is a bad year for The Good Wife.

Girls – Adam Driver got a nomination but otherwise Lena Dunham’s HBO show was spurned by TV Academy voters – which is unusual for a multi-past nominee.

Andy Samberg – The Brooklyn Nine-Nine star got a Golden Globe for the Fox comedy back in 2014 but was put in Emmy jail on Thursday – and he’s hosting the ceremony in September!

Constance Wu – She was the breakout from newbie Fresh Off The Boat, but Emmy voters just weren’t feeling like making a healthy choice today

The Missing – Yes, the Starz and BBC tale of a child gone missing was hard to watch because of the grueling subject matter and raw performances by James Nessbit and Golden Globe nominee Frances O’Conner but that is what made it so compelling. The TV Academy went AWOL on that today.

Judith Light – The secret weapon of Transparent, which got multiple other noms today, the former Who’s The Boss star and past Emmy nominee saw some nom appreciation from the Critic’s Choice Awards this year but nothing from the TV Academy.

Justified – It’s the last season, couldn’t the FX series have gone out on a high?

The Newsroom – It wasn’t on most people’s breaking news list but last seasons are usually a crowd favorite among the TV Academy for nominations. Add to that the HBO show got a Lead Actor and Guest Actress Drama noms for Jeff Daniels, who won in 2013, and Jane Fonda. Well, sorry Aaron Sorkin, guess voters changed the channel on the show, which came to an end on December 14 last year.

Bill Maher – Moving into the 2016 Presidential campaign, there is nothing funny about leaving HBO’s topical and cutting Politically Incorrect host off the nominations list.

Check out more at Deadline.