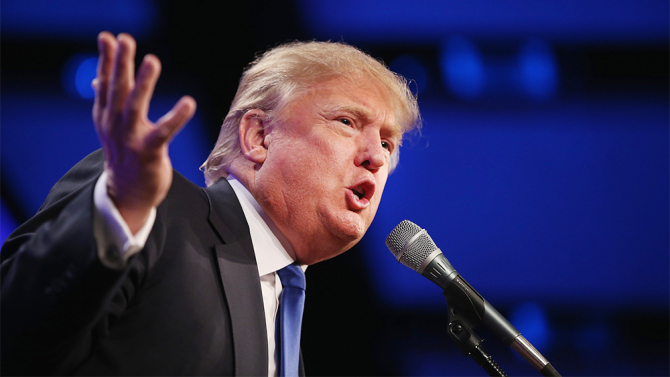 Donald Trump has filed a $500 million lawsuit against Univision Communications after the company scrapped its planned telecast of the July 12 Miss USA beauty pageant as a result of Trump’s disparaging comments about Mexican immigrants.

In a lengthy statement about the lawsuit, Trump reinforced some of the same beliefs that led Univision to drop the telecast. NBC on Monday severed ties with Trump after more than a decade of close association with the New York real estate developer. NBC also pulled out of the planned July 12 live telecast of the pageant, to be held in Baton Rouge, La.

Trump stirred outrage at a June 16 news conference announcing himself as a candidate for the GOP presidential nomination when he described many Mexican immigrants as criminals and “rapists.” Univision and NBC have condemned Trump’s statements and cited them as the reason for yanking the pageant telecast.

“Nothing that I stated was different from what I have been saying for many years. I want strong borders, and I do not support or condone illegal immigration. There is a high level of crime occurring in this country due to unchecked illegal immigration. This is a major security issue for the United States,” Trump said. “Additionally, the terrible trade deals our government is routinely entering into with Mexico are causing great financial harm to our country. We are losing a huge number of jobs, manufacturing opportunities and money due to poorly negotiated trade deals, a fact that is indisputable. That won’t happen if I become president— this disturbing trend will end, and it will end quickly.”

Univision was just at the start of a multi-year contract for the Spanish-language rights to the Miss USA and Miss Universe pageants. NBC is in the unusual position of pulling its own property as it has been a 50-50 owner of the pageant franchise with Trump since 2002. Televisa, a part owner of Univision and Mexico’s largest broadcaster, has also scrapped plans to carry the Miss Universe pageant.

“We just reviewed Mr. Trump’s complaint for the first time, and it is both factually false and legally ridiculous,” Univision said in a statement. “We will not only vigorously defend the case, but will continue to fight against Mr. Trump’s ongoing efforts to run away from the derogatory comments he made on June 16th about Mexican immigrants. Our decision to end our business relationship with Mr. Trump was influenced solely by our responsibility to speak up for the community we serve.”

In his statement on the lawsuit, Trump claimed he got a call from an unnamed “high-ranking” Univision executive apologizing for the company’s decision. Trump has previously asserted that the Spanish-language media giant acted under pressure from the Mexican government.

“I have great respect for Mexico and love for the Mexican people and their tremendous spirit! However, their leaders and trade negotiators are far smarter than those representing the United States, and our citizens and economy are suffering greatly as a result. We have to remedy the situation and do it fast. These have long been my views and I have the courage, unlike many others, to express them,” Trump said.

The complaint asserts that Univision and NBC are attempting to suppress Trump’s First Amendment rights by putting pressure on his business ventures. The complaint cites Univision’s ties to Haim Saban, a longtime supporter of fellow 2016 presidential contender Hillary Clinton. It notes that Trump “has dramatically risen in the polls while expressing critical views of Mrs. Clinton.”

Ciurana was cited in the complaint for having posted a picture on his Instagram account that compared Trump to Dylann Roof, the man charged with the slayings of nine African-Americans in a church in South Carolina. The post was later taken down, but not before it became “the subject of hundreds, if not thousands of press articles, yet another example of Univison’s dubious efforts to create a false narrative in an attempt to upset Mr. Trump’s longstanding personal and business relationship with the Hispanic community,” according to the complaint.

The suit seeks $500 million in damages for breach of contract, defamation and intentional interference with a contractual relationship.