by Tambay A. Obenson 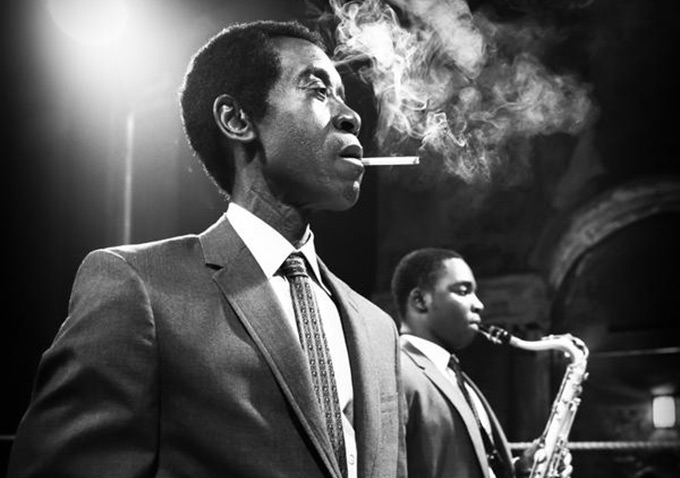 Absolutely nothing here that we haven't already talked about ad naseam, but I thought you'd all like to know about it anyway.

In brief, while addressing the press after the screening of his "Miles Ahead" at the Berlin Film Festival earlier today, Don Cheadle shared that he wanted to make a film about Miles Davis that was as "explosive" as the jazz legend's music, but he wasn't even able to get it off the ground (in terms of financing) without a white co-star.

Thus, enter the character played by Ewan McGregor in the film.

Cheadle called the decade-long effort to get the film produced, a "Herculean" task, thanks to the lack of interest from studios and other industry financiers. So he had to take to crowdfunding, launching an Indiegogo campaign, which successfully raised about $360,000 total. He also used some of his own money to help fund the film.

In essence, he wasn't able to make the film he really wanted to make, because he could not raise the necessary funds to make *that* film, and apparently almost wasn't even able to make a film at all ("explosive" or not), unless he added a white co-star.

Calling it "one of the realities of the business that we are in" - essentially, the self-fulfilling prophecy that films with all-black casts won't sell as well as those with white actors in them - Cheadle added, "There is a lot of apocryphal, not proven evidence that black films don't sell overseas... Having a white actor in this film turned out to actually be a financial imperative."

A "financial imperative" he said!!

And thus, he was forced him to rework the script, adding the character McGregor plays -a shady Rolling Stone reporter - turning the film into something more akin to an interracial buddy-action-comedy flick, than something that would be truly worthy of Miles Davis.

"I wanted it to be a movie that Miles Davis would want to star in. He would have laughed at it, he would've dug it and been like 'That's slick, I didn't do that -- that's bullshit -- but I like that'," Cheadle said. "That's what I wanted - a movie that felt like the experience I have when I listen to his music... I wanted to do something explosive, exciting, that felt like a ride and felt impressionistic and free form because that's what his music does to me."

This is all actually a somewhat sweet & sour realization for me, because, as I said in my review of "Miles Ahead" after I saw it at the New York Film Festival last fall, if I did have one expectation going into the screening, it was that I was more than prepped for something entirely unconventional, given what Cheadle previously shared about the film - essentially, a film that Miles Davis himself would make, employing the organic, experimental approach he used in creating some of his best music; notably an album like "Bitches Brew," which was recorded in just three days. Like Davis, a rejection of the traditional (jazz / filmmaking) in favor of an approach that's more aggressive, free-form and, I even also used the word "explosive" in my review as well. And you can see Cheadle going for that in "Miles Ahead," but, as I argued, not quite enough. I then added that he may have been constrained by the fact that he needed to create something that could sell a few tickets, and not be painted with the sometimes dreaded "intellectual cinema" (read: inaccessible) brush. So we are presented with what you'd call a more conventional, commercial narrative, a fictional crime caper that sees Davis teaming up with an ambitious white journalist to track down a much-coveted stolen tape of a recording session.

So, in summary, it's good enough; but given the legend that is the subject matter, and the paucity of films in which his story is central, I argued that it needed to be better than "good enough" - if not great!

Knowing some of the backstory today on the making of the film that I wasn't fully aware of previously, months after seeing the film, it makes sense I suppose. Not that I'm pleased by this; quite the opposite. But this new awareness of what Cheadle's original intent was, and knowing that this wasn't just the case of him simply not meeting expectations, but that he was constrained in what he could and couldn't do, helps.

"I think it works great, and particularly the fact that Ewan McGregor is the actor who is in it, I think he is fantastic in the movie. But that was a component of... allowing us to even have a budget to get the film made," he said in closing on that subject.

An unfortunate reality. One that we've discussed endlessly on this blog. But something that I believe will change eventually.

Sony Pictures Classics will release "Miles Ahead" in April.

Check this out on IndieWire.com