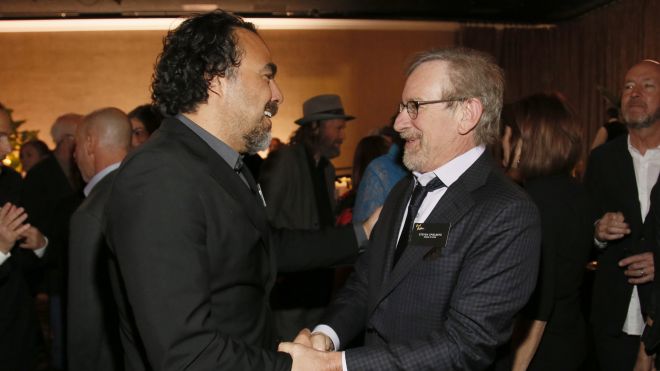 For Colombian filmmaker Ciro Guerra, meeting up with filmmakers Alejandro Gonzalez Iñarritu and Emmanuel Lukezki at the annual luncheon for Oscar nominees on Monday was an opportunity to show that amid the discussions of lack of diversity at the Academy Awards, there is some that should be celebrated.

“It was nice to meet the Latin American nominees,” Guerra said. “We are not many but being with Ale (Abreu) or the guy from Chile (Gabriel Osorio) or with Alejandro and Emmanuel, and feel that the Latin Americas are having an impact and we create a small clique within the nominated, therefore, is special.”

While the luncheon was full of schmoozing and love, diversity and #OscarsSoWhite dominated many of the discussions backstage.

Sylvester Stallone, who became a focal point in the controversy for being the sole nominee (supporting actor) from "Creed," which had both a black director and lead actor, said he consulted with director Ryan Coogler as to whether or not he should attend at all.

Prior to the luncheon at the Beverly Hilton Hotel in Beverly Hills, Calif., various nominees stopped to speak to a room of reporters about everything from finance reform to fashion. Iñarritu posed for photos, but did not stop to speak with reporters.

However, those who did, have the question of diversity both at the Oscars and the industry at large on their mind.

McCarthy said he has faith in the film community's ability to push the needle for change.

“Mad Max: Fury Road" director George Miller said that from his standpoint, casting is story-driven and commented how television has been ahead of the game in diverse casting.

Rooney Mara, nominated for her supporting performance in the 1950s-set lesbian drama "Carol," said she had just read an article the other day suggesting that there should be a hashtag for "Oscars so straight."

"These are all important conversations for us to be having," Mara said.

Isaacs tried to steer the focus back to the nominees at large inside the room.

"This year, we all know there's an elephant in the room. I've asked the elephant to leave," said Isaacs in her opening remarks. "Today is all about your incredible work."

The annual event brings together over 150 nominees to celebrate the honor before the golden statuettes are actually handed out at the 88th Academy Awards ceremony on Feb. 28.

Based on reporting on the Associated Press.

Check this out on FoxNews.com