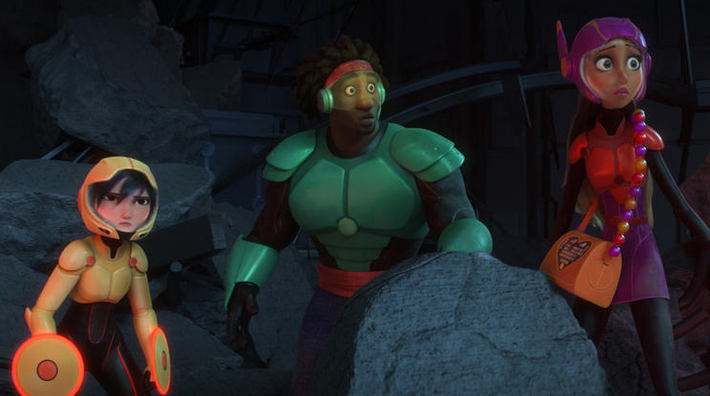 Amid the complaints over the lack of ethnic diversity in the major Oscar categories, critics and defenders alike failed to notice that one nominee featured a cast that included two women (one of them Latina), an African American and an Asian American: Disney's "Big Hero 6."

That's less surprising than it might first appear; animated features frequently offer more diverse casts than their live-action counterparts. For example this year's Oscar-nominated "How to Train Your Dragon 2" from DreamWorks animation includes the formidable Valka (Cate Blanchett), Hiccup (Jay Baruchel), the hero with an amputated leg, and vocal performances by Djimon Hounsou as Drago Bludvist and America Ferrera as Astrid.

The cast of the original "Big Hero 6" comic was not ethnically diverse. Co-director Don Hall explains, "They're essentially a Japanese superhero team, a kind of Japanese Avengers. In our first discussion with Marvel, they said, 'Take this and make it your own.' We took the Japanese aesthetic from the comic, which we thought was very cool, but applied it to San Francisco because it's iconic. Once we had our world of San Fransokyo, it became a no-brainer that the cast of the movie should be very multicultural."

"We decided it was going to be a multicultural cast right away," continues co-director Chris Williams. "Very early on, I was doodling this African American character and really liked the idea of short dreads."

Animated characters are caricatures of their real world counterparts; designing an ethnic character poses special challenges. The character's ethnicity has to be clear, but the artists must avoid the demeaning imagery used in the racial cartoons of the '30s and '40s.

The 2009 Oscar-winning Pixar film "Up" featured over-eager Korean American scout Russell (Joran Nagai), who bonds with an old white man (Ed Asner). The film's director, Pete Docter, noted that "When we were designing Russell, we were very lucky to have input from Pete Sohn. Pete's a Korean American who grew up outside New York: He storyboarded some of the first sequences with the Russell character.

"I was worried that the way I was drawing the shape of his eyes might be falling into a potentially offensive stereotype. Pete said, 'Korean eyes are shaped differently than Caucasian eyes: Just draw what's there — that's truth.'"

The push for greater diversity in animated features began at Disney two decades ago, the era of "Pocahontas" (1995) and "Mulan" (1998), which featured the studio's first Native American and Asian heroines, and "Lilo & Stitch" (2002). Dean DeBlois, the writer-director of "Dragon 2," served as co-head of story on "Mulan" and co-writer/co-director on "Lilo." He recalls, "When I joined Disney in 1994, there was an emphasis on finding classic Disney-esque stories from different cultures around the world."