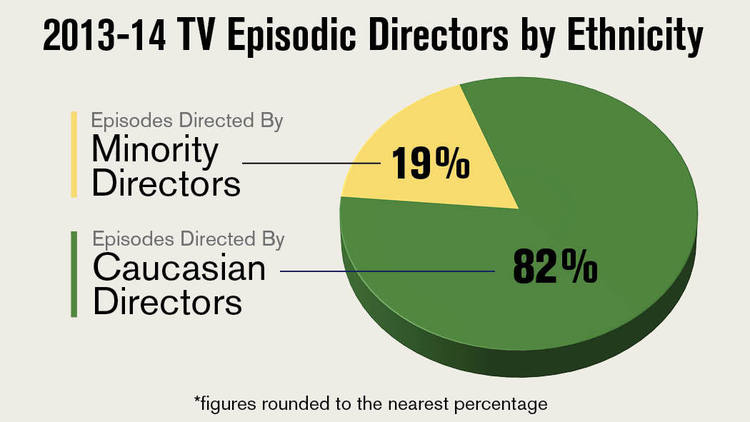 Cable channels and broadcast networks have made little progress when it comes to hiring female and minority directors on episodic television shows.

That's the conclusion of the latest report from the Directors Guild of America analyzing the ethnicity and gender of directors hired for prime-time television shows across broadcast and cable networks, as well as programs made for the Internet.

The DGA analyzed more than 3,500 episodes produced in the 2013-14 television season from more than 220 scripted series.

The guild said the increase in episodes directed by minority males was attributable entirely to a single director, Tyler Perry, rather than a reflection of broad improvement in diversity hiring.

“Unfortunately, it can be shockingly difficult to convince the people who control hiring to make even small improvements to their hiring practices,” DGA President Paris Barclay said in a statement. "It’s time for the people who make the hiring decisions — be they studios, networks, production companies or individual producers — to stop making excuses, stop passing the buck and start living up to the country’s promise and possibility by providing true equal opportunity.”

The report also found that out of 225 series examined, 23 (10%) hired no women or minority directors at all, and 39 more series (17%) hired women or minorities to direct fewer than 15% of episodes, according to the guild.

Shows that had the poorest diversity records and landed a spot on the DGA's "worst of" list for a second year in a row included: "Bates Motel," "Boardwalk Empire," "Californication," "Castle," "CSI: Crime Scene Investigation," "It’s Always Sunny in Philadelphia," "The Mindy Project" and "NCIS."

Shows that hired women or minorities to direct at least 40% of episodes, making the guild's "best of" list, included "The Real Husbands of Hollywood,"  "Mike & Molly," "Homeland" and "Modern Family."

Check this out on LATimes.