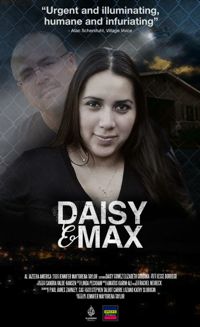 Outside the Box [Office], USC Annenberg, Specific Pictures, and Al Jazeera America, invite you and a guest to a special screening of Daisy & Max

About Daisy and Max

Set in the part of L.A. popularly known as South Central, Daisy & Max explores the world of gang violence intervention workers, the long shadows of mass incarceration on families and children, and the lives of Latina and African American women who will risk everything to make their communities just a little safer.

As a teenager, Daisy watched her sister get shot to death in the driveway of her family house’s, and Max was in and out of gangs and prison before changing his life. Now they work as a team, intervening in street violence and gang disputes before they turn deadly - all while raising a new baby. But when Max’s past brings the FBI to their door and he suddenly disappears into the federal prison system, Daisy must fight – like never before – to save her family. Daisy & Max was commissioned for Al Jazeera America Presents, an original series featuring provocative, timely documentaries and series for acclaimed filmmakers around the globe.