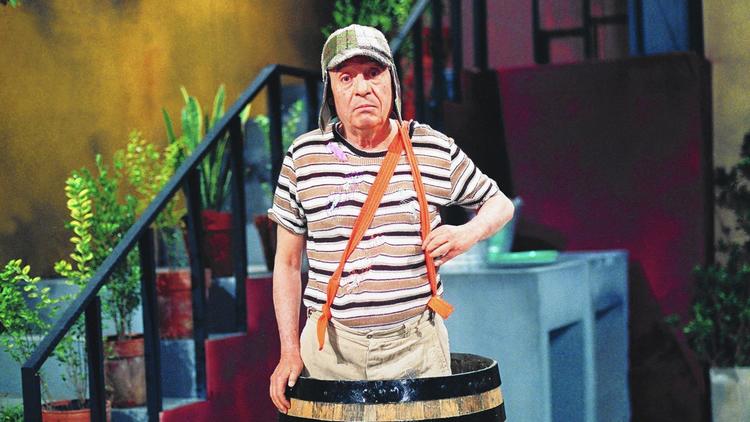 It is difficult to overstate the influence that Roberto Gómez Bolaños had on the childhoods of Spanish-speakers all over the globe.

Even viewers of "The Simpsons" owe a debt of gratitude to Gómez: Without his goofy superhero comedy "El Chapulin Colorado" ("The Crimson Grasshopper"), there would be no Bumblebee Man.

Last Friday's news of the death of Gómez — more commonly known by his nickname, "Chespirito" — generated an outpouring of mourning. Murals began materializing in Latin American cities. A South American news anchor teared up as she delivered the news. The Peruvian congress observed a moment of silence. And the Mexican president tweeted condolences — as did such entertainers as the rock band Molotov and pop singer Paulina Rubio.

I grew up watching "El Chapulin Colorado" and Gómez's other beloved children's show, "El Chavo del Ocho" ("The Kid at No. Eight"), as reruns here in the U.S. on Spanish-language networks and on South American TV during visits with family in Chile and Peru. One Halloween, I dressed up as Chilindrina, El Chavo's boisterous, pig-tailed sidekick. To this day, if something has spilled or some other disaster has unfurled, I turn to the words of El Chavo: "Se me chispoteó," roughly, "I messed up." It's not just me. The saying is now part of the language.

The last time I saw "El Chavo del Ocho" was a couple years back at a bar in Lima, Peru. This wasn't exactly the setting you'd imagine watching a 1970s children's TV show. The show was a slapstick sendup of the misadventures of an orphaned boy who hides out in a barrel and always, despite his best intentions, finds himself in mischief.

But that evening in downtown Lima, for an audience of office workers enjoying an after-work pisco sour, El Chavo and his friends — the bossy Chilindrina and the spoiled Quico — unleashed havoc with tacks and a bucket of glue.

As Chavo recited one of his best known lines — "fue sin querer queriendo" ("I meant to even if I didn't meant to") — a man at the next table hushed his companions. "Este Chavo me encanta" ("I love that Chavo"), he said. And everyone took a minute to admire the show, before going right back to their drinking.

On Sunday, a memorial for the comedian at Mexico City's Azteca stadium drew some 40,000 people. Dozens of children dressed as El Chavo and El Chapulin accompanied Chespirito's wooden coffin into the arena. The event received saturation coverage on Spanish-language networks in the U.S. I can only imagine how it played in Latin America.

There are many reasons why Gómez's comedies have endured. The actor was a gifted performer. His skittish, dim-witted superhero, El Chapulin, was all limbs and clumsy gesturing, while as El Chavo, he captured the innocent gestures and awkward body language of a boy who doesn't quite have a place in society. Gómez fused the zany physicality of Laurel and Hardy with the clever wordplay of Cantinflas, the Mexican comedian renowned for punny, nonsensical dialogue looped in endless circles.

But the programs went beyond pie-in-the-face pratfalls (though they contained plenty of that). As Gómez told the Mexican news magazine "Proceso" in 2006, he played with the idea of the inept Everyman established by Miguel de Cervantes in "Don Quixote."

"'Don Quixote' was written by Cervantes to make fun of chivalric novels," he said. "Looking at this in a proportional manner, El Chapulin Colorado was my satire of the Supermans and the Batmans who were so abundant in that era of superheroes. That was my version of the valiant hero like Don Quixote. If Superman could detain an asteroid from crashing into Earth and do anything that he wanted, then this would be my anti-hero. El Chapulin Colorado was short, ugly, dumb, weak and scared. Yet, he nonetheless faced problems and evils, so he becomes the hero."