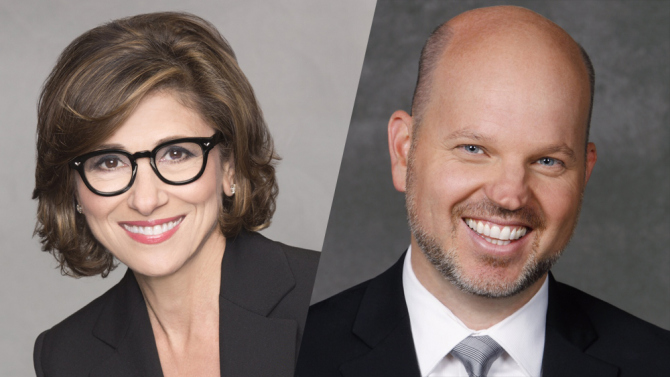 Nina Tassler is stepping down from her role of chairman of CBS Entertainment, Variety has learned, with plans to exit at the end of the year. She cited the pursuit of other creative endeavors as the reason for her departure, though she will remain with CBS in an advisory role through at least 2017.

Glenn Geller, currently EVP of current programming for CBS Network Television Entertainment Group, will take over CBS Entertainment in the role of president. He begins his new position immediately and will report to Leslie Moonves, president and CEO of CBS Corporation.

“Nina and I have been colleagues and friends for 25 years,” said Moonves on Tuesday. “It is one of the proudest partnerships of my professional life. We’ve enjoyed amazing success together, both here and at Warner Bros., and it’s been a privilege to watch her talents and accomplishments grow.”

Said Tassler, “I owe a tremendous debt of gratitude to Leslie, my colleagues at CBS and all the actors, producers and writers who were part of this incredible journey. I will always love this place, yet it is time for my next chapter, and I’m thrilled that I can pursue my other creative interests while still being part of the company.”

Though considered a rising star at the network, the choice of Geller, who’s been with CBS since 2001, is something of a surprise.

“When Nina told me her plans, we both knew we had an obvious successor in our own ranks,” said Moonves. “Glenn brings outstanding skills to all parts of the creative and production process, and he has led large programming teams both at the network and studio that oversee our biggest franchises and hit programs.”

Of Geller, Tassler added, “I pass the baton to Glenn with great confidence and pride. He is an outstanding leader with great respect for the artistic process and a clear vision for programming success.”

Tassler is the longest-serving of the current network entertainment chiefs and one of the longest-serving ever in a job that is notoriously volatile. She is widely regarded as one of the industry’s sharpest and savviest development execs with an eye for marketable concepts and distinctive new voices. She bought the concept that would become “CSI” in the room after it was passed on by ABC and others. Industry insiders also admire Tassler for her genuineness and courtesy in what can be a cutthroat business. She’s known as a straightforward, no-nonsense exec with strong relationships throughout the creative community.

Tassler, who became president in 2004, was the key architect of CBS’ strength with meat-and-potatoes procedural dramas and broad comedies with multigenerational appeal. She knew what resonated with the CBS audience, although she frequently tried to venture out of that comfort zone with shows ranging from “Joan of Arcadia,” “Viva Laughlin” and “Swingtown,” to name a few. “The Good Wife” was the rare exception that found a comfortable niche, and it has ranked as the most awards bait drama on broadcast TV in recent years, especially for its leading lady, Julianna Margulies.

Tassler has been Moonves’ right-hand programming exec at CBS for nearly 20 years, but their relationship goes back to the Lorimar era. When Moonves ran Warner Bros TV, Tassler as his drama development chief was instrumental in shepherding “ER” to megahit status at NBC.

Last season, CBS finished a close second to NBC for the adults 18-49 lead and was first again in adults 25-54 and total viewers. There were some underlying signs that it wasn’t a great season for the net, though, as it was down year-to-year in 18-49 despite the addition of the high-rated “Thursday Night Football” package to its lineup. “Scorpion” was a frosh hit for the network last season, while “NCIS: New Orleans,” “Madam Secretary” and “CSI: Cyber” were solid but unspectacular in earning their renewals. Tassler was instrumental, though, in securing the new late night lineup of Stephen Colbert and James Corden.

She’s currently at work on a book, “What I Told My Daughter: Lessons from Leaders On Raising the Next Generation of Empowered Women,” co-authored by Variety‘s Cynthia Littleton, a collection of essays from prominent female leaders about raising the next generation of feminists, which will be published by Simon & Schuster in April 2016.