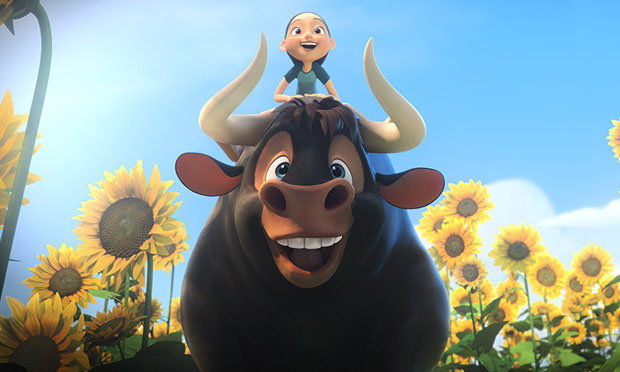 This winter has seen a variety of different releases of films directed by Latinx directors, including Cooco and The Shape of Water. Joining that list is the soon to be released film Ferdinand, directed by Carlos Saldanha.  We can expect to see this in theatres on December 15th 2017.

Carlos Saldanha, who is known for his work in the Ice Age and Rio franchises. Needless to say, Carlos Saldanha is an animated animal expert.  With his latest, Ferdinand, Saldanha gives his take on the classic story of a pacifist fighting bull, first told in Munro Leaf’s classic 1936 children’s book, and later, in an Oscar-winning Disney short. A 2004 Oscar nominee for his Gone Nutty animated short, Saldanha would take Blue Sky Studios to its fourth Oscar nomination if the film makes it into the final batch of animated contenders.

The film also features the voices of a variety of other Latinx individuals such as the NALIP Lupe Award Winning Actress and advocate Gina Rodriguez (Una). Viewers will also be hearing the voices of Juanes (Juan), Gabriel Iglesias (Cuartro), and Belita Moreno (Shopkeeper). NALIP is thrilled to see many Latinx individuals showcasing their talents in a feature animation.

In an interview with Deadline, Carlos discusses a film with a message of tolerance, kindness and love.

How did Ferdinand come together?

I was still working on my first Rio, actually, when I started to toy with the idea of telling the story of Ferdinand. I was thinking about developing a story about a bull, and Fox talked to me about the possibility of getting the rights for Ferdinand.

The book talks about a bull that doesn’t want to fight, but as I talked to people about the book, the true message for me was being true to who you are. Just because you look like a big fighting bull doesn’t mean that you are not gentle, doesn’t mean that you want to be a fighting bull. Even though this is the core message, there’s a lot of sub-messages there, like, “Maybe the only fight worth fighting is the fight to be true to who you are.” But you don’t need to do it by literally fighting. You can do that through tolerance, by accepting others.

That’s how I started to create the characters surrounding Ferdinand—they all face the same struggle. When Ferdinand comes into their lives, he wins hearts, makes true friends, and with tolerance, he changes the world around him

How would you describe the visual style you conceived of for this film?

It’s much more emotional, it’s much more centered in one character—Ferdinand and his journey. I wanted it to take place in Spain, and in Spain, the colors are different, the palette’s warmer. The palette is more about the shades of reds and oranges and the earth tones, and I wanted it to feel rich that way. I really wanted the movie to feel different and special, but true to the place that I was trying to show.

To Read the full interview, please go to Deadline.