You could almost taste the optimism this morning at the 10th annual California Film Commission breakfast as local film commissioners from around the state chowed down on bacon and eggs with a side order of hope for better days to come. The reason for the cheery mood at the Sofitel Hotel, of course, is the state’s new $330 million annual tax incentives program, which kick in later this summer. California’s old $100 million incentives menu left many producers hungry and sent them to dine out of state. 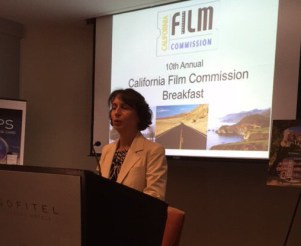 Amy Lemisch, Executive Director of the California Film Commission, gave a brief overview of the new incentives package and urged producers to apply online starting May 1. She said the old lottery system, which ended this year, dished out $800 million in tax credits since its inception in 2009, generating $6 billion in aggregate direct spending in the state. That’s expected to more than triple under the new program, which state and local film officials hope finally will stem the flow of runaway production.

Just how important tax incentives are to keeping productions in the state was laid out by the production team behind last year’s Nightcrawler, who took part in a panel discussion. Writer-Director Dan Gilroy and producers Jennifer Fox and David Lancaster explained that they couldn’t have shot the film in Los Angeles without the tax credits. For low-budget films like Nightcrawler, Gilroy said, “The financing parameters are so tight that the tax credit is the difference between whether you shoot in LA or not.”

Gilroy also said he couldn’t believe how many members of his crew told him that they hadn’t worked on a film in Los Angeles in years; one crew member told him it had been five years, another said eight. “It’s incredible that it’s become rare to shoot in Los Angeles,” the filmmaker said.

Hopefully, that will change when producers get a taste of the new tax incentives.