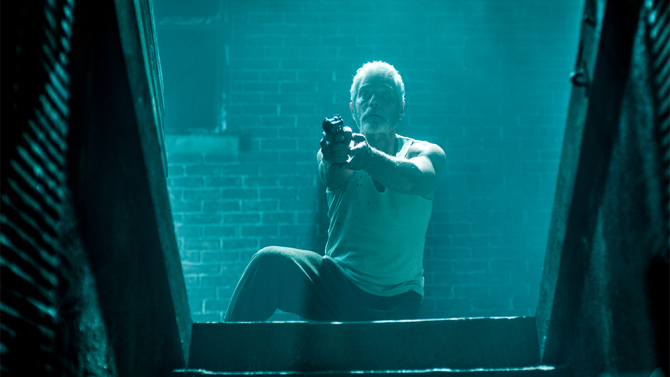 The Sony-Screen Gems movie has been forecast to lead a mild weekend at the domestic box with about $12 million at 3,051 sites. That should be enough to top the fourth frame of Warner Bros.’ “Suicide Squad,” which is expected to gross in the $10 million range and finish the weekend with more than $280 million in the U.S.

“Don’t Breathe,” directed by Fede Alvarez, centers on a group of teenagers who break into the home of a blind man in order to steal money, only to find themselves in a desperate fight to stay alive. The film, financed by Sony Pictures’ Stage 6 Films and produced for less than $10 million, has been building buzz for its core fan audience with screenings at Comic-Con and SXSW.

“Don’t Breathe” stars Jane Levy, Dylan Minnette, Daniel Zovatto and Stephen Lang as the blind man. The film was produced by Ghost House Pictures and Good Universe. Reviews have been strong with a current 89% fresh rating on Rotten Tomatoes.

Lionsgate’s action sequel “Mechanic: Resurrection” is launching at 2,258 locations Friday  with forecasts for a moderate opening in the $6 million to $8 million range. Jason Statham stars as an expert assassin forced out of retirement to commit a trio of killings in order to save the kidnapped love of his life.

“Mechanic: Resurrection” is opening five years after “The Mechanic,” which grossed $62 million worldwide on a $40 million budget.

The Weinstein Company is opening boxing biopic “Hands of Stone” at 810 screens this weekend amid expectations for a debut in the $3 million range. It will add about 1,700 locations next weekend. Edgar Ramirez plays the durable Panamanian pugilist Roberto Duran and Robert De Niro portrays trainer Ray Arcel.

Roadside Attractions and Miramax are opening “Southside With You” at 811 locations with forecasts for a finish around $2 million. Parker Sawyers stars as the young Barack Obama while Tika Sumpter portrays Michelle Robinson on their first date in 1989.

Check this out at: Variety.com