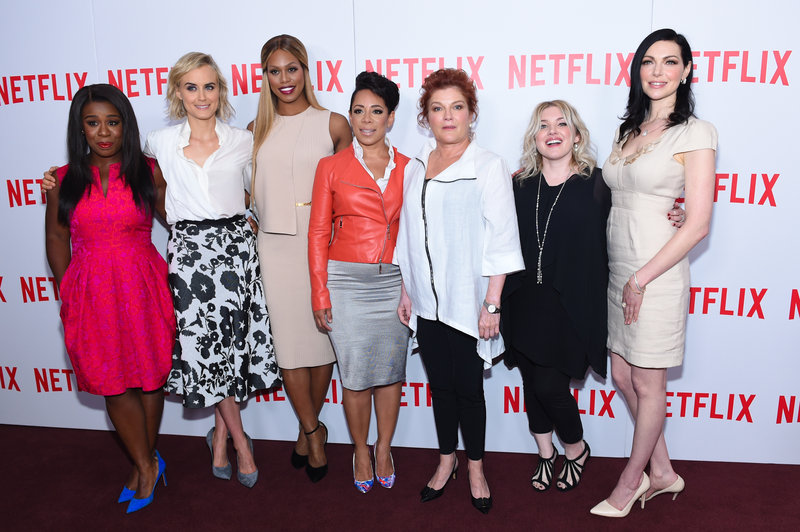 In today's crowded TV landscape, the casting director's job is no small thing. And that talent will be honored at the Emmy Awards next month. Jennifer Euston, who has been in the casting business for two decades, has been nominated this year for outstanding casting for a comedy series and for a drama series.

"I get the script, I read it, I break it down. Anyone who has a speaking part is my responsibility," she says. "Even if the person says, 'Hi' — one word."

Euston's first gig was on Law and Order. In recent years, she's been at the top of her game, crafting Emmy-nominated casts for shows like HBO's Veep and Girls.

Her most decorated show right now is Orange Is the New Black on Netflix. It's a women's prison comedy and drama that tells the story of not just its heroine — an upper-middle-class New Yorker locked up on an old drug charge — but also of the diverse group of women around her. On a different show, these actresses would likely have been relegated to bit parts — maid, cashier, city clerk.

While casting Orange Is the New Black, Euston says she thought of the many talented women she had worked with in the past whose skills were being underutilized.

Euston says she was given only the screenplay for the pilot episode when she made her casting picks: "I didn't realize how many of [these actors] were going to become such huge parts of the show and become such series regulars." It worked out, she says, because made sure to choose women she trusted, who could take on bigger roles if needed.

It's because of her work with shows like Orange Is the New Blackthat Euston is now recognized as a leader in diverse casting. But the question of diversity remains a sensitive and charged issue in Hollywood. Earlier this year, a controversial article in Deadline Magazine suggested the trend toward diversity in television casting was "too much of a good thing."

Euston says she makes casting recommendations, but the showrunners make the final call on which actors to hire. And it's the showrunners and writers who put together the storylines. Euston has often been handed scripts that almost exclusively feature Caucasian men. In those cases, she says, "you do your best to sort of offer alternatives, if you can."

More recently, Euston says she's been lucky to work on shows that feature diverse characters. "I've been given this gift in the past few years of these really amazingly strong women writing about women of shapes and sizes and ages and color," she says.

Read and Listen to more on NPR.com