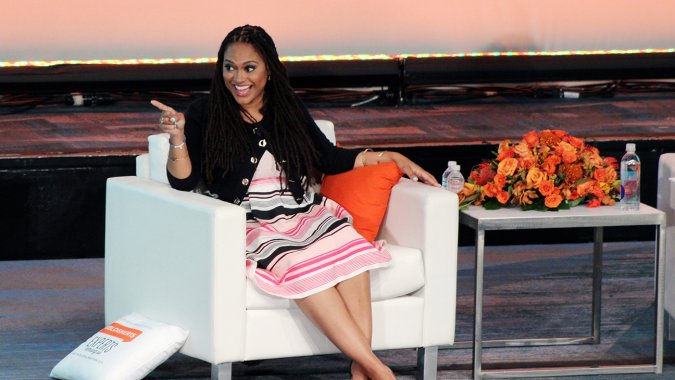 Ava DuVernay shared advice on how to get ahead in an industry in which she finds herself to be a minority.

"You gotta follow the white guys. Truly. They’ve got this thing wired," she advised during her closing keynote at the 2015 BlogHer conference, held at the Hilton in New York City. “Too often, we live within their games, so why would you not study what works? Take away the bad stuff — because there’s a lot — and use the savvy interesting stuff and figure out how they can apply. It’s a good one for the ladies.”

The Selma helmer continued to the ballroom of female bloggers, "Women have been trained in our culture and society to ask for what we want instead of taking what we want. We've been really indoctrinated with this culture of permission. I think it’s true for women, and I think it’s true for people of color. It’s historic, and it’s unfortunate and has somehow become part of our DNA. But that time has passed.”

And learning from Oprah Winfrey’s early days with OWN, DuVernay passed on the advice to “diversify — I’ve been in a lot of rooms lately, and all these fancy people who are really killing it, no one has all her eggs in one basket.”

She’s practicing it herself — in addition to her new OWN series Queen Sugar and her CBS civil rights crime drama pilot For Justice, she’s venturing into virtual reality. "It will be the future of storytelling," she told the founder and editor of Women and Hollywood, Melissa Silverstein, who moderated the conversation. "It’s really exciting and scary, and I want to know how to do it. … I shoot my first one just to experiment with the tools in August."

DuVernay also opened up about her meetings with Marvel. “It was really an enlightened day in terms of the quality of journalism,” she said of the reports that she had signed on to direct Black Panther, the first Marvel movie starring a black superhero (Chadwick Boseman).

When asked about meeting repeatedly with Marvel head Kevin Feig for the opportunity, DuVernay didn’t get excited about it until she did her research on the character and the potential cultural impact. "For me, it was a process of trying to figure out, are these people I want to go to bed with? Because it’s really a marriage, and for this it would be three years. It’d be three years of not doing other things that are important to me. So it was a question of, is this important enough for me to do?"

"At one point, the answer was yes because I thought there was value in putting that kind of imagery into the culture in a worldwide, huge way, in a certain way: excitement, action, fun, all those things, and yet still be focused on a black man as a hero — that would be pretty revolutionary," she continued. "These Marvel films go everywhere from Shanghai to Uganda, and nothing that I probably will make will reach that many people, so I found value in that. That’s how the conversations continued, because that’s what I was interested in. But everyone’s interested in different things."

"What my name is on means something to me — these are my children," she said of her body of work. "This is my art. This is what will live on after I’m gone. So it’s important to me that that be true to who I was in this moment. And if there’s too much compromise, it really wasn’t going to be an Ava DuVernay film."

She amicably compared the opportunity to guest-directing a Scandal episode. "Scandal is Shonda [Rhimes]' world, and I was there to serve her vision, in her world — a fabulous world!" DuVernay said.

Still, of the Black Panther film, she noted, “I think it should be good when it comes out. I’ll be there, watching.”

Read more at The Hollywood Reporter.