Got a script you'd like to see made into an indie feature? Then you must read this article. 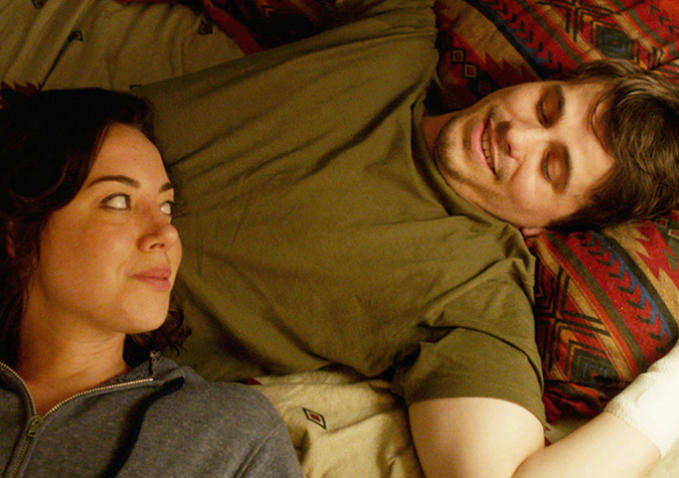 It's unusual for a producer to act in the movies he produces, but then again the transition of Adam Saunders from actor and theater company founder to producer isn't typical either.

As the CEO of Footprint Features, Saunders produced and acted in the company's first two feature films: "Family Weekend," starring Kristen Chenoweth and Matthew Modine, and "About Alex" with Aubrey Plaza, Max Greenfield and Jason Ritter, which opens on Friday.

Saunders certainly has the acting cred. After receiving a MFA from the Yale School of Drama and a certificate from the UCLA School of Film and Television, he served as co-founder and Artistic Director of the critically acclaimed theater company Footprint on the Sun, which served as the foundation for Footprint Features. But while he continues to act, producing is really his main focus. "I think in a perfect world I could play a little small parts in the movies that we produce, but it's certainly not the focus and I do really get great fulfillment and love producing in its own right," Saunders recently told Indiewire.

Now at Footprint Features, Saunders and his team are actively searching for new talent for medium-budgeted (under $10 million) indie films. Indiewire recently spoke to Saunders about being an indie film producer and what sort of projects he's looking for.

How many films are you looking to produce each year? Two to three?

Yeah. So we did one last year, one this year. We've got another one that we're starting production on in the fall and then we've just acquired the rights to another one. So we're on track to do two next year. The game plan here is to continue to grow – two next year, then, the year after that, three. We want to get progressively bigger. But yeah, we're moving into two to three films a year over the next couple of years.

Why focus specifically on the $5-to-10 million-dollar range? Is that a range that you think is just not being covered elsewhere?

Well, first of all, the range that we're in is under $10 million. "Family Weekend" was a lot smaller, and these next couple of movies are in the $3-to-5 million range and after that, we're going to move into the $7-10 million range.
We started as a theater company, so we're drawn to these sort of character-driven pieces. That's just our natural aesthetic. When I first got into producing, I was told that Jerry Bruckheimer says, "The movies you should produce are the ones you want to see." And so, for us, those are the kinds of movies that we want to see -- these sort of character-driven stories about human beings, which, by definition, lend themselves to fewer locations, fewer actors and smaller production costs. It's an under-served part of the market. You've got the studios moving farther and father into these tent poles and you've got microbudget filmmakers making genre pictures under $1 [million]. And so we're kind of in that middle space where a lot of great films are.
Aside from just films that you'd like to see, can you say exactly what makes a Footprint Features project?
The mandate is character-driven, accessible to the mainstream and under $10 million budget... If it's about people. We're not really going to do action movies or horror movies or, you know, things like that, but if it's a story about people and it's a story that we feel we can do on a limited budget, then that's sort our mandate.
Are you actively looking for scripts and new talent?
Yeah, all the time. We've got great relationships with, obviously, all the literary agents in town and with writers themselves, specifically building relationships with writers that we believe in. We read samples from all mediums – TV writers as well. We meet to talk about putting movies together. We're always putting together projects. We have a development team here and try to find things that fit our mandate.
Do you accept unsolicited manuscripts?
Yeah, we do. You can go to our website, which is footprintfeatures.com, and there's actually a button on their that says, "I've got a script" and basically you can fill out a script submission form where you can write down the log line and the genre and  the proposed budget...then if it feels like something that we would be interested in, we'll ask them  to fill out a script submission. They have to sign a release and after that, they'll send the script. So basically there's just a little bit of pre-screening to make sure it's something that fits our mandate and it's a budget we can work in. And then if that's the case, we will. We read unsolicited stuff all the time.
What would your advice be for screenwriters who are interested in having you make their film?

When you're writing the script, I think it's important to think about whether it's produceable – certainly, when you're coming to a smaller company or a company that wants to make movies in this budget range. If you open with "volcano explosion" or "car chase" or something that immediately makes my eyes go, "Ok. This is just going to be a nightmare" -- don't do that.

Following its premiere at the Tribeca Film Festival, Footprint's "About Alex," written and directed by Jesse Zwick, was acquired by Screen Media Films. The film will receive a day-and-date release in theaters and on VOD on Friday, Aug. 8.

Check this on Indiewire.