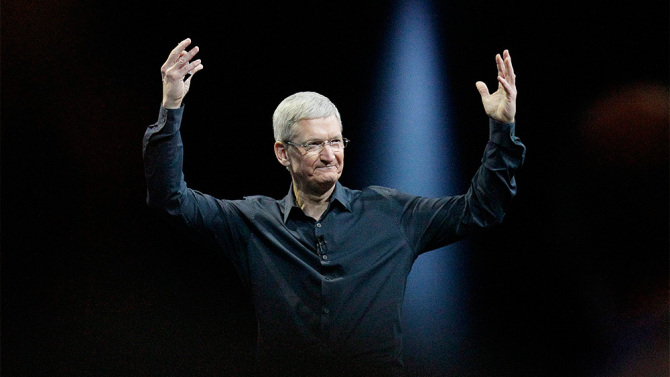 The moment the media and technology industries have been expecting for years may finally be arriving: Apple is exploring getting into the original programming business.

Sources indicate the Cupertino, Calif. colossus has held preliminary conversations in recent weeks with executives in Hollywood to suss out their interest in spearheading efforts to produce entertainment content. The unit putting out the feelers reports into Eddy Cue, who is Apple’s point man on all content-related matters, from its negotiations with programmers for Apple TV to its recent faceoff with Taylor Swift.

The scale of Apple’s ambitions vary depending on whom is asked, but one high-level executive who talked with the company said the goal is to create development and production divisions that would churn out long-form content to stream in a bid to compete with Netflix. Apple is hoping to put a headhunting firm on those hires in the coming months, according to source, with the goal of being in operation next year. Unknown is whether the focus is on TV series, movies–or both.

Other sources described the company’s exploration as more of a flirtation, though pointed to one recent sign that an escalation of interest is clear: Apple is said to have made an unprecedented bid to secure the stars of “Top Gear” when they exited their BBC series earlier this year. But Amazon ended up winning the bidding war for Jeremy Clarkson, James May and Richard Hammond in July.

The prospect of Apple going Hollywood has been bandied about for at least as long as the decade that has passed since Steve Jobs joined hands with the studios to make TV shows and movies available on iTunes. Given the often fractious relationship between the media and technology sectors, there’s often been curiousity as to why Apple doesn’t just build its own content capabilities, if not acquire a studio outright.

Such a move would have huge implications in the content world, potentially setting up a showdown with other streaming juggernauts including Netflix, Amazon and Hulu. Apple’s entry would sharpen a double-edged sword those companies are already swinging at Hollywood: A powerful new competitor that could steer eyeballs away from the traditional pay-TV world but also possibly a new buyer for content from existing studios.

For Apple itself, getting into original programming would be significant but not necessarily earth-shattering. While financing its own exclusive content would be an interesting strategic shift that could better arm Apple in its global war against other tech giants like Amazon, Google and Facebook to be the ecosystem where users spend the most time, the hundreds of millions–perhaps billions–of dollars necessary to get into TV and movies is chump change to CEO Tim Cook, who has over $200 billion in cash on the corporation’s balance sheet at his disposal.

Given how early Apple is in the process, details are sketchy at this point. It is unclear, for instance, if the company intends to structure itself like Netflix and work with outside production entities or attempt Microsoft’s ill-fated Xbox model, which entailed setting up an internal studio.

Another area where Apple can organically grow its content efforts is in independent film, where the company has quietly been snapping up content on the festival circuit for distribution on iTunes for years. One source familiar with Apple’s efforts in that business says expanding into original content has been mentioned by Apple reps as a possibility.

Another big question mark is what shape Apple’s content play would take; the company has been criticized for leaving the door open for Netflix’s a la carte model to flourish by opting for a transactional business instead of the subscription VOD route that has proven to get more traction with consumers. Monthly price–if that’s even the model Apple chooses–would be key given the competitive marketplace, though it’s conceivable there wouldn’t necessarily be a price if Apple chose to go the ad-supported route, a path it has contemplated in various iterations of its Apple TV strategy.

That device, which is expected after years of languishing to get a significant upgrade at a press event Apple is hosting next week, could be central to the company’s content plans. With long-developing plans for Apple to employ a virtual-MSO strategy akin to Sling TV or Sony Playstation Vue still in limbo as content owners drive a hard bargain, it’s possible the company is willing to take on filling the content pipeline itself to at least supplement the service. But it’s highly doubtful the programming piece would be in place by next week, let alone any time this year.

Apple has also shown it’s not averse to pivoting content strategy in the streaming music business, where the recent launch of Apple Music was clearly a response to the success subscriptions have achieved with rivals like Spotify.

Apple Music is also where the company has dipped a toe into original content production for both audio, the format of its celebrity-studded Beats 1 radio program, and video, where some chart-toppers have created music videos with Apple’s backing. Some sources say that the original content efforts could end up being an extension of that strategy.

Episodic video content would be a significantly bigger outlay, though how big will be determined by whether Apple puts an emphasis on long-form scripted fare or hedges its bet with more unscripted content, where YouTube in particular has made a more modest investment betting on digital-native talent.

YouTube recently raised eyebrows by luring MTV programming chief Susanne Daniels to head its original content efforts. Regardless of what strategic direction Apple goes in on the same front, it’s a sure thing that a company as well capitalized and impeccably branded as Apple is it will attract top-shelf executive talent.

Cynthia Littleton contributed to this report.