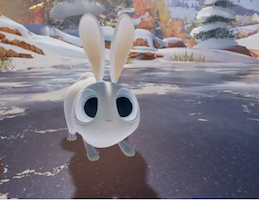 Two adorable aliens are standing in front of me, waiting to zap me into oblivion.

The logical part of my brain knows they're not actually there. But thanks to the power of virtual reality, I feel like they actually exist.

This is the world of "Invasion," an animated VR short film by Baobab Studios. Founded by Maureen Fan, former Zynga vice president of games, and Eric Darnell, director of films like "Antz" and "Madagascar," the pair are passionate about VR as a storytelling medium.

"The first thing we do is look at how to tell that story in a way that can be staged for a viewer who's actually inside the story as well," Darnell told me as we sat in Baobab's offices in Redwood City, California, to discuss the making of the film.

As I put the headset on for the first time, Fan told me to look at my feet. I saw the bunny's body instead of my own -- I was part of the story too.

When the film's bunny protagonist appeared, she spotted me from a distance and hopped over to stare me in the eyes. "On the more advanced headsets that track your position through space, she will actually track you as you move around," said Darnell. "This is much more powerful than I ever anticipated."

Live action VR is filmed using a 360-degree camera array. This can be made up of multiple cameras in the case of the GoPro Omni, or a single camera with multiple lenses in the case of the Nokia Ozo. Footage then needs to be stitched together in post-processing to create the final 360 video.

In animated VR, the Baobab team uses an imaginary camera that "films" everything at the same time, so no stitching is required. The entire world can be generated in every single frame, but the viewer only needs to sees what's in their point of view so that's loaded in the headset.

"There's no reason why a viewer couldn't look up and watch the clouds roll by for the entirety of this piece," said Darnell, "so we need to do things to help the viewer know where they should be looking."

Spatialized audio helps direct the viewer's attention, but visual cues are also important too. For example, after spotting the viewer and making eye contact, Chloe -- the fuzzy main character -- looks off screen which prompts the viewer to turn and look at what she's seeing.

Darnell and Fan discuss more of the making of the film in the video above.

Check this out on cnet.com