Before Hollywood became the epicenter of America’s nascent film industry, New York City played a major role with the world’s first commercial motion picture exhibition right here in our city in 1894.  Many studios sprang up around the city including two in The Bronx:  First Edison Studios in Tremont just north of Crotona Park (which opened in 1907 and eventually closed its doors in 1918) and Biograph Studios which ran from 1912 in Bedford Park until the 1970s (in 1956, after being closed for several years, it reopened as America’s largest film studio outside of Hollywood).

Now, York Studios is set to bring Film & Television back to The Bronx with the construction of 3 buildings totaling about 300,000 square feet on a 10 acre lot in Soundview along The Bronx River which was purchased by the company for $7.2 million in October of 2012 (the property is actually an assemblage of 3 separate, adjacent lots). 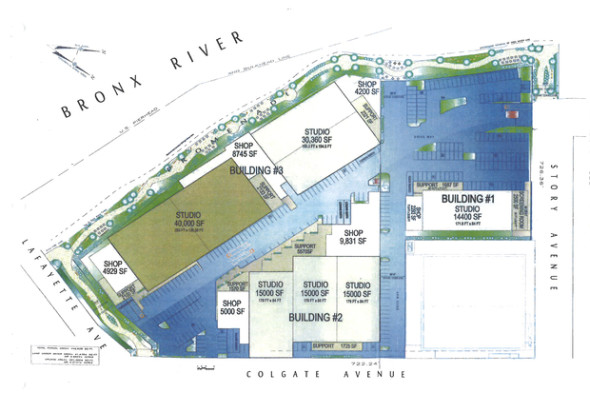 York Studios proposed site along the Bronx River in Soundview.

The company currently operates out of a 40,000 square foot facility in Queens where the hit television series ‘Elementary’ is filmed.  The studio also has under its belt the ‘The Amazing Spider Man 2′ among its credentials.

Edwin Pagán, filmmaker and former board member of the National Association of Latino Independent Producers (NALIP) said, “Film production has deep historical roots in the Bronx and the concept of a major film studio being built in the borough is a very intriguing proposition, and could, potentially, become a catalyst for long-term economic revitalization in the region.”

As like many others who have been talking about York Studios settings shop in our borough, Pagán raises the important issue of how such a project can really impact our youth and community.  He says:

“The creative medium of film, with its varied disciplines and vocations, would provide an excellent opportunity for apprenticeship programs for the local community, especially youth and the many filmmakers who call the Bronx home. It would be great to see the studio create “shadow” training initiatives where young people are linked with mentors and receive hands-on production experience in set-building, lighting, makeup, wardrobe and other production crew responsibilities, with the ultimate goal of having them become part of the related unions and can build careers in the industry. We hope the investors have this kind of vision purpose-built into their overall long-term plans.”

We know how our borough is full of talent and the arts in all disciplines and not least of all the television and film industry with Woody Allen, Alan Alda, the late Lauren Bacall, George A Romero, Penny Marshall, Tracy Morgan, Regis Philbin, Sonia Manzano, Kerry Washington, Jennifer Lopez, Stanley Kubrick, and so many others either born here, raised here, or both.

The site, although a long walk from the nearest subway station at Elder Avenue on the 6 line, is just minutes from the Bruckner Expressway.

Construction is scheduled to begin this summer and be completed by Summer 2016.  Currently, no files have been submitted to the department of buildings as per their website.

What are your thoughts on this project?

Check this out at WELCOME2THEBRONX.com