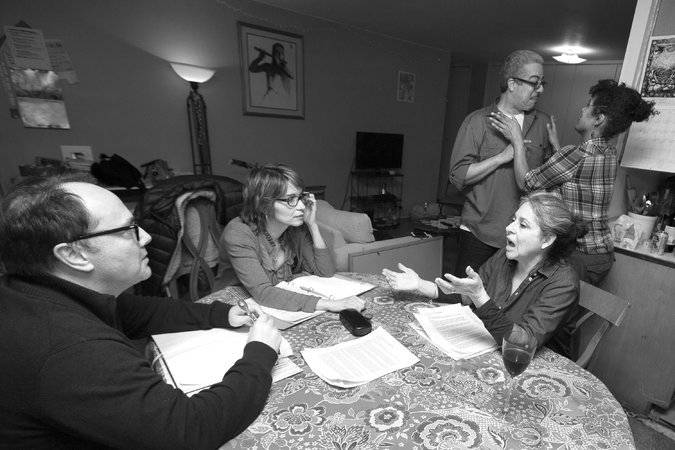 Television and movies changed Sonia Gonzalez-Martinez’s life. She chose her major in advertising design at the Fashion Institute of Technology after watching the 1980s sitcom “Bosom Buddies,” in which Tom Hanks and Peter Scolari goofed around at an ad agency. “It looked like fun,” she said. “But then I learned it was all about selling people things they don’t need.”

Though Ms. Gonzalez-Martinez stayed to finish her associate degree, she had an epiphany while watching the credits appear during a film: That world could be fun, too. Guided by little more than enthusiasm, she applied — and was admitted — to film school at New York University. For a Puerto Rican woman from the Bronx and Washington Heights in Manhattan, it was was another universe.

“It was a rich white kids’ school, and I felt super intimidated,” Ms. Gonzalez-Martinez said. “Thank God I had a friend there, a man of color, who told me to take it easy, it’s fine. He told me that everything I have to say and contribute is as valid as anybody else.”

That advice stayed with her as she pursued a career in film and television, starting with an early break from Spike Lee, who hired her as an apprentice film editor. Ms. Gonzalez-Martinez went on to work with the directors Milos Forman and Alan J. Pakula and as an editor on numerous documentaries. More recently, she has been writing and directing “Get Some!” It’s a web series about Sam and Viv Martell, a 40-something middle-class Latino couple trying to keep the spark in their relationship.

Ms. Gonzalez-Martinez said she understood the criticism about the lack of Latinos on “Saturday Night Live,” as well as the outrage after the Academy Awards overlooked black actors this year. While hashtag activism and boycotts are fine, Ms. Gonzalez-Martinez said she and her team are focused on expanding “Get Some!” into a 22-minute television pilot they hope will find a distributor.

“As far as #OscarsSoWhite, I don’t personally care about it, because this same problem has been around for years and years,” Ms. Gonzalez-Martinez said. “Latinos have always been on the verge, always hovering. So as hard as it is to make a web series, we’re doing it anyway because nobody is coming to us to give us an opportunity. We’re going to make it ourselves. We are going to tell the stories we want to tell.”

Those stories start inside the Upper West Side apartment of Tammi Cubilette, an actress and writer who, with the comedian Angelo Lozada, are the main characters of “Get Some!” and production partners with Ms. Gonzalez-Martinez. Last Monday, they sat around the dinner table with Joseph and Gloria La Morte, the show’s producers, to flesh out characters for the pilot.

In writing the show, they looked for universal situations facing a middle-class couple — he’s a chef, she’s a teacher — who happen to be Latino. Will Sam have his own restaurant? Will Viv become a principal? What about their neighbors, such as the somewhat clueless young rapper introduced in a past episode?

They see the couple’s lives reflecting those of their generation, straddling the analog and digital eras. More important, they see them as stand-ins for middle-class viewers who are struggling to pay the bills, get ahead and stay sane.

“If you’re going to have good content, you have to write what you know,” Ms. La Morte said. “If a writers’ room on a series only has a certain demographic, that’s what they’re going to write well. It has to start on the page.”

Mr. Lozada, who warms up audiences for Trevor Noah on “The Daily Show,” agreed. But he added that if their pilot were to be picked up for television, the writing team would have broader representation.

“Every day we deal with diversity,” he said. “Not a day goes by that we don’t interact with someone black, Latino or white. So why is it when we are creating does it have to be this little bubble?”

Ms. Cubilette, who was a cast member on John Leguizamo’s comedy show “House of Buggin’,” added that while minority actors, writers and directors go back and forth between cultures, the same cannot be said for their white counterparts.

“Not to make this us and them, but you want everybody in the writers’ room,” she said. “Yet the onus always seems to be on us, the people of color, to know about them and include them. Of course we’re aware of them. But they don’t think in those terms about us. How do they relate to people of color? They don’t, so they don’t write about it.”

The team is continuing to develop a pilot that will show it at its best. For Ms. Gonzalez-Martinez, it is a form of activism that goes beyond social media outrage or boycotts.

“I’d boycott the Oscars because they’re so boring,” she said. “Boycotting them doesn’t change institutions. We have to keep producing the content and find the people to champion it. I don’t know where they are, but we’re creating it.”

Check this out on nytimes.com