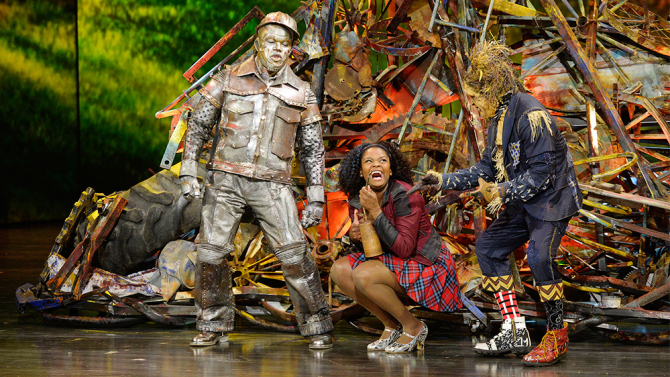 It's Also the Most-Tweeted Live Special Program on Record

Two years after NBC stunned the industry with boffo ratings for its live presentation of “The Sound of Music,” the network was back at it Thursday night with “The Wiz Live,” which drew impressive numbers of its own. The event also set a Nielsen Twitter record as most social live special program in the more than four years of tracking such numbers  — generating more reactions than NBC’s two prior musicals combined.

Despite facing a highly rated NFL game on CBS, last night’s live musical, whose all-star cast included Queen Latifah, Mary J. Blige and David Alan Grier, averaged a 3.4 rating/11 share in adults 18-49 and about 11.5 million viewers overall from 8 to 10:45 p.m.,  according to preliminary Nielsen estimates. The only NBC entertainment series to fare better this fall is “The Voice,” whose season premiere averaged a 3.5/11 in 18-49 and 12.37 million.

The big ratings and Twitter numbers for “The Wiz Live!” aren’t a surprise based on strong early social-media interest for the project. Shareablee, a social media analytics company, said “The Wiz” had captured more engagement than “The Sound of Music” and “Peter Pan” combined in the lead-up to the show. From Tuesday through Thursday, “The Wiz” posted 19 pieces of content on Facebook, which captured 60,579 actions (of which 65% was positive). In the same three-day window, “Sound of Music” had posted seven pieces of content and captured a total of 28,523 actions, and “Peter Pan” posted three posts on Facebook that garnered a total of 4,505 actions.

And last night during the 8-11 p.m. ET window, global digital marketing technology company Amobee Brand Intelligence said “The Wiz Live!” attracted 1.374 million tweets during its three-hour telecast window — more than four times the number generated last year during the live telecast of “Peter Pan Live” (360,000). Roughly 30% of the sentiment was positive, 58% neutral and 13% negative — meaning the Twitter sentiment was 133% more positive than negative around the broadcast. Shanice Williams, the 19-year-old actress playing Dorothy, scored especially well, with only 2% of the sentiment surrounding her performance considered negative.

CBS and NFL Network combined to win the night overall, with their coverage of the NFL game between the Green Bay Packers and Detroit Lions averaging a 12.0 overnight household rating. This should translate into a mid-5 demo rating and more than 17 million total viewers.There wasn’t much else happening on the broadcast front last night, though the CW took advantage of a lack of scripted originals. “The Vampire Diaries” (0.5/2 in 18-49, 1.3 million viewers overall) and “The Originals” (0.5/2 in 18-49, 1.2 million viewers overall) both rose in 18-49 from their prior episodes, with the latter hitting a season high in total viewers.