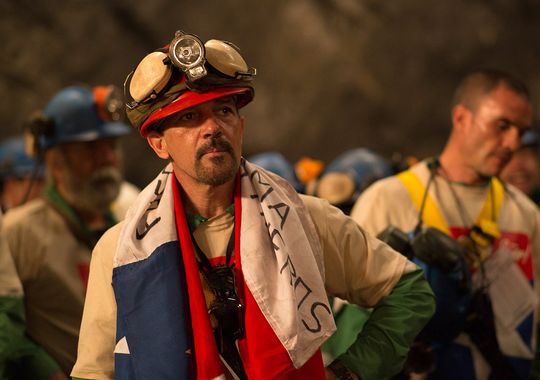 The story of the 2010 rescue of 33 miners trapped below ground in Chile for 69 days hits the screen with 'The 33,' starring Antonio Banderas and Lou Diamond Phillips. The U.S. trailer was released Wednesday. Warner Bros.

Director Patricia Riggen says she has been "in a mine for the last three years" making her film about the 2010 rescue of 33 Chilean miners. She is only partially speaking metaphorically.

Riggen immersed herself in the project, flying to Chile to meet with the miners who survived the grueling 69-day ordeal trapped underground before their celebrated rescue on Oct. 13, 2010.

But she also insisted on shooting underground in actual working mines for The 33(opens Nov. 13).

"Shooting on a (movie) soundstage would have been much easier, but it would not have been the same for any of us," Riggen says. "These mines looked real because they were real."

The filmmakers found two working mines in nearby Colombia that were suitable for the film crew. Shooting in these dark, foreboding caverns was instantly mood-changing and helped to tap into the miners' headspace.

"All of us having to walk in every day at 6 a.m. and walk out of there at 10 at night, it affected us," says Riggen. "There is no night or day. It's a very strong experience. It really made us understand, at least in a little way, what the 33 miners went through. We kind of lived the life of a miner during this time."

There were actual dangers even before filming started, when fire destroyed the set under construction within the mine. No one was hurt. But production started from scratch and the cast was forced on hiatus. It was a further reminder for precautions.

"Mines are dangerous," says Riggen. "It was not easy to shoot this movie."

Antonio Banderas, who plays lead miner Mario Sepúlveda, says there was an instant transition putting on a hard hat and traveling into the mine. He could taste metal in his mouth from the air.

"If you are afraid of being in closed places, this was not the place to be," says Banderas. "Even 12 hours in these conditions and it starts to get to you."Banderas recalls having to shoot his final scene, which featured Sepúlveda falling into a lake inside the mine. Banderas agreed to take the fall in the Colombian mine, despite concerns about the water's heavy mineral content.

"People were like, 'Are you sure you want to do this?' and I was so stupid that I said yes," says Banderas. "I regretted it right as I fell in. My eyes were going to explode. I don't know what was in that water."

Banderas said he flew back to Chile that night and was "vomiting for hours" before he recovered.

Ultimately, he was pleased by the performance, which was enhanced by the real-life mine experience.

"You realize how harsh it is to be a miner," says Banderas, "It's nothing like they live, of course, but you do know it."