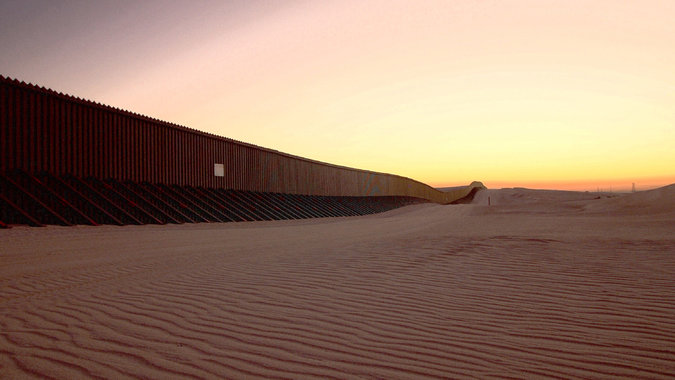 A Journey Into the Heart of the Border

In English and Spanish, with English subtitles

Opening with lush natural landscapes as its director, Rodrigo Reyes, speaks of trying “to imagine when borders did not exist,”“Purgatorio” suggests the arbitrariness of such divisions before embarking on a tour of the United States-Mexico line.

This vivid and haunting essay steps away from the debate about illegal immigration. Rather, Mr. Reyes hopes to convey the experience of living in this region of contrasts, juxtaposing its desert and mountains with bleached, sun-blasted images of decay and stasis.

“My homeland is very pretty,” says one young man intent on scaling a towering barrier into America. “The only problem is poverty. People are dying of hunger.”

On the Mexican side, conditions are often brutal and hopeless in communities that seem desperately poor: Junked cars are riddled with bullet holes; stray dogs are collected on the streets, then put down; even in crime-infested towns, the police are despised and accused of corruption.

On the American side, a good Samaritan puts out knapsacks of bottled water hanging in the brush, while a Minuteman type hopes to erase markers he says are used to define a trail. Border agents tell stories of migrants they have caught, and one official shows a warehouse of bagged, unidentified remains of some who died while crossing.

Mr. Reyes does not identify the individuals and towns he and his cinematographer, Justin Chin, have filmed in such searing detail. In choosing not to, he may hope his existential meditation underscores Robert Frost’s universal truth: “Something there is that doesn’t love a wall.”

Check this out at the New York Times.