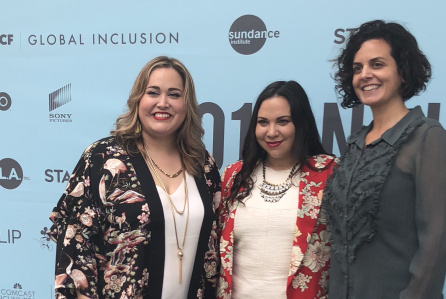 “It’s been really lovely to see how in some small part we can use this platform to help these people and families,” said One Day at a Time executive producer and co-showrunner Gloria Calderon Kellett of the effort initiated this week by TV writers to stop families being separated at the southern border by Donald Trump’s administration. “It feels like paying it forward,” added the daughter of Cuban immigrants, who were given sanctuary when they came to American decades ago.

“It was Tanya’s idea and we were just sick, we feel like what can we do?” Kellett explained of the outreach that Netflix’s ODAAT and Starz’s Vida, which is EP’d by Tanya Saracho, began on June 19. “Let’s start with the scribes,” she noted. “We just started it and reached out to rooms where we knew one of the writers or had connections. It really had impact and nobody said no.”

Kellett was joined on-stage on Saturday afternoon at the National Association of Latino Independent Producers Media Summit by the Vida EP and creator plus ex-Carmichael Show EP and current LA To Vegas consulting producer Danielle Sanchez-Witzel, “I cry every night, they do want us here,” said Saracho to the packed Hollywood and Highland ballroom of the reaction in the past few days to their campaign.