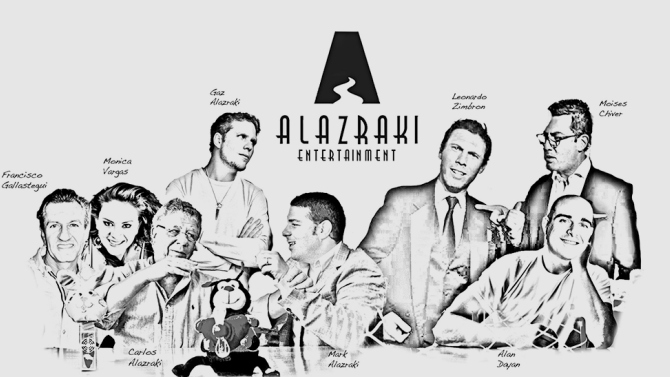 Adding another significant player to the companies working the U.S./Mexico interface, Gary Alazraki, director of "We Are the Nobles," and former Warner Bros. exec Leonardo Zimbron, a "Nobles'" producer, have joined forces to launch Alazraki Entertainment.

Alazraki will serve as chairman, Zimbron as CEO. With offices in Mexico City and Los Angeles, the tentacles of Alazraki Entertainment, an integrated production company, reach into movies, TV, live entertainment, online, commercials and production services.

"Our strong diversification is attractive for investors, offering collateralization and multiple options for recoupment," said Zimbron.

Also aiding its access to investorsand above all expertise marketing for the Mexican market and beyond, Alazraki Ent. will form part of Alazraki Networks, one of Mexico's biggest – and most diversified – of communications, PR, marketing, retail advertising and commercials companies. Carlos Alazraki, Gary Alazraki's father, serves as Alazraki Networks chairman. Alan Dayan, Alazraki Networks' CFO, is overseeing fundraising and fund management for the new company, aiding its quicker output on projects.

Alazraki and Zimbron will fold Alazraki Films, the lead production house on "Nobles," and Traziende Films – Zimbron's first shingle after leaving Warner Bros. and the producer of "Efectos secundarios" and "Pulling Strings" – into Alazraki Ent.

AE's commercials and production services will be offered via Bahia 5, a company headed up by Francisco Gallastegui. Monica Vargas will serve as AE's chief of operations, Moises Chiver as head of production.

Making "Nobles," his feature debut, Alazraki's "big dream," he said, was to break into Hollywood.

Times have changed. The riches-to-rags comedy-drama, which grossed $26.25 million in Mexico, becoming its highest-grossing local movie off all time, put Alazraki on Hollywood's radar, and brought down the flag on a clutch of movies – Eugenio Derbez's

"Instructions Not Included," now "Get Married If You Can " – which suggest a mass movie market for at least select Mexican films.

"The breakout we achieved in Mexico turned us into a company the studios were willing to look at. After Eugenio Derbez's success, they are looking at the Latino market here," Alazraki said.

"If I am in the U.S. I won't be able to do anything in Mexico, and vice versa. So I need a partner," he added.

Alazraki Entertainment will create what it sees as upscale modern entertainment for the Mexican and U.S. Latino markets.

Regarding movies, Alazraki said his new company plans to design projects with Mexico/U.S. crossover potential. It will identify "subjects that concern us as people, as a country, or a generation, wrap them in a good genre-driven story to appeal to wider audience and also give them something to talk about," Alazraki said.

As for TV, Alazraki Ent. aims to produce "high-end premium fiction entertainment in the form of what HBO, Netflix, and AMC have been doing but in Spanish, shot in Mexico, with stories that can actually start to speak to a higher-end audience, the more sophisticated viewers who have internet, cable, and a world culture, plus the aspirational middle-class that wants to move into that bracket, "Alazraki said.

"There's a market of 30 million viewers without high-end entertainment being made for them. We want to create a conversation with them," he added.

Alazraki Ent. will act as a talent hub. "It highly important for us to foster new talent that now has a business infrastructure to get their films done, and start to live off filmmaking," Alazraki commented.

It will also play off synergies between its divisions. Commercial production is a great training ground for bigger projects, Alazraki said.

"Some very interesting stories in films could be adapted for the stage," said Zimbron. "TV properties could create movies and vice-versa," he added.

AE also reps a drive towards "a self-sustaining industry that can start relying on other business structures besides fiscal incentives, combining co-production and foreign sales," Alazraki said.

First projects will be announced this month or early April.

Zimbron served as Warner Bros.' director of local production between 2005 and 2011.